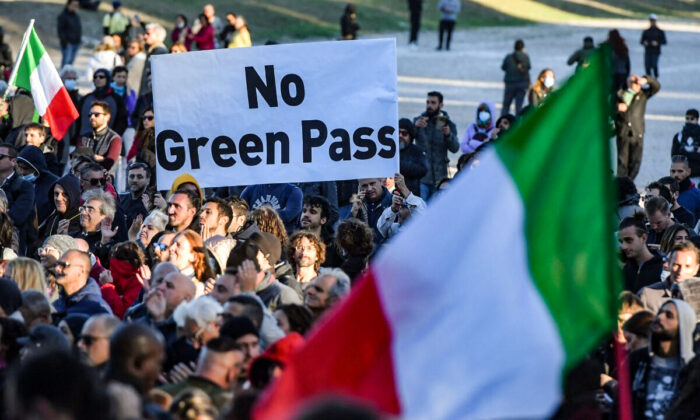 People gather during a protest against the so-called Green Pass on October 15, 2021 at Circo Massimo in Rome, as new coronavirus restrictions for workers come into effect. - Italy braced for nationwide protests, blockades and potential disruption on October 15, 2021 as all workers must show a so-called Green Pass, offering proof of vaccination, recent recovery from Covid-19 or a negative test, or face being declared absent without pay. (Photo by Tiziana FABI / AFP) (Photo by TIZIANA FABI/AFP via Getty Images)
Europe

The Italian government imposed one of the world’s strictest COVID-19 measures on Friday, requiring all workers in Italy to show a COVID-19 “Green Pass” prior to entering their place of employment.

Starting on Oct. 15, the new rule will make it obligatory for employees to show that they have been vaccinated against the CCP (Chinese Communist Party) virus, which causes COVID-19, before returning to their workplaces. A recent negative test or having recovered from COVID-19 in the past six months is also allowed.

However, according to provisions of the measure, the mandate stipulates that employees cannot be terminated from their job. The new rule will be effective until the end of the year.

Italy already required people to show such a vaccination passport to gain access to all sorts of indoor environments, including restaurants, museums, theaters, and long-distance trains, prompting demonstrations against the government-imposed restrictions in the country.

Thousands of Italians in opposition to the government mandates took to the streets on Friday, with protesters shouting “Liberta (Freedom)” and calling the move a political, rather than health, regulation.

“The Green Pass is a bad thing, it is discrimination under the law. Nothing more. It’s not a health regulation, it’s just a political move to create division among people,” said Fabio Bocin, a 59-year old worker from Trieste.

The largest demonstrations were at the major northeastern port of Trieste, where labor groups had threatened to block operations, and around 6,000 protesters, some chanting and carrying flares, gathered outside the gates.

In Rome, police in riot gear stood by during a rally where people shouted, “No Green Pass.” Other demonstrations also took place in Turin, Genoa, and Bologna.

The head of the USB Autonomous Union in Genoa said that in general, workers are not against the Green Pass 0r vaccination itself, but want “companies to pay for testing all port workers.”

Katya Steinhaus, a 28-year-old unvaccinated beautician, said the government’s latest move leaves her with no choice. She explained that having to undergo a swab test every two days convinced her to book and get a COVID-19 vaccine.

“Work is the first important thing in life,” Steinhaus said, the Anand Market reported. “I can’t do anything anymore.”

While some European Union states have ordered their health workers to get vaccines, none have made the vaccine passports mandatory for all employees, making Italy the first to do so on the continent.

About 15 percent of private and 8 percent of public sector workers in Italy have no Green Pass, an internal government document seen by Reuters estimates.

Italy—a CCP virus epicenter early in the pandemic—has among the highest vaccination rates in Europe.