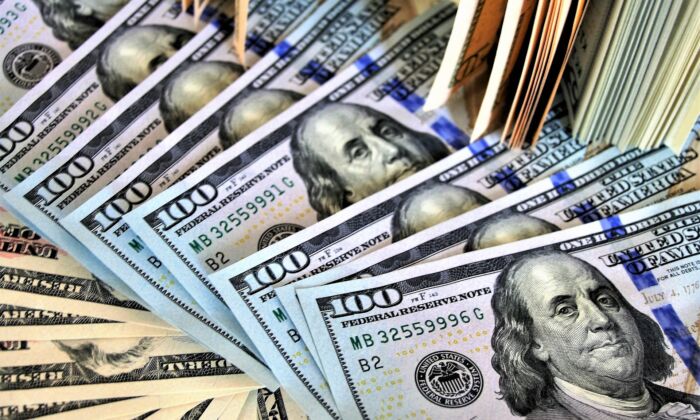 Is a Deflationary Crisis the Real Economic Danger Ahead?

Careful thinking should caution you not to wager the house on the assumption of future inflation. For starters, the Federal Reserve Bank of St. Louis has generously computed the velocity of M2 Money Stock.

Their analysis shows that the velocity of M2 money stock has plunged since the pandemic began. It is now at a 60-year low. This reaction contradicts the presumption that inflation is destined to soar as the Federal Reserve remorselessly multiplies our pure fiat money. The Federal Reserve Bank of St. Louis kindly observes: “A higher velocity is a sign that the same amount of money is being used for a number of transactions. A high velocity indicates a high degree of inflation.”

Therefore, it follows that a decades’ long low in the velocity of money in all probability does not auger for runaway inflation.

Suppose the rapidly increasing reserve theory necessarily led to high inflation when money increases faster than real output. How do you explain the low inflation of recent years?

When money velocity declines rapidly during an expansionary monetary policy period, it can offset the increase in money supply and even lead to deflation instead of inflation. That’s where I see the danger now.

This means that every dollar in the monetary base was spent only 4.4 times in the economy during that year, down from 17.2 times just before the recession.

This implies that the unprecedented monetary base increases driven by the Fed’s large money injections have failed to stimulate at least a one-for-one proportional increase in nominal GDP through its large-scale asset purchase programs. Thus, it is precisely the sharp decline in velocity that has offset the sharp increase in money supply, leading to almost no change in nominal GDP.

As Professors Richard G. Anderson, Michael Bordo, and John V. Duca of the Federal Reserve Bank of Dallas showed in “Money and Velocity During Financial Crises: From the Great Depression to the Great Recession,” the velocity of the M2 Money Stock has been scraping the bottom in a pattern not seen since the Great Depression.

So while you should stockpile gold, don’t go hog wild contracting debt on the assumption that your obligations will be swiftly erased by runaway inflation. That is unlikely to happen.

The vast gap between the real output of the economy and excess claims on that output, especially in the form of debt, leaves little doubt that excess claims on future production must be eradicated on a massive scale. By facilitating the over-expansion of debt, quantitative easing may have set a deflationary trap that could spring shut on you.

Even with the velocity of money at a 60-year low, unless I have somehow managed to persuade you, I am a member of a lonely club in thinking that quantitative easing has set a deflationary trap for the economy.

Yet the plunge in the velocity of money has restrained inflation, without question. Banks’ excess reserves with the Fed have swelled in the last few years, but money’s velocity has shriveled, partly because the banks have been conservative in difficult times. While the Federal Reserve policymakers pursued expansionary monetary policies, the banks have been risk-averse. Therefore, the liquidity flow into the real economy has been restricted by conservative banks. This links with the point that the growth in money supply does not completely reflect growth in economic activity.

Also, look at the strength of the dollar on currency markets. The dollar has soared, threatening to sink the Euro into a long-term bear market and slash European demand for commodities priced in dollars. Demand for commodities from South East Asia—notably Indonesia, Vietnam, Cambodia, and Laos—East Africa, and South America—Argentina, Brazil, and Venezuela—all have currencies that have lost value against the U.S. dollar.

The mercantilist confusion of macroeconomics supports the fallacy that countries prosper by devaluing their currencies. A devalued currency prices goods and services denominated in that currency at a discount. Of course, other things being equal, you can sell more goods and services at lower prices with a lower currency.

One of the slippery arguments for “inflation” is that it lightens the real value of debt. But this effect is only straightforward for debtors who earn dollars. For others, of whom there are many, dollar appreciation results in real losses.

According to the latest Bank for International Settlements estimate, the total stock of U.S. dollar-denominated debt of non-banks outside the United States stood at $11.4 trillion (BIS, 2018), of which non-banks from emerging market economies accounted for $3.7 trillion.

How do emerging market corporates fare during periods of currency depreciation? Federal Reserve Bank of St. Louis research shows that non-financial firms that exploit favorable global financing conditions to issue U.S. dollar bonds and build cash balances are also those whose share price is most vulnerable to local currency depreciation.

How do emerging market corporates fare during periods of currency depreciation? Federal Reserve Bank of St. Louis research shows that non-financial firms that exploit favorable global financing conditions to issue U.S. dollar bonds and build cash balances are also those whose share price is most vulnerable to local currency strength.

The relationship between extravagant increases in the monetary base and the price level is hardly straightforward or simple. What seems highly inflationary may, in the event, turn out to be deflationary when the velocity of money plunges and the U.S. dollar rallies.