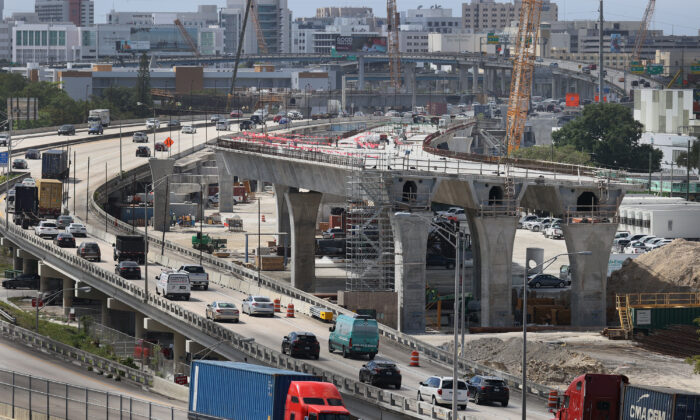 Construction workers build the “Signature Bridge,” replacing and improving a busy highway intersection at I-95 and I-395 in Miami on March 17, 2021. (Joe Raedle/Getty Images)
Politics

The much-discussed infrastructure plan slated to cost more than $3 trillion that President Joe Biden aims to pass this summer fails to deliver on traditional funding and amounts to a massive federal power grab, according to experts.

While the details are still being hashed out, including whether the plan will cost closer to $3 trillion or $4 trillion, what’s been revealed so far represents an ambitious plan covering a broad scope outside traditional infrastructure projects, such as combating climate change, “Green New Deal” programs, and income equality.

White House press secretary Jen Psaki said recently that the president has a “plan” to pay for it. Biden will unveil his plan on March 31.

“The plan represents a huge power grab for the federal government, potentially the largest in decades,” David Ditch, budget and transportation associate at the Heritage Foundation, told The Epoch Times.

“The infrastructure portion alone would mean federal involvement in projects that are at the heart of local governance, such as school construction and water systems.”

Giving so much power to the federal government would open these projects up to red tape that already causes a tremendous amount of waste and lost time on projects that include national highways and airport networks, according to Ditch. At the same time, state and local governments become more dependent on Washington for their normal responsibilities, he said.

By expanding the federal government and using the word “infrastructure” as a shield to hide a massive expansion of the welfare state, lawmakers are using the “typically bipartisan nature of the infrastructure issue as a means for left-wing policy wins,” said Ditch. He noted there’s a strong bipartisan appetite for a big spending package focused on traditional infrastructure projects such as roads and bridges.

Some lawmakers and business groups have been pushing Biden to raise fuel taxes, but in a March 29 interview on CNN, Transportation Secretary Pete Buttigieg said neither a gas tax nor a mileage tax would be part of Biden’s infrastructure plan—at least for now.

Instead, Biden is expected to propose the biggest federal tax increase in decades, two sources familiar with the plan told Reuters. It includes raising corporate income taxes back to the 28 percent rate before President Donald Trump’s Tax Cuts and Jobs Act of 2017, and increasing the marginal tax rate on high-earners, according to the unnamed sources.

The consequences of raising business taxes to partly finance the federal infrastructure push will be to reduce private infrastructure investment in market projects and state projects, replacing them “with politically selected Washington proposals,” according to Ryan Bourne, the R. Evan Scharf Chair for the Public Understanding of Economics at the Cato Institute.

“This bodes ill for growth because government projects are often not selected according to what is best for economic efficiency,” Bourne told The Epoch Times. “Instead, infrastructure programs selected by politicians can aim to confer prestige on politicians, win favor with political constituencies, or feather-nest political allies, such as trade unions.”

At the same time, political projects are also plagued with inflated costs due to environmental, “buy American,” and other regulations, said Bourne, noting that it provides “wide scope for economic and political mischief.”

Psaki confirmed early this week that Biden plans to divide the infrastructure proposal into two parts as part of a push to gain support from congressional Republicans for the different priorities. The first part focuses on rebuilding roads, bridges, and other infrastructure.

The term “infrastructure” itself is being manipulated and is currently going the same way as “investment,” becoming meaningless in political discourse, according to Bourne. He brought up how Biden even talked about the care economy, a service industry, as “critical infrastructure.”

“I suspect this wordplay reflects a Democratic belief that voters are more open to governments delivering ‘infrastructure’ than ‘subsidizing service industries.’ This part really does amount to a massive land grab in terms of the role of the federal government,” Bourne said.

Economic experts told The Epoch Times that Republicans will likely not agree to fund an infrastructure package that contains large tax hikes on business and capital. They said hopes of bipartisanship are also low. Democrat leaders including House Speaker Nancy Pelosi (D-Calif.) have called for more bipartisanship in the infrastructure plan, at least on the surface.

But this month, Sen. Ben Cardin (D-Md.,), was caught on a hot mic telling Buttigieg that Democrats will most likely have to use budget reconciliation, a strategy to circumvent Republican support, for their infrastructure plans.

Earlier in March, Senate Minority Leader Mitch McConnell rejected the notion that Republicans would back the tax increases under Biden’s plan, calling it a “Trojan horse” for Democrats to pass everything without bipartisan support.

“I don’t think there’s going to be any enthusiasm on our side for a tax increase,” he said at a weekly Senate Republican press conference.

“My suspicion is they will try to jam everything they can into that bill and call it an infrastructure bill, just like they tried to call the bill a couple of weeks ago a COVID bill,” McConnell said.

Bourne said he doubts the infrastructure package will do much in terms of pandemic recovery as infrastructure lead times are always a lot longer than expected. In the medium-term, he believes the projects will crowd out private investments by raising the demand for construction workers and raw materials. And in the longer-term, Bourne said the political selection of projects, coupled with higher taxes, will reduce the GDP from where it would otherwise have been.

“By including tax increases, plus anti-growth green and labor-union regulations, the Biden administration will lose all support of Republicans and centrist Democrats,” Chris Edwards, director of tax policy studies at the Cato Institute, told The Epoch Times.

All of this doesn’t take away the fact that America’s infrastructure is old, outdated, and in dire need of modernization upgrades. Much of the country’s critical infrastructure is based on 1950s technology, said Nicholas Giordano, a professor of political science at Suffolk Community College and former catastrophic planning lead for the New York State Office of Emergency Management.

“Both political parties have been aware of our degrading infrastructure for quite some time,” Giordano told The Epoch Times. “It is necessary that we upgrade our infrastructure in order to continue to remain competitive internally.”

Each year, the U.S. Army Corps of Engineers issues a report card, and America’s infrastructure often receives a grade of C-minus.

The biggest problem with the infrastructure package is not the price tag, but the expansion of the definition of infrastructure, said Giordano, who pointed out the country’s critical infrastructure consists of 16 vital sectors that are listed by the Cybersecurity and Infrastructure Security Agency.

“In fact, a lot of it is to satisfy the socialist wing of the Democrat Party, including a universal pre-K program, universal community college, and forced green initiatives,” Giordano said of the infrastructure plan. “Democrats have made it clear that their idea of bipartisanship is Republicans submitting and voting to support a far-left agenda.”