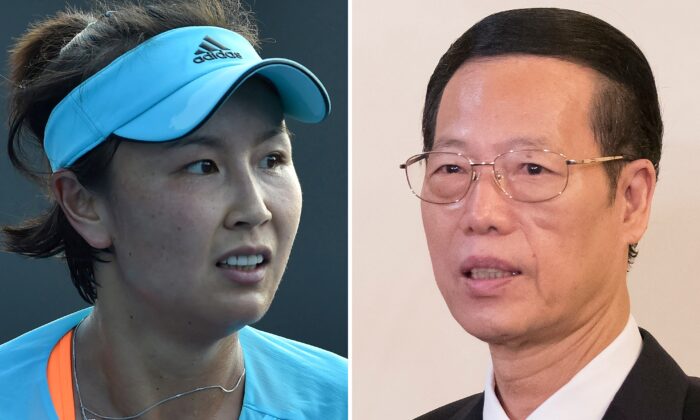 This combination of file photos shows tennis player Peng Shuai of China (L) during her women's singles first round match at the Australian Open tennis tournament in Melbourne on Jan. 16, 2017; and Chinese Vice Premier Zhang Gaoli (R) during a visit to Russia at the Saint Petersburg International Investment Forum in Saint Petersburg on June 18, 2015. (Paul Crock and Alexander Zemlianichenko/AFP via Getty Images)
Viewpoints

In Honor of Peng Shuai’s Disappearance, the Persecution of Falun Gong, Uyghurs, and So Many Others, Boycott the Beijing Olympics

As an avid lifetime player and fan, I was probably more aware of Chinese tennis star Peng Shuai than most Americans, even media types.

I was watching on television when she cramped up in the semi-finals of the 2014 U.S. Open—her greatest success thus far—and had to be wheeled off the court, throwing the match to Caroline Wozniacki.

Peng got my sympathy then, but not nearly as much as she’s had recently, since she is, as of now, a member of what is known in Spanish, because it happened so often in Argentina during the days of their military dictatorship, as the “desaparecida” (the disappeared).

Peng has vanished because, as Leta Hong Fincher explained in The New York Times:

“On Nov. 2, Peng Shuai, a former Wimbledon doubles champion, accused China’s former vice premier, Zhang Gaoli, of sexual assault. ‘Like an egg hitting a rock, or a moth to the flame, courting self-destruction, I’ll tell the truth about you,’ she wrote in a lengthy post on Weibo, China’s popular social media platform. Then she disappeared.”

The truth she was telling (we could say “alleging,” but in communist China, you don’t make casual accusations) was that Zhang sexually assaulted her. This while his wife was present in the house, no less—talk about patriarchal societies!

Zhang and Peng had had an on-again, off-again relationship, about which the tennis player felt guilty and was self-critical. She clearly wanted it over and assumed it was. The former vice premier equally clearly (and more violently) disagreed.

This is the first known #MeToo-type accusation toward a high-ranking Chinese official. Zhang was, until quite recently, a member of the Politburo.

Public discussions of her assertions and her whereabouts have been removed from the highly censored Chinese internet.

Mega tennis stars Serena Williams and Novak Djokovic have registered their concern and support for Peng, as have many in the sport.

Moreover, unlike most American sports organizations (notably the National Basketball Association), the Women’s Tennis Association under Steve Simon (no relation) has actually taken action against the totalitarian communists who rule China. The WTA is suspending play in that country until Peng surfaces in safety.

They might also wait until the CCP stops suppressing (and worse) Falun Gong practitioners, Uyghurs, and other minorities, meaning millions and millions of people in gigantic China.

Journalist Bari Weiss discusses the ramifications of these choices on her Substack: “Women’s Tennis Has Balls. Does Wall Street?”

Weiss’s target is hedge fund manager Ray Dalio, whom she accuses of looking the other way on the numerous well-known atrocities of the People’s Republic, including—but, as we say, “not limited to”—the genocide against the Uyghur Muslims and the mysterious disappearances of doctors and scientists “who tried to blow the whistle on Covid-19.”

She writes of Dalio:

“Smart guy, one imagines, to be trusted with managing $150 billion of other people’s money, as his company Bridgewater does. But when Dalio was asked yesterday on CNBC about China’s human rights record, and how he thinks about it with regard to his investments, he feigned ignorance.

“‘I can’t be an expert in those types of things,’ he told interviewer Andrew Ross Sorkin. ‘I really have no idea.’ He went on to compare China’s government to that of a strict parent, and offered some mush of moral relativism about how the United States does bad things, too. This from a man who wrote a book called ‘Principles.’”

Well, yes, but sadly quite normal in our society these days, when many in the upper reaches would rather go along with China than deal with anything so old-fashioned as morality.

Which leads us to the Olympics. How is it even faintly moral—I know, such an old-fashioned term—to participate in a festival of sport in China when one of the leading sports figures in the country has been disappeared by that government?

It’s obviously not. In a way, with the Beijing Winter Games coming in February, we’re back at the Berlin Olympics of 1936. Only this time, there’s no American hero like Jesse Owens likely to be confronting the minions of Xi Jinping.

Less likely still is that the United States will actually boycott the games. There’s a question of whether our leaders even have the leverage to do so, if they so wished (which they probably don’t).

The reason is right under our noses in a Dec. 2 New York Post editorial: “Sorry, but Hunter Biden’s profiteering matters—even if the rest of the press ignores it.”

“Most of the media,” their board writes, “continue to ignore Hunter Biden like toddlers with their fingers in their ears. His laptop is ‘unconfirmed.’ ‘Unsubstantiated.’ ‘It doesn’t matter.’”

After debunking “unconfirmed” and “unsubstantiated,” which are, indeed, ridiculous at this point—in fact were always ridiculous—the editorial boards adds:

“So that leaves ‘It doesn’t matter.’ Liberal media outlets are uniquely incurious about Hunter selling the influence of his father. In the case of the Chinese deal, outlined by [author Miranda] Devine, they say there’s ‘no indication’ that Joe Biden ever received the ‘10 percent for the big guy’ promised in one email.

“But consider these questions:

“We know from Hunter’s own correspondence that the chairman of China’s government-connected energy firm CEFC promised him $10 million a year for three years to provide ‘introductions.’ What politicians did he introduce executives to? Which of those meetings did Joe Biden help facilitate? What promises were made at those meetings?”

I’ll leave it there. There’s obviously more at the Post link, including emails indicating that Hunter actually paid Joe’s bills with credit cards the two shared and that one of those same cards was used to pay a prostitute, presumably in China.

Unlike the discredited Steele dossier, this comes from actual evidence, on a hard drive that belonged to Hunter.

So, will the United States under Joe Biden be boycotting the Beijing Olympics? You’ve got to be kidding. I wouldn’t be surprised if the family had a piece of it.

Nevertheless, We the People can boycott the Beijing Games ourselves. We can decide not to watch yet another slavish display of communist propaganda on our television screens, and create our own ratings disaster for NBC. They deserve it and then some.

So find something else to do during the Olympics. Write your congressman—there’s plenty to write about—or brush up on your Shakespeare before he’s banned from the schools.

As for Peng Shuai—pray for her. And while you’re at it, pray for the Uyghurs, the Falun Gong, and just about everybody else in the People’s Republic of China who cares even a little bit about human freedom.