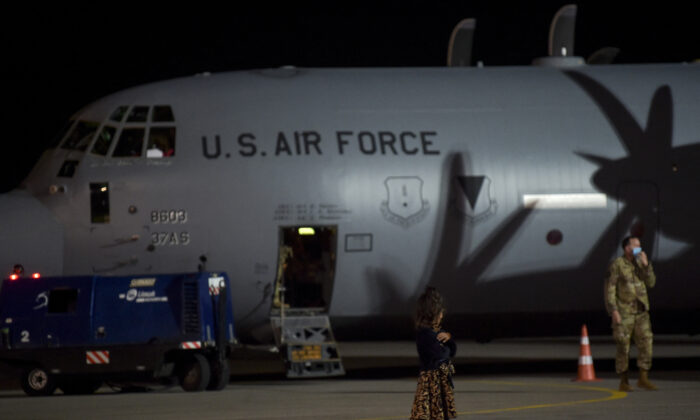 An Afghan refugee girl, fleeing the Afghan capital Kabul, stands on the tarmac after disembarking from an US air force plane upon their arrival at Pristina International airport near Pristina on Aug. 29, 2021. (Armend Nimani/AFP via Getty Images)
US News

The Pentagon has admitted that “hundreds” of Americans seeking evacuation have been left in Afghanistan, after the last U.S. military plane departed Afghanistan’s Hamid Karzai International Airport a few hours before dawn.

In announcing that the United States has officially ended its military presence in Afghanistan, hours before President Joe Biden’s Aug. 31 deadline, U.S. Central Command (CENTCOM) head Gen. Frank McKenzie said that there are still Americans who remain in Afghanistan “in the low hundreds.”

He made the remarks during a televised address in response to a reporter’s question, adding that the military and State Department will work to evacuate those individuals.

The head of U.S. Central Command added that he believed if U.S. troops remained in Afghanistan for a further 10 days, “we wouldn’t have gotten everybody out … and there still would’ve been people who would’ve been disappointed.”

“That’s what we’re doing now, that’s the path we’re on. And I think we’ll get there,” Biden said at the time. “If there’s American citizens left, we’re gonna stay to get them all out.”

A Pentagon spokesman earlier on Aug. 30 said that around 600 Americans still remain in the country.

The U.S. pullout from Afghanistan ended with a rushed evacuation that extracted more than 100,000 people beginning Aug. 14 as the Taliban took over Kabul following a sweeping advance to the capital over only a few days.

On Aug. 26, a bombing at Kabul’s airport claimed the lives of an estimated 170 Afghan civilians, 13 U.S. troops, and three Britons. ISIS-K, an ISIS affiliate, claimed responsibility for the Aug. 26 attack, bragging about a suicide bomber “managing to penetrate all the security fortifications” put into place by U.S. forces and the Taliban.

Zabihullah Mujahid, a spokesman for the Taliban, said that it was conducting a “Taliban investigation” into the attacks. Meanwhile, Afghan resistance leader Amrullah Saleh, who says he is Afghanistan’s acting president according to its constitution, has claimed that the Taliban, which has many factions in Afghanistan, were behind the blasts.

Secretary of State Antony Blinken said on Monday that the United States will continue to try to evacuate the remaining Americans by either working with Afghanistan’s neighbors to secure their departure either overland or by charter flight once Kabul’s Hamid Karzai International Airport reopens.

“The protection and welfare of Americans abroad remains the State Department’s most vital and enduring mission,” said Blinken. “If an American in Afghanistan tells us that they want to stay for now and then in a week or a month or a year, they reach out and say, I’ve changed my mind, we will help them leave.”

The Taliban terrorist group has claimed that normal travel will be allowed after it assumed control of the airpot following the U.S. troop withdrawal.