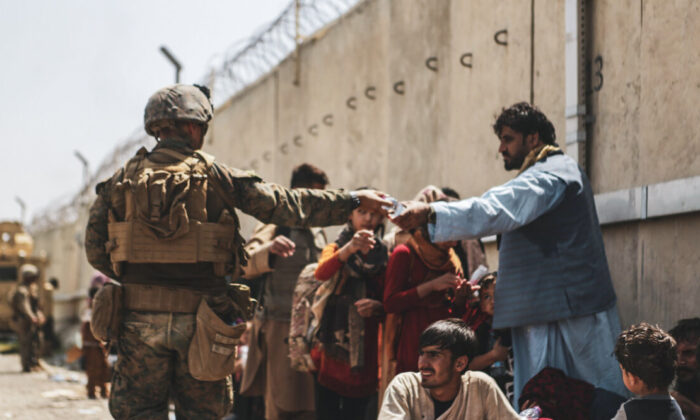 How Not to Win Hearts and Minds

America’s failure in Afghanistan isn’t limited to a botched withdrawal. It also involves a war that was botched over 20 years. Remember that at the time of 9/11 the Taliban ruled Afghanistan. Shortly thereafter, the U.S. military expelled them from power. Now they’re back in Kabul, and they have renamed their country the “Islamic Emirate of Afghanistan.” America’s war on terror has clearly failed.

The consequences of failure are already apparent. While thousands of Americans—perhaps upward of 10,000—remain stranded in Afghanistan, the U.S. government makes pleas to its Taliban foes to help us out. Secretary of State Antony Blinken issues vacuous statements, “calling upon” the Taliban to “guarantee the protection of women and girls” and vowing that the United States will “monitor closely” how they’re doing. President Joe Biden says the Taliban is going through an “existential crisis” over its future role in the international community when it’s obvious that America, and his own administration, are the ones facing the crisis.

How then did we get to this tragic point where America’s role as the world’s leading nation is in jeopardy, America’s allies are condemning her, and our enemies are laughing at us? The answer can be found in an early objective of the Afghan war: winning the hearts and minds of the Afghan people.

Wars do not typically have such an objective. The Romans never bothered about winning the hearts and minds of the peoples they captured. The Roman strategy was simple: beat them into submission, take over their government, and then rule them with an iron hand, granting foreign peoples who are especially supportive of Roman rule the opportunity over time to become Roman citizens.

Shortly after the expulsion of the Taliban—the easy phase of the war—Secretary of State Colin Powell declared that America must now assume responsibility for the future of Afghanistan. Invoking the motto of retail stores that carry breakable merchandise, Powell insisted that “if we break it, we own it.” To reinforce his point, National Security Adviser Condoleezza Rice said the United States didn’t want to play whack-a-mole in Afghanistan, meaning U.S. troops didn’t want to keep coming back to swat down the Taliban—the country would have to be remade once and for all.

But how do you remake a country? The goal from the start—carried through eight years of Bush and eight years of Obama—was to try and win over the Afghan people. Toward this end, the United States made a supreme effort to introduce democratic elections in Afghanistan, to start schools for Afghan girls, to foster economic development in the country, to train an indigenous Afghan army, and so on. The whole project collapsed in days when the army ran away and the Taliban seized the country.

Changing hearts and minds is no easy job, as history and experience both tell us. I grew up in India, and my wife has visited a few times. I asked her to imagine a scene she’s very familiar with, an Indian train station with hordes of people pouring out on a given day. Now, I said to her, look at those people, maybe two thousand of them, perhaps as many as five thousand. Try to change their hearts and minds—how would you do it?

She laughed. There’s virtually no way to do it. The most obvious way I can think of is to show them a way of life that they could never even imagine for themselves—say a life for their family in a nice leafy suburb of America—where they can see a better future for their children. Once they have seen it, and seen a way to have it for themselves, they’re likely to say to themselves, “I want that.”

But notice here that you haven’t really changed their hearts and minds; they have. They are the ones in pursuit of the American dream, or the American way of life. But if Americans go to other countries, even developed countries such as France or Brazil, and try to change hearts and minds, they are not likely to succeed very easily. And if you can’t succeed there, what makes you think you can in a tribal Third World region like Afghanistan?

The British ruled India for a long time, and even they didn’t try to change hearts and minds for the most part. India had a system of local village headmen resolving disputes—the so-called panchayat system. The British left that in place. India was ruled by a mélange of Hindu and Muslim rulers who presided over their own kingdoms. Britain merely made those rulers subordinate to British authority.

Slowly, over time, an English-speaking class developed among the Indians, and remarkably, when the British left, the Indian independence leaders continued many of the customs and practices they inherited from the British. English became the primary business language of India. The Indians retained the British system of parliamentary democracy and also the British court system.

Once again, however, notice that it was the Indians who voted to retain these British institutions. True, the British had changed Indian hearts and minds, but this was over many generations, and it involved the British not merely trying to rule India from afar, but sending Englishmen and their families to settle and live in India for two centuries.

Consider, moreover, that in Afghanistan we are dealing with Muslims who are deeply committed to the Muslim way of life, including Islamic holy law or sharia. In a secular age when many religions have lost ground even among their own adherents, Islam today retains the force of its original seventh-century revelation. When a Taliban leader was asked about women’s role in the new Afghanistan, he said his regime would protect women’s rights “within the limits of Islam.”

Everything will be done within the limits of Islam, and I’m guessing this is how most Afghans want it. Thus, we have the remarkable prospect of a divided America, which has never been less sure of itself and its role in the world, attempting to convince an Islamically unified society to adopt American notions of democracy, women’s rights, gay rights, and human rights. A recipe for failure!