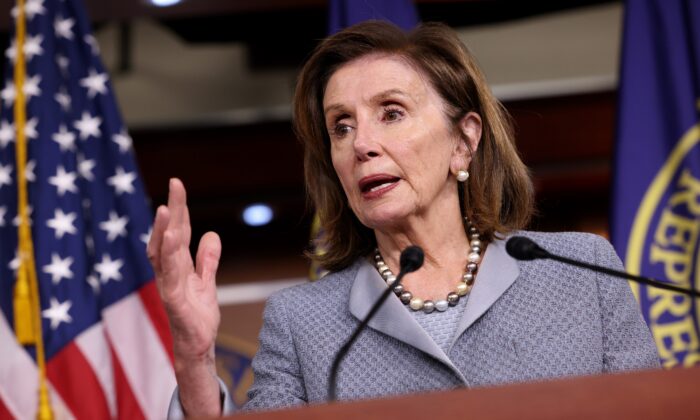 Speaker of the House Nancy Pelosi (D-CA) speaks at a news conference on the Protecting Our Democracy Act, at the U.S. Capitol on Sept. 21, 2021 in Washington, DC. (Kevin Dietsch/Getty Images)
Congress

The House of Representatives voted late Tuesday to pass a bill that would avert a government shutdown and fund it through Dec. 3, as well as suspend the debt limit until after the 2022 election.

The 220–211 vote in the Democrat-majority chamber was on party lines. The bill now faces a tough hurdle in the Senate, where Republicans have said they would mount a filibuster.

Congress must pass a funding plan by Sept. 30 to avert a government shutdown or U.S. default. The bill would, if passed, keep the government open through Dec. 3 and suspend the debt limit through Dec. 16, 2022.

The extra time will allow lawmakers to negotiate on the budget for the coming year.

While the measure’s highest priority is to prevent a shutdown, it will also provide billions in new spending for disaster relief and to assist Afghanistan evacuees.

House Speaker Nancy Pelosi (D-Calif.) and Senate Majority Leader Chuck Schumer (D-N.Y.) on Monday announced in a joint statement that they would combine both short-term government funding measures and the suspension of the U.S. debt limit in one bill.

Senate Minority Leader Mitch McConnell (R-Ky.) has vowed to block an increase in the $28.4 trillion debt ceiling and said that Democrats, the majority party, must raise the debt ceiling themselves.

On Tuesday, McConnell said: “I want to repeat once again: America must never default. We never have and we never will.”

He also reiterated that it is the majority party’s responsibility to raise the debt ceiling. That would have the effect of letting Republicans avoid voting for a debt limit increase ahead of next year’s congressional elections.

Republicans have said Democrats could raise the debt limit on their own through reconciliation, a special parliamentary procedure that would expedite the passage of a budgetary measure through the Senate, bypassing the chamber’s rule that 60 out of its 100 members must approve legislation. But Democrats have resisted doing that so far, saying the vote to raise the debt limit should be a bipartisan one.

“Playing games with the debt ceiling is playing with fire and putting it on the back of the American people,” Schumer said in a speech.

Republicans have expressed that they would support a bill to avert a shutdown only if the debt limit extension was omitted.