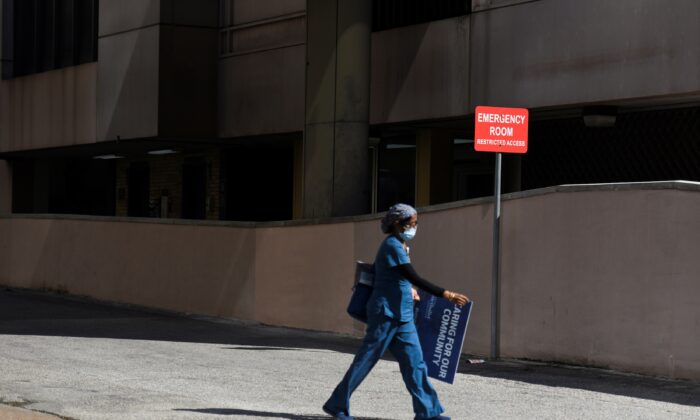 A hospital system in Texas has suspended workers who didn’t get a COVID-19 vaccine.

The Houston Methodist hospital system on April 1 informed employees that they would be required to get a vaccine on or before June 7 or submit documentation for an exemption.

Exemptions would be based only on a medical condition such as pregnancy deferment or sincerely held religious beliefs.

As of June 8, 24,947 workers had chosen to become fully vaccinated against the CCP virus, according to Marc Boom, CEO of the system.

He told employees in an internal memo obtained by The Epoch Times that 178 workers either didn’t get fully vaccinated or didn’t get vaccinated at all.

“The small percentage of employees who did not comply with the policy are now suspended without pay for the next 14 days,” he wrote, adding that those workers “have decided not to put their patients first.”

According to the April 1 memo that was sent to employees in the hospital system, the suspended workers would be fired if they weren’t fully vaccinated by the end of the suspension period.

Another 285 employees received a medical or religious exemption, while 332 were granted deferrals for pregnancy or other reasons.

In the June 8 memo, Boom told the workers who have been vaccinated that he was proud of them.

“You did the right thing. You protected our patients, your colleagues, your families, and our community. The science proves that the vaccines are not only safe, but necessary if we are going to turn the corner against COVID-19,” he wrote.

To those “sad about losing a colleague who’s decided not to get vaccinated,” he said, “we only wish them well and thank them for their past service to our community, and we must respect the decision they made.”

“Since I announced this mandate in April, Houston Methodist has been challenged by the media, some outspoken employees and even sued. As the first hospital system to mandate COVID-19 vaccines we were prepared for this. The criticism is sometimes the price we pay for leading medicine. As of today, several other major health care centers have followed our lead and have announced their own vaccine mandates, with many more to follow soon,” Boom continued in his memo.

The system has received strong pushback for its mandate. Over 100 employees last month joined together to file a lawsuit, arguing that the system was “forcing its employees to be human ‘guinea pigs’ as a condition for continued employment.”

The plaintiffs noted that the three COVID-19 vaccines currently being administered in the United States have received emergency use authorization (EUA), but none have been approved by U.S. drug regulators.

Plaintiffs asked the District Court in Montgomery County to block the system from terminating plaintiffs if they refuse to get a vaccine and to declare the mandate invalid.

The system in response said that it’s legal for health care institutions to mandate vaccines, noting that it has mandated flu vaccines since 2009.

The suspensions were able to happen after U.S. District Judge Lynn Hughes, a Reagan appointee, denied a request for a temporary restraining order after the case was moved to district court from Montgomery County court. The hospital system later filed a motion to dismiss. A hearing on that motion is set for June 11.

A federal agency said recently that businesses can require employees to get a vaccine without violating federal laws but that employers must provide “reasonable accommodations” for workers who can’t or won’t get vaccinated due to religious reasons, pregnancy, or a disability.

Mathew Staver, chairman of Liberty Counsel, a Christian group that represents a variety of clients, has a different view. He told The Epoch Times that a business requiring vaccines is “clearly illegal.”

“Federal law specifically says that no one can be coerced or forced to get one of these EUA-authorized drugs, which means that it’s under an EUA because we don’t have enough data regarding safety,” he said. “We’re seeing a lot of alarming information with regards to deaths and adverse injuries as a result of one of these COVID shots, so it is completely illegal, in my view, under the federal law and under employment law, and in this case, under the law in the state where this hospital is in, Texas, to force the employees to get this shot.”

Requiring the vaccine opens up employers to liability if an employee gets a shot and suffers an adverse reaction or death, he said.

Federal officials say only a small percentage of those who have received a vaccination in the United States have suffered an adverse reaction, with some ultimately dying, and that there is no evidence at this time linking the adverse reactions to the vaccines.

Earlier this week, one of the nurses suing Houston Methodist led a walkout as she completed her shift.

Supporters met the group and cheered them.

“We’re all suspended right now,” nurse Jennifer Bridges told KTRK. “We’re supposed to meet with a federal judge this week so he can choose to let us go back to work.”

Editor’s Note: This article has been updated with comments from Liberty Counsel’s Mathew Staver and updated information about the court case.