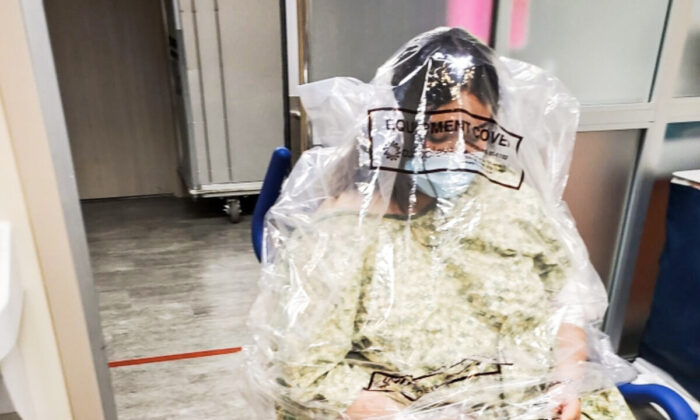 Nayeli Serna was placed under a clear plastic equipment bag in the emergency room of Medical Center Hospital in Odessa, Texas, on Aug. 28, 2021. (The Accountability Project of Odessa)
US News

The mother of a 16-year-old Texas girl, who is shown in photographs wearing a plastic bag in a local hospital after testing positive for COVID-19, is asking the state to intervene over the unorthodox medical “protocol.”

Natalie Rodriguez broke into tears in a telephone interview with The Epoch Times as she described her daughter Nayeli Serna’s experience at Medical Center Hospital in Odessa, Texas.

On Aug. 28, Rodriguez said she took Nayeli to her primary care doctor after her daughter began to experience of shortness of breath. Nayeli’s oxygen level was around 87 percent—well below normal, Rodriguez said.

She said the doctor referred Nayeli to the emergency room at Medical Center Hospital for further evaluation. The teen later tested positive for the Chinese Communist Party virus that causes COVID-19.

“As they transported my daughter for tests, they placed a clear plastic equipment bag tightly fitting over her head, removed supplemental oxygen, and instructed her to wear a face mask under the bag,” Rodriguez said in an Oct. 13 written complaint to the Texas Department of State Health Services.

“I cried,” Rodriguez told The Epoch Times. “I asked (a nurse) if they had to put it over her,” and she was told it was hospital “protocol.”

“It was a good while, but they didn’t turn the oxygen on. They forgot to turn it on,” Rodriguez added.

Rodriguez said Nayeli sat in a wheelchair in the ER with the bag over her head for 20 to 25 minutes.

At that point, her daughter had shut down emotionally. She was later taken into the hospital’s ICU for treatment. She recovered about two weeks later, Rodriguez said.

However, the straight-A student is now dealing with symptoms of post-traumatic stress disorder, her mother said.

“She just has a lot of anxiety now. She can’t really tolerate people,” Rodriguez said.

Foreman agreed to post the photo of Nayeli draped in the plastic bag on the group’s Facebook page. It has been shared more than 1,000 times.

“I was appalled. I didn’t put that picture out there for weeks. We didn’t know if she (Nayeli) was going to live or die,” Foreman told The Epoch Times.

Foreman said she is aware of at least two other hospital patients who were made to wear the plastic bag as a safety precaution, including an 80-year-old woman prior to her transportation to a nursing home.

Foreman said the hospital even threatened to report an ambulance paramedic who refused to follow the protocol.

The accountability project shared with The Epoch Times hospital instructions for patients using the “transportation drape,” which is clearly marked “equipment cover” in Nayeli’s photo.

The one-page document states that patients “must be on oxygen and [the] time limit under this apparatus is maximum of 10 minutes.”

Rodriguez said that watching her daughter during bed transport reminded her of “dry cleaning.”

She added: “My daughter was instructed to keep the clear plastic bag handy as she would need to wear it every time she was transported.

“Indeed, she was moved multiple times without supplemental oxygen, with the plastic equipment bag over her head and torso, and a face mask on her nose and mouth under the equipment bag.”

Medical Center Hospital did not respond to a request for comment.

Christine Mann, chief press officer for the Texas Health and Human Services Commission, said the agency does not comment on hospital complaint information, or active investigations, saying they are “confidential by law.”

“We were pleased to have the mother reach out to us to address the situation,” Tippin said in a press release.

“Our top priority will always be the safety and care of our patients. We are always willing to listen to our patient’s experiences to better communicate with them to make sure they are comfortable.”

Tippin added that with any medical procedure the patient or guardian “has the right to refuse the form of protection.”

Since Nayeli’s photo went public, Tippin said the hospital and staff have received “numerous threatening phone calls, including threats on their lives, their family’s lives and even threats of bombing the hospital.”

Hospital district police and the FBI have been contacted, he said.