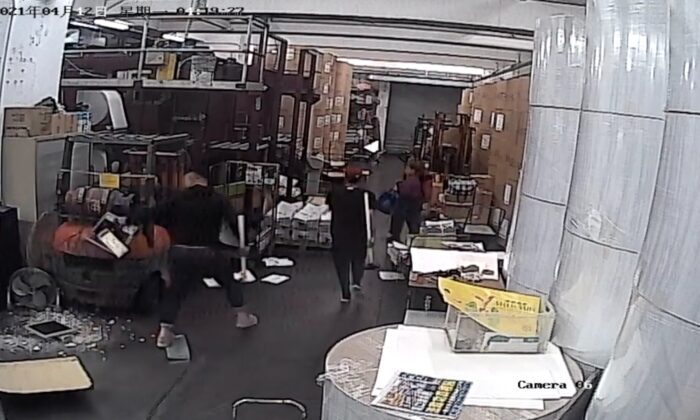 Two intruders dressed in black holding hammers caught on CCTV at the print shop that prints the Hong Kong edition of The Epoch Times on April 12, 2021. (The Epoch Times)
HK Current Affairs

The Hong Kong edition of The Epoch Times is temporarily suspending distribution to repair damaged equipment after an attack on April 12—the fifth attack on the printing plant since it was established in 2006.

In the early hours of April 12 local time, four masked intruders barged their way into the warehouse, wielding two sledgehammers and a knife hidden inside a plastic bag.

The four men smashed printing press equipment and tossed construction debris on the equipment before fleeing in a white van. Among the items damaged were multiple computers and the printing press’s central control panel. The men warned a print shop employee to “go away,” with one saying, “Don’t force me to do anything.” They also stole a computer as they left.

The Hong Kong edition of The Epoch Times has decried the attack as a crime against Hong Kong’s liberties and the rule of law.

“These thugs are not just targeting The Epoch Times Hong Kong, but also the independent media outlets in Hong Kong,” the outlet said in a statement. “It’s a malicious attack on basic societal norms such as … press freedom.”

“The Chinese Communist Party cannot continue to intimidate and infringe on freedom of the press in Hong Kong,” she told The Epoch Times. “If it is true that the CCP was behind these attacks, they must be held accountable.”

PEN America, a New York-based nonprofit that advocates for press freedom, said the armed attack represents “an alarming escalation of the threats to press freedom in the territory.”

“Coming amidst arrests, prosecutions, and convictions of critics of the Chinese government, these lawless attacks seem to fit the paradigm of an all-out effort to suppress dissent,” the group said in a statement to The Epoch Times.

The Hong Kong printing plant has suffered a slew of attacks over the past 15 years, and previous police investigations have yielded few results.

In November 2019, masked assailants, including two wielding expandable batons, carried buckets of flammable liquid into the printing warehouse. They proceeded to pour the liquid onto the printing machines and paper rolls and lit them on fire.

The damage from the arson was estimated at more than $40,000.

In May 2013, three men dressed in black attempted to break into the factory without success. Some parts of the metal door were bent from the effort.

In October 2012, vandals damaged the lock on the printing shop’s door with an electric drill.

And in February 2006—two weeks after the printing site was established—four men broke into the building and damaged the newly purchased equipment, which cost more than HK$1 million ($128,660).

“While the perpetrators have not been identified, patterns of attacks on independent media have in the past met with indifference from law enforcement, suggesting that they may be condoned or even ordered by authorities,” PEN America said. “If Hong Kong hopes to hold on to its reputation as an outpost for openness and the rule of law, it must bring these criminals to justice and respect the role and rights of a free press.”

“We must show these media that are dedicated to speaking the truth that Hongkongers are 100 percent standing behind you,” he said.