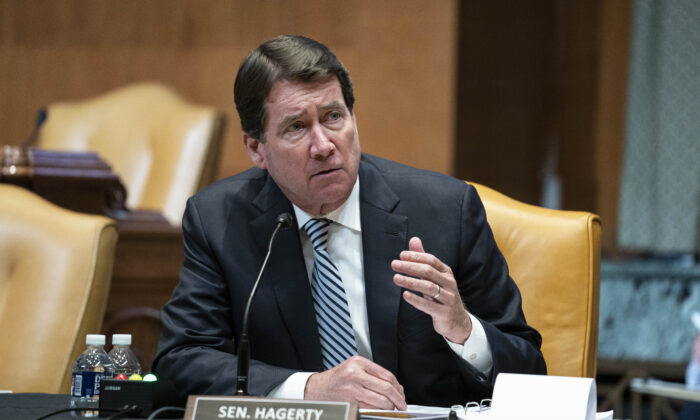 An article in the Washington Times this morning—“GOP Sen. Hagerty blocks Democrats from expediting $1.2T infrastructure bill in late-night session”—made this bald guy’s hair stand on end this morning.

“Sen. Bill Hagerty blocked Democrats from ramming through President Biden’s $1.2 trillion infrastructure bill late Thursday, only hours after the package was found to be not fully paid for as promised.

“Mr. Hagerty, a first-term Republican from Tennessee, refused to sign off on a deal between Democratic and GOP lawmakers to expedite passage of the legislation. Senate Majority Leader Charles E. Schumer had worked out an agreement with Republicans to pass a series of amendments to the infrastructure package en masse.

“If successful, the tactic would have all but ended debate on the bill, setting up a final vote for Saturday. To succeed, however, all 100 members of the Senate had to acquiesce, something Mr. Hagerty refused.”

It appears Hagerty had a good reason. A report had just come in from the Congressional Budget Office detailing that the bill, which had been ballyhooed as revenue neutral (i.e., “No new taxes,” as the saying goes), was coming in all of a quarter of trillion dollars short.

Who pays for that? Well, we know. And then there’s the little matter of the astronomical national debt no one’s supposed to care about.

But where were the rest of the supposedly fiscally-responsible Republicans?

Arguing with Hagerty to get him to change his mind, according to Examiner reporter Haris Alic, so they could go off on vacation. It’s the dog days of August, so the beaches were calling, and, besides, Schumer & Co. were going to get their way in the end anyway. The rancid Green New Deal was next.

Yet, Hagerty held his ground. And, to be clear, the freshman senator is no naive freshman, wet behind the ears. He was the ambassador to Japan, not exactly a lightweight job.

This kind of report, assuming it’s accurate, and unfortunately it reads true, makes you wonder about many of your favorite senators talk a good game on television but when the rubber meets the road (hate that expression, but it’s still early in the morning) don’t come through.

I’ll be a nice guy and not name names, but readers can fill in their own. Almost any will do.

When we do see a politician acting, not just talking, with integrity, we’re pleased, but shocked at the same time. We’re not used to it. (This accounts for a lot of the popularity of Gov. Ron DeSantis.)

This all talk and little or no action, maybe some pro-forma flag-waving, approach is the familiar way in politics, both nationally and on a state level and has made many of us cynical about the process.

But it also speaks to our own lack of engagement with that process. If we were all paying more attention, and making our views known—respectfully, but firmly and constantly—more people would be acting like Hagerty.