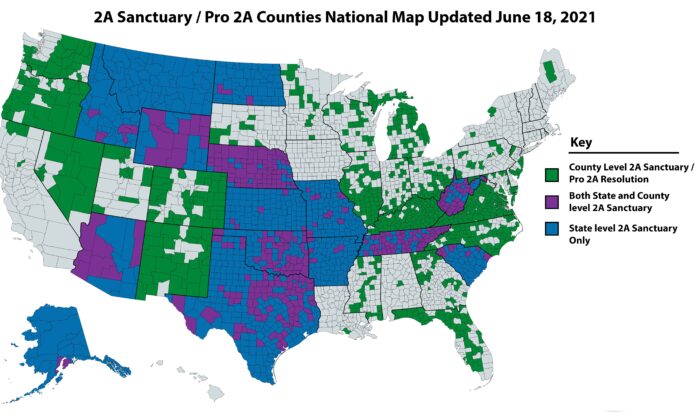 An analysis has revealed that more than three-fifths of all U.S. counties are so-called “Second Amendment sanctuaries” after a number of states this year passed legislation declaring them as such.

The website, Sanctuary Counties, found on June 20 that there are now 1,930 counties that are “protected by Second Amendment Sanctuary legislation at either the state or county level,” representing 61 percent of all counties.

It noted that a number of states have passed “Constitutional Carry” laws, while specifically, approximately 1,137 counties “have taken it upon themselves to pass Second Amendment Sanctuary legislation and likely hundreds of cities, townships, boroughs, etc have done so at their level as well.”

“We have seen plenty of news about Constitutional Carry, which is another movement that we are actually quite supportive of,” the site wrote. “Yet the mainstream news has remained relatively silent regarding the massive Second Amendment Sanctuary movement, which leads us to a few questions.”

In an attempt to clarify the difference between the two, Sanctuary Counties noted that the “Second Amendment Sanctuary movement” is from the bottom-up and a grassroots movement.

In a statement to The Epoch Times on Friday, a spokesperson for the Sanctuary Counties movement said that a “Second Amendment Sanctuary … refers to a state / county / city or other municipality expressing their support for the Second Amendment and … many cases vowing not to enforce new / unconstitutional gun laws.”

Constitutional carry generally, meanwhile, refers “to the ability of a state’s citizens to carry a weapon without a permit,” added the spokesperson, noting that in Texas, both constitutional carry and Second Amendment sanctuary bills were passed and signed.

It comes as after every sheriff in the state of Utah in mid-June signed a letter stating they would attempt to safeguard the Second Amendment.

“Importantly, the Second Amendment of our divinely inspired Constitution clearly states … ‘the right of the people to keep and bear Arms shall not be infringed,’” said the statement (pdf), which was signed by all 29 sheriffs in the state, and was released via Cache County Sheriff Chad Jensen’s office on June 15. “We hereby recognize a significant principle underlying the Second Amendment: the right to keep and bear arms is indispensable to the existence of a free people.”

Meanwhile, a number of Republican state lawmakers passed or proposed similar legislation. On Wednesday, the Wisconsin state Legislature sent a bill to Democrat Gov. Tony Evers that would prevent federal gun laws from being enforced in the state, which is sure to be vetoed by the governor.

In another example, Nebraska Gov. Pete Ricketts in April signed a proclamation that designates his state as a Second Amendment sanctuary state.

Democrats and gun-control organizations have typically opposed such legislation, saying they would increase the number of mass shootings and provide easier access to firearms for individuals who shouldn’t be able to own them.

After Missouri Gov. Mike Parson signed a bill that would nullify federal gun laws in the state, Moms Demand Action spokeswoman Tara Bennett said the measure “will interfere with the enforcement of the critical protections that help keep Missourians safe from gun violence.”

And in recent days, the federal government has increasingly pushed for more gun-control legislation amid a spike in crime around the United States, which has been linked to the defunding of police departments over the past year across the country.

President Joe Biden this week announced a plan to target firearms dealers who flout the law, calling them “merchants of death.” In recent days, the president and the Department of Justice have attempted to tie the sharp increase in shootings and homicides across major U.S. metropolitan areas with a lack of enforcement of gun laws.

“We’ll find you and we will seek your license to sell guns,” Biden said in the State Dining Room of the White House on June 23.

Attorney General Merrick Garland, who spoke before Biden, said that the majority of licensed firearms dealers sell to individuals who passed their background check.

“But those dealers that willfully violate the law increase the risk that guns will fall into the wrong hands,” he said, characterizing part of the administration’s plan as a “concerted effort to crack down on gun traffickers.”