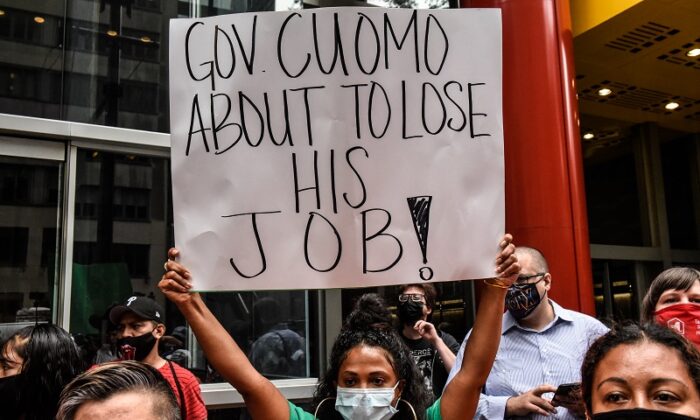 The media feeding frenzy over sexual harassment allegations against Gov. Andrew Cuomo of New York has transported me 23 years back in time to 1998 and the unprecedented—if very brief and highly precarious alliance between the media and Republicans in Congress—to blacken the reputation of President Bill Clinton over his affair with Monica Lewinsky.

Then, as now, I’ve had very mixed feelings about the whole thing.

For many years, I have written—mainly in The New Criterion and in my book “Media Madness” (Encounter, 2008)—against the media’s scandal culture, which was begotten by the Watergate scandal of a half-century ago.

That was when the media first chose to exercise their power, in collaboration with disaffected bureaucrats privy to government secrets, to affect political change by lending their mighty publicity engine to the discovery (or, under Donald Trump, the fabrication) of evidence of wrongdoing by the politically disfavored.

Until President Donald Trump came along, no one was more politically disfavored in the media than President Richard Nixon.

I haven’t space here to go into all the reasons for the media’s hatred of this poor boy who made good and who might otherwise have been seen as a great man, but it began with his service on the House Un-American Activities Committee in the late 1940s, helping to root out communists and those who were then called their “fellow travelers” in government.

And the hatred only grew hotter and more virulent in the 20 years before he was elected to the presidency in the politically chaotic year of 1968.

The point is that, during Watergate, many in the media didn’t even pretend that their allegations of wrongdoing weren’t motivated by their hatred, rather than the other way around.

Of course, we saw the same thing during the endless scandal-mongering of Trump’s presidency—which continues even now that he’s out of office. The media’s promotion of scandal—which is now practically their only job when they aren’t promoting their own ideological confreres—has so often had a purely political motive that they don’t even bother to hide it anymore.

Similarly, no one in Congress, on either side of the political aisle, seems to have the slightest hesitation in jumping into the role of judge in his own political cause.

But this devotion to the task of attacking one’s political enemies on moral grounds that might seem to have little or nothing to do with their performance in office creates an interesting situation when the morals in question are those of political friends—in other words, Democrats—such as Bill Clinton or Andrew Cuomo, whom the media, especially, instinctively try to protect.

In most such cases, the media’s protection of their favorites is a simple matter of insisting that the charges of wrongdoing against them are politically motivated—the work of “right-wing hatchet men” or a “vast right-wing conspiracy”—which is richly ironic in view of the undisguised political motivations behind their own cries of scandal against Republican targets.

The crowning achievement of such deflective tactics came during last year’s election campaign, when the media quickly rounded up 50 current or former “intelligence officials” to sign onto a statement claiming that the Hunter Biden laptop story in the right-wing New York Post sounded to them like “Russian disinformation.”

But when, as in the Clinton and Cuomo cases, the allegations are of sexual misbehavior against a white male Democrat—a black male Democrat such as Lt. Gov. Justin Fairfax of Virginia, still in office in spite of allegations of rape against him, may be a different matter—this approach runs the risk of offending the important Democratic constituency of educated women, who are often ideologically committed to the view that women never lie about such things.

The $64,000 question for the media is this: Are these female Democrats equally committed to the view that charges of sexual misconduct are equally serious no matter which party the alleged offender belongs to?

There were few protests on the left—almost none that I am aware of—when the media successfully buried the story of Tara Reade’s allegations of sexual assault against Joe Biden last year. But Reade was an isolated case and could be portrayed, as at first, Lewinsky was, as a bitter and perhaps mentally unbalanced woman with a grudge.

Besides, Biden was by that time the presumptive Democrat standard-bearer against the hated man in the White House and had to be protected at all costs.

But with Cuomo, as with Clinton before him, there must have come a tipping point where the media collectively decided that such credibility with the public as they still retained would be lost unless they abandoned their initial attempts to ignore or kill the story and turned the big guns of their moral outrage, at least temporarily, against their former favorites.

Pardon my cynicism, but I can see no other explanation for such outrage as we are currently seeing directed against Cuomo, a man whom it is even more difficult to feel sorry for than it was for Clinton.

All the same, I do feel a bit sorry for him, since the obloquy he has had and presumably still has to endure really has little or nothing to do with the ostensible charges against him—which also serve to mask the much more serious wrongdoing he was guilty of in sending so many old people to nursing homes to die of the coronavirus and then attempting to cover it up.

That other Democratic governors were guilty of the same thing may be another reason why his former friends in the media now find him expendable, and someone to be made an example of on quite other grounds.

The one consolation I feel in my perplexity lies in the contemplation of the embarrassment the media would feel, if they were capable of embarrassment, of the fawning treatment of the governor only last year, when he looked like the perfect Democratic foil to the hated Trump, and celebrities such as Ellen DeGeneres rushed to proclaim themselves “Cuomosexuals.”

In retrospect, that now-embarrassing moment looks a bit like the Time magazine reporter Nina Burleigh telling The Washington Post during the Clinton–Lewinsky scandal that “I’d be happy to give him [oral sex] just to thank him for keeping abortion legal.”