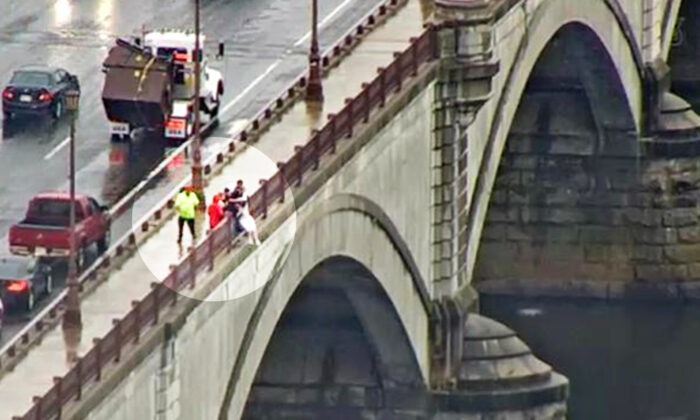 Seeing a distressed woman who had climbed over a railing of a bridge in West Springfield, Massachusetts, a number of good Samaritans stopped their cars and rushed to her aid, pulling her to safety and possibly saving her life.

The civilians have since been recognized by Police Commissioner Cheryl Clapprood, and Springfield Mayor Domenic J. Sarno, for their quick thinking and selfless actions on Sept. 24.

Their help came in the nick of time. According to footage of the troubling scene captured by the Springfield Police Department’s Real-Time Analysis Center cameras, which was also shared on YouTube, the woman had climbed over the railing of the city’s Memorial Bridge and looked ready to jump before first responders could arrive.

Noticing the woman, several compassionate drivers clocked the emergency and pulled over. They teamed up to lift the woman over the railing to the safety of the sidewalk by her arms and legs. Police officers and Behavioral Health Network (BHN) clinicians soon arrived to take over, transporting the woman to an area hospital for evaluation. Co-responders and clinicians at the hospital further worked with the woman to provide her with the care and assistance that she needed.

Clapprood commended the civilians for their “incredible job working together to pull the distressed woman back to safety.”

“I want to thank them for their selfless actions today,” she expressed.

Sarno added his own statement of gratitude, hailing the civilians’ “quick and selfless actions” that kept the woman safe until health care professionals could arrive.

“Mental health is a serious concern,” he said, adding, “I want to applaud Commissioner Cheryl Clapprood, and the brave and dedicated men and women in blue, for their continued and unyielding efforts working with our BHN partners in addressing mental health calls.”

In November 2019, Springfield Police Department inaugurated its Crisis Intercept program in conjunction with mental health partners at BHN, so named for its inclusion of a certified clinician alongside the traditional response of sending the closest police cruiser to any emergency call.

Crisis Intercept, said Sarno, has so far been “extremely successful in responding to crisis calls and getting individuals the help and assistance they need.”

The program has already grown to include six dedicated BHN co-responders. Police claim that when responding to mental health calls, the person in crisis would often rather speak to a clinician than an officer or ambulance personnel.

The current mental health crisis, said Clapprood, is why she is “such an advocate” for the city’s successful, expanding program.