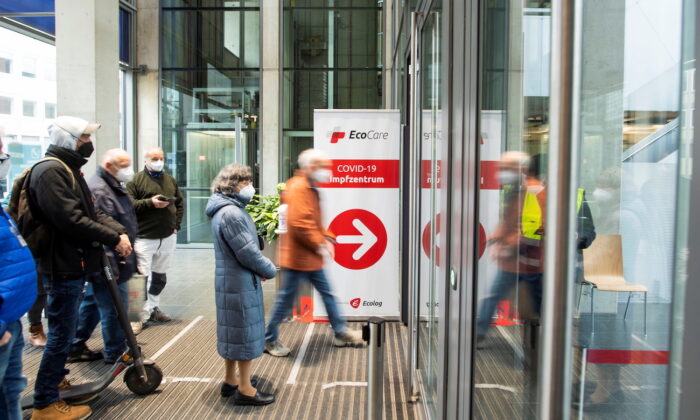 People wait to be vaccinated at the vaccination centre in Nuremberg, Germany, on Nov. 18, 2021. (Lukas Barth/Reuters)
WORLD

Germany and Greece officials have rolled out new restrictions on people who have not opted to be vaccinated against the CCP virus, joining officials from several other countries across the globe in backing policies that differentiate by vaccination status.

German Chancellor Angela Merkel said Thursday that in places where hospitalization rates have exceeded a certain threshold, the country will only allow vaccinated people or people who have recovered from COVID-19 to access public, cultural and sports events, and restaurants.

She said the move is needed to combat a “very worrying” fourth wave of the CCP (Chinese Communist Party) virus pandemic, which is currently overburdening hospitals.

She added the federal government is considering a vaccine mandate for care and hospital staff.

“Many of the measures that are now needed would not have been needed if more people were vaccinated,” Merkel said. “And it isn’t too late to get vaccinated now.”

Meanwhile, German lawmakers approved new measures on Thursday that, if approved by the country’s upper house of parliament, would mean that employees would need to prove they are vaccinated, have recently recovered from COVID-19, or have tested negative for the virus, to access their workplaces public transport.

The head of Germany’s disease control agency has warned the country could face a “really terrible Christmas.”

“We are currently heading toward a serious emergency,” Lothar Wieler, director of the Robert Koch Institute, said during an online debate late Wednesday. “We are going to have a really terrible Christmas if we don’t take countermeasures now.”

With the new rules, worshippers can still attend church if they test negative for the CCP virus.

Prime Minister Kyriakos Mitsotakis told the nation in a televised address to “get vaccinated,” and claimed the CCP virus pandemic is one “of the unvaccinated.”

“Greece is mourning unnecessary losses because it simply does not have the vaccination rates of other European countries,” Mitsotakis said. Greece has 62 percent of its population fully vaccinated.

New rules in Greece also mean that people over 60 will have their vaccination certificates expire after seven months from the date of issue, in a bid to have them take a booster dose of the COVID-19 vaccine.

Austria, Slovakia, and the Czech Republic have all limited public life for the unvaccinated this week amid rising CCP virus cases across Europe.

Austria imposed lockdown measures aimed at unvaccinated people, who are now only allowed to leave home to buy groceries, for work, or medical reasons.

In the Czech Republic, only people who are vaccinated or have recovered from COVID-19 in the past six months are allowed to enter a range of venues and events. Slovakia took similar measures. Both governments will also require COVID–19 testing at workplaces.