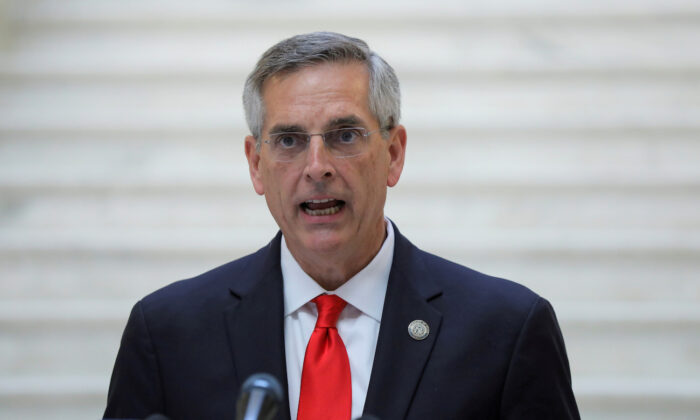 Georgia Secretary of State Brad Raffensperger speaks at a news conference at the State Capitol in Atlanta on Nov. 6, 2020. (Dustin Chambers/Reuters)
US

The allegations originated from good-government group True the Vote, which has promised to release other information on voting irregularities in five other states.

Georgia Secretary of State Brad Raffensperger, a Republican, confirmed to John Solomon of Just the News that a probe is underway and that subpoenas from the state’s election board may soon follow as part of the evidence-gathering process.

True the Vote, which focuses on electoral integrity issues, said in a Jan. 5 statement that following “a year’s worth of research and analysis,” the group “submitted three official complaints to the Georgia Secretary of State’s office regarding occurrences in the 2020 General and 2021 Run-off Elections.”

On Jan. 3, as a result of the complaints, Raffensperger “announced a statewide investigation into ballot trafficking in Georgia.”

True the Vote said that “shockingly similar findings will soon be released to appropriate authorities in five additional states.”

Raffensperger fought efforts by activists, including Democratic Party attorney Marc Elias, to overturn the state’s ballot harvesting ban. He also clashed with then-President Donald Trump and Republicans in 2020 when he dismissed claims that fraud was widespread in the election.

Raffensperger told Solomon that his office considers the allegations that it has received to be sufficiently credible to open an investigation.

“We do have some information, and we are going to investigate that,” Raffensperger said. “We did deploy drop boxes that were under 24/7 surveillance … and we’re really just going through that.”

Ballot collecting, more commonly known as ballot harvesting, is when organized workers or volunteers collect absentee ballots from voters and deliver those ballots to a polling place. The tactic was thrown into the spotlight after Republicans said it helped California Democrats defeat many Republican candidates, including incumbents, turning the state’s congressional delegation deep blue in 2018. Critics say ballot harvesting makes it easier for the votes of illegal aliens and those not interested in the political process to be cast.

Trump repeatedly denounced the practice during the 2020 campaign.

“Get rid of ballot harvesting, it is rampant with fraud,” he wrote on Twitter in April 2020. “The USA must have voter I.D., the only way to get an honest count!”

Half of U.S. states have laws allowing someone besides a voter to return the voter’s mail-in ballot, according to Ballotpedia. Democrats challenged Arizona’s ban on ballot harvesting, but the Supreme Court ruled 6–3 in July 2021 that the prohibition didn’t violate the federal Voting Rights Act, as The Epoch Times previously reported.

Raffensperger also told Just the News that his office didn’t review the surveillance footage from the drop boxes, but that a statistical analysis from research organization Mitre Labs found “no suspicious indicators of ballot harvesting.”

But now that he has specific accusations in hand, his office is acting.

“If people give us … credible allegations, we want to make sure that we do that,” Raffensperger said. “And we have that right now as an ongoing investigation.

“That will be one of the processes we’re looking at if we have people that don’t want to come forward for whatever concern, because we really need to get to the bottom of it. We just can’t let it sit there and lie. So if it comes to that, then that’s probably the next step that we’d be looking at.”