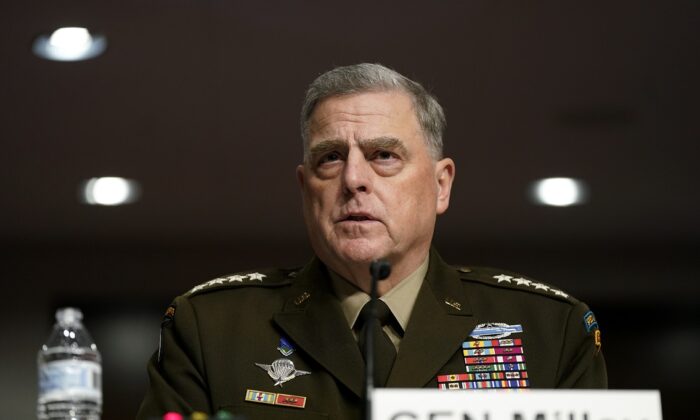 Chairman of the Joint Chiefs of Staff Gen. Mark Milley speaks during a Senate Armed Services Committee hearing on the conclusion of military operations in Afghanistan and plans for future counterterrorism operations on Capitol Hill on Sept. 28, 2021. (Patrick Semansky/Pool/Getty Images)
Viewpoints

The recent actions of Joint Chiefs of Staff Chairman Gen. Mark Milley may constitute the greatest acts of insubordination by a very senior officer in U.S. military history, given the revelations of his conduct.

Milley appears overstuffed in his uniform, which is more laden with decorations than those worn by Gens. George Marshall, Dwight Eisenhower, and Douglas MacArthur combined. Milley’s shoulders identify him as both a Ranger and a paratrooper.

If it hadn’t been in the midst of an election campaign, he would have been fired for his participation in an outrageous denunciation of the walk of the president and many other senior officials to St. John’s Episcopal Church near the White House a day after an effort by “peaceful protesters” to burn it down.

His telephone call to his analog in the People’s Republic of China promising to warn them if the president whom Milley was serving attacked China, his chatter with the rabidly partisan House Speaker Nancy Pelosi in which both of them referred to the president as “crazy,” and the attempted interposition of himself in the chain of command regarding nuclear weapons: these were all gross acts of insubordination that merited summary dismissal.

Despite kissing the undercarriage of the new administration, in testimony to Congress last week, Milley and others claimed to have warned President Joe Biden of the consequences of his proposed withdrawal from Afghanistan.

Milley is grossly indiscreet in endlessly self-promoting with scurrilous political gossip-writers such as Bob Woodward, while unctuously claiming to Congress that he didn’t read the books in which he was so heavily cited.

He must either accept some responsibility for the debacle in Afghanistan or resign in protest against being overruled by the president. He and the other service chiefs should also be called to account for why the United States is lagging behind China and Russia in hypersonic missiles and why they’ve moved so slowly to reduce the vulnerability of the Nimitz class aircraft carriers and far eastern military bases, especially Guam, to sophisticated missile fire.

Nor should he and others responsible be excused for the promotion of critical race theory in the Armed Forces. It’s a disgraceful development.

Next to the principal authorship of the Declaration of Independence, the achievement of Thomas Jefferson for which he deserves the greatest gratitude, but rarely receives it, is the establishment of the U.S. Military Academy at West Point. This was intended to provide the country with a nonpolitical and highly professional officer corps, and in general, it has succeeded in both objectives.

This was never intended to ban senior officers from political life in the United States, but only to ensure that serving officers didn’t become involved in politics. Jefferson would have known from the example of former President George Washington that successful senior officers were apt to be highly desirable political candidates, though Washington was obviously exceptionally meritorious.

Of course, the greatest U.S. military-political controversy was between MacArthur and then-President Harry Truman in 1950, after one of the greatest military operations in the 20th century—MacArthur had landed nearly 100,000 men behind North Korean lines at Inchon in less than an hour and the North Korean invasion of South Korea collapsed in 10 days.

MacArthur’s orders from the president and from the U.N., which provided the forces he was commanding, were to proceed across the 38th parallel and up through North Korea with the presumed intention of reuniting the country.

In the midst of this operation, the People’s Liberation Army, essentially a guerrilla army that had won the nearly 30-year China Civil War the year before, intervened heavily. MacArthur had been assured by his military intelligence that such penetration by China would be impossible. The U.N. forces, (more than 90 percent South Korean and American), were forced back briefly beyond Seoul, the South Korean capital, but MacArthur recaptured that city and stabilized the line at the original demarcation between North and South Korea.

Having been given the mission of reuniting Korea, he didn’t see why his mission should be changed, although the president and other Allied leaders were waffling at the thought of conducting a war against China.

In military terms, MacArthur was undoubtedly correct. A little further effort in the West would have unified Korea. Then-Chinese Premier Chou En-lai confirmed to President Richard Nixon in 1972 that Stalin wouldn’t have lifted a finger to help the Chinese. MacArthur was also basically correct when he told Congress, after Truman had fired him, that a conscript army couldn’t be sent to the ends of the earth at the risk of their lives for any purpose less than a victory clearly in the national interest.

He famously said to Congress, “In war there is no substitute for victory.”

However, it wasn’t acceptable for him to criticize the president’s policies publicly as he did, and Truman had little alternative but to remove him, though he could have done so more elegantly, given MacArthur’s distinction (which made his dismissal an act of political suicide by Truman).

Traditionally, U.S. generals who have rendered conspicuous service are deemed to be above party, demonstrable patriots, people of integrity endowed with high qualities of leadership, trustworthy, and incorruptible.

The only modern occasion when there was a trace of an active senior officer participating in partisan politics was in 1944, when MacArthur responded to a question from a Nebraska congressman, and then to Republican Sen. Arthur Vandenberg, that he was available for the Republican presidential nomination, but that, of course, because of his official and geographic position, he couldn’t conduct an active campaign. He would, however, yield to a spontaneous expression of national will that he become the president.

The idea that MacArthur imagined that he could retain his command in the Southwest Pacific while running as the absentee candidate against the incumbent commander-in-chief is illustrative of how superior the general’s military judgment was to his political judgment. Former President Franklin Roosevelt considered MacArthur to be a potential “man on horseback” and not a fully committed believer in democracy. But he esteemed MacAurthur as a military commander and believed that the general was so out of touch with a popular electorate that he would be an ideal opponent. Roosevelt, running for his fourth term, was unbeatable.

Milley, unlike all the others mentioned above, hasn’t really been a combat general, though he puts on the airs of one: “I wasn’t born a four-star general,” he said to assure senators that he had once been in war zones.

When asked why he hadn’t resigned when the president rejected his advice on Afghanistan, he replied, “My father didn’t resign in the middle of the action at Iwo Jima.” Combat in Iwo Jima required great heroism and resigning in the face of the enemy would have been desertion.

He shouldn’t be clinging to the furniture in his office after commanding a disaster as he did, and when his president denies that Milley gave him the advice that he had claimed to have given, they should both go. But Biden can make it happen for Milley.