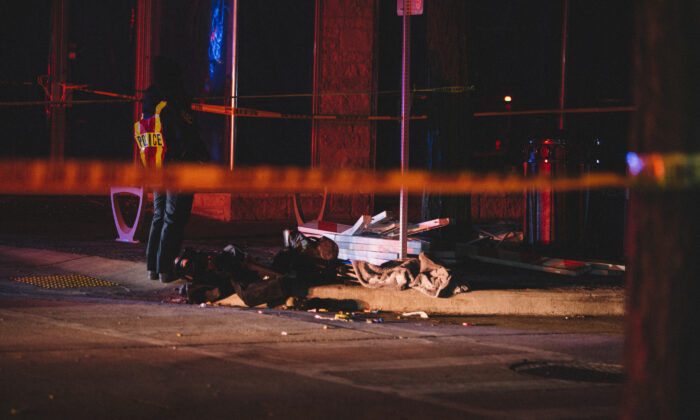 From Waukesha to San Francisco

The deadly actions of the past few days should serve as a wake-up call to most Americans. Being pro-criminal and anti-police is beginning to undermine the fabric of our civilization.

We have already seen a dramatic rise in murders and other crimes.

Now we have a massacre by a convicted criminal who drove a vehicle into a Christmas parade, killing six people and injuring more than 60 who had gathered to celebrate the birth of Christ and the beginning of the Christmas season. The attack in Waukesha, Wisconsin, dazed the country because it was so stunning to see such senseless killing and maiming. It was a frightening reminder that we now live in a country where we can all be at risk at any time and place.

At nearly the same time, 2,159 miles to the west, a mob was breaking into and looting stores. The open vandalism, theft, and destruction resembled a scene from the movie “Clockwork Orange.” It’s a pattern of criminal aggression that has been building in San Francisco since the city’s communist, pro-criminal, anti-law enforcement district attorney took office.

As of last reports, there have been three days of looting in San Francisco, and it has now spread to San Jose. As the looting is more widely reported, there’s a real likelihood it will spread to other cities.

There has been continuous rioting and violence in Portland, Oregon, for almost two years, with Antifa as the primary activist agent.

In New York, there is a no-bail rule that allows criminals to walk out of jail faster than the police can fill out arrest reports. The result has been that the police have simply stopped arresting people for many small crimes. The mayor of a town in New Jersey, across the river from New York City, told me of similar incidents in his community. There, the police kick would-be thieves out of town rather than arrest them, because they know the local prosecutor will simply release the crooks.

The patterns of destruction resemble scenes from Ayn Rand’s 1957 novel “Atlas Shrugged.” Rand believed the inevitable pattern of civilization was for the weak and predatory to make life impossible for the productive and entrepreneurial. She imagined the most competent, energetic, and productive people would withdraw from society, and civilization would subsequently collapse.

Many of our recent developments resemble Rand’s nightmare. Consider the collapse of the rule of law, chaos at the border, and the proposal in New York City to let 800,000 noncitizens vote in local elections. The list goes on.

The tragedy of the breakdown of civilization is: We know how to have law-abiding, safe communities—and have had historic experience in our lifetime.

As I wrote in my new book, “Beyond Biden,” when George Kelling and James Q. Wilson wrote their ground-breaking Broken Windows theory in 1982, they found that if you stop small crimes and disorders, and repair damaged property, you create a positive environment that makes crime decline dramatically.

We know empirically that a sound program of crime prevention, that applies principles that work, leads to safety and prosperity. In 1991, New York City was disastrous, crime-ridden, and dangerous. It became safer—first through Giuliani and then through Mayor Michael Bloomberg. By 2017, New York City had become the safest in its history.

Then, Mayor Bill de Blasio and his Big Government socialist belief in attacking the police and favoring criminals undermined the entire system (which had been protecting the innocent while pursuing the guilty).

Soon the American people are going to grow tired of being sacrificed on the altar of Big Government socialist fanaticism.

The sooner that happens, the sooner we can eliminate lawlessness and return to peaceful civilization.