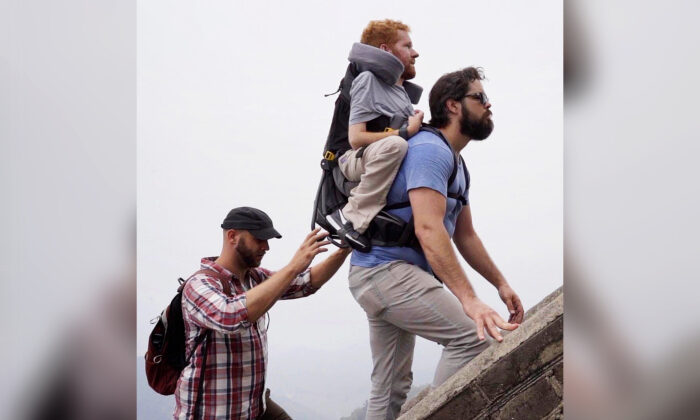 Six firm friends chose not to let one group member’s impaired mobility subdue their thirst for adventure. The only thing that stood in their way was the wheelchair.

So, they designed a backpack instead.

“Whether you’re winning or losing, your battle is not your identity,” 35-year-old Kevan Chandler, who lives in Fort Wayne, Indiana, with his wife, told The Epoch Times by email. “In fact, your response to the battle says more about you than the battle itself.”

Kevan, a writer and founder of nonprofit “We Carry Kevan,” was born with spinal muscular atrophy type 2, a rare neuromuscular disease. He grew up with his parents and two siblings in North Carolina. Kevan’s greatest ambition has always been to see the world. Thus, to make this feat possible, Kevan worked with his father and a few others to design an adapted “backpack,” into which he could be safely strapped and carried.

Taking turns carrying Kevan on their backs, the friends set out on a series of hiking trips to some of the world’s most picturesque locations. Most of their destinations were inaccessible to Kevan by wheelchair.

In 2016, their adventures began in Europe. During this trip, friend and filmmaker Luke Thompson shot a movie: “The View From Here.” Later that same year, the group hiked North Carolina’s Pilot Mountain.

In the summer of 2018, representing their nonprofit, “We Carry Kevan,” they ventured to China for a three-week tour of Guilin, Luoyang, and Beijing—and the formidable Great Wall of China.

After navigating multiple forms of public transport and a gondola ride through the trees, Kevan felt “on top of the world” to scale the Great Wall of China on the final day.

“Past, present, and future all seemed to collapse into one another,” he told The Epoch Times. “We could see for miles all around, especially the higher up we got. And of course, it was a dream to do it with this group of amazing brothers!”

Thompson agreed, claiming he and his favorite travel companions are “building memories together and sharing life.”

“We are [Kevan’s] physical support structure, especially when he is traveling without his chair,” Thompson said. “Our work is focused on listening and asking questions to identify what Kevan may need assistance with.”

He described sharing the backpack with others as an “incredible extension of our mission to redefine accessibility.”

The team collected innumerable fans, followers, and friends along the way, a couple of whom volunteered to carry Kevan for a short while. Thompson shot a six-part documentary series, “We Carry Kevan – In China,” along the way.

During their trip, the group visited two Chinese orphanages for children with special needs. They took prototypes of Kevan’s backpack to a center in Luoyang, providing fun and respite for children who may never have known mobility beyond slings, wheelchairs, and walking frames.

Team adventures aside, Kevan was deeply moved by these interactions.

“Some very dear friendships were forged here with the staff and children, so it wasn’t so much a physical challenge as emotional,” he said, adding that a personal highlight was “rolling around on the floor with the kiddos and truly seeing the life in their sweet eyes.”

Kevan said he was introduced to Jesus by his father at the age of 6, and his faith has since supported him through life’s many trials and tribulations.

“Not only does He give me the strength and grace to live life to the fullest, but His love for me, His death on the cross and resurrection, overrides any shortcomings of my body (which are a lot!) and gives me my true value as a wandering child adopted by God,” Kevan added.

The adapted backpack is now being manufactured for the public and has already been distributed to over 500 families around the world. Anyone is free to sponsor a backpack through the nonprofit’s website.

Thompson sees Kevan’s story resonates with people, and claims this means there’s work yet to be done in normalizing accessibility options. “We are focusing on connecting individuals with backpacks, caregivers, and experiences,” he said.

To date, Kevan and his friends have visited seven countries together. Yet Kevan’s desire is now for others to become the focus, as more people are carried and others choose to become the carriers. He has even written a book about his journey and his mission.

To all those trying to overcome a battle of their own, Kevin advises: “Be patient with your battles, be present and kind with those around you, trust God, and seek Him in your struggles.”