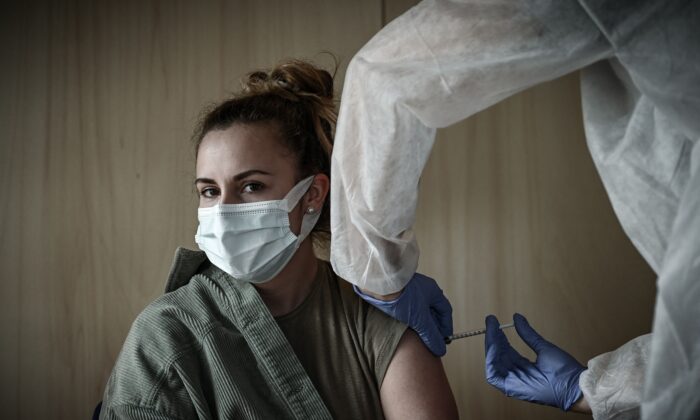 A medical worker vaccinates a patient in a file photo. (Philippe Lopez/AFP via Getty Images)
WORLD

Unvaccinated citizens of France and Italy are set to face tighter restrictions after officials ruled in favor of COVID-19 health passes for those attempting to enter restaurants, bars, and hospitals, as well as travel.

In France, the country’s top constitutional authority on Aug. 5 agreed with most aspects of a new law that requires citizens to carry a special COVID-19 health pass from next week onwards.

A health pass is only given to those who have been fully vaccinated, recently recovered from an infection, or recently tested negative from the virus.

The new restrictions mean residents will only be allowed to access cafes, restaurants, and, in some cases, hospitals, if they show the health pass.

While the pass has been in effect in France since July 21 for cultural and recreational venues, including cinemas, concert halls, and theme parks with capacity for more than 50 people, the new law vastly extends its application.

The Constitutional Council also ruled Thursday that the passes would be required for long-distance travel by train, plane, or bus, The Associated Press reported.

It also approved a ruling that health care workers should be vaccinated against the virus by Sept. 15 and hospital visitors will also require a health pass.

The special court did strike down several measures in the law, including the automatic 10-day isolation of people infected with the virus only being allowed to go outside for only two hours per day, which it said goes against French freedoms.

President Emmanuel Macron announced the proposed legislation in July and it was sped urgently through parliament last week amid an increase in COVID-19 cases in the country due to the highly contagious delta variant.

However, opponents of the measures accuse Macron of trampling on freedoms and discriminating against the unvaccinated.

The court’s recent ruling sparked protests in front of the Constitutional Council in Paris, with several hundred people denouncing the ruling, while more protests are planned for this weekend.

In a similar move on Thursday, government officials in Italy also announced that citizens will be required to show proof of at least one dose of vaccine, a negative coronavirus test, or recent recovery from COVID-19 in order to enter a number of public places.

As of Aug. 6, the pass will be required to go to gyms, swimming pools, sports stadiums, museums, spas, casinos, and cinemas. Eating in indoor restaurants also requires a pass.

Known as a “green pass,” the digital or paper certificate will also be mandatory for travelers on trains, planes, ships, and inter-city coaches from Sept. 1.

Previously, it was only needed for travel within the European Union and to gain access to care homes or large wedding receptions within the country.

Teachers must also show proof of immunity from COVID-19 before entering the classroom, and will not be allowed to work without it.

Staff without passes for five days straight will be suspended and will no longer be paid, Reuters reported.

Back in March, just one month after taking office, Draghi also made it mandatory for health workers to be vaccinated.

“The choice of the government is to invest as much as possible in the Green Pass to avoid closures and to safeguard freedom,” Health Minister Roberto Speranza told reporters.

Italy has so far vaccinated almost 60 percent of its population but is experiencing an increase in cases and hospitalizations amid the spread of the CCP virus delta variant.

The country reported 27 coronavirus-related deaths on Thursday against 21 the day before, the health ministry said, while the daily tally of new infections rose to 7,230 from 6,596.