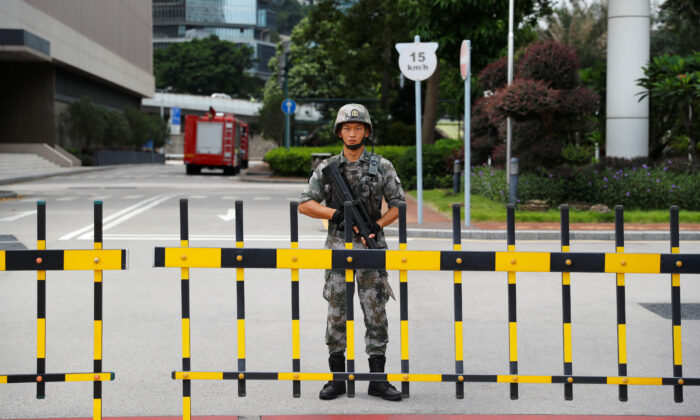 China is expanding its genocidal policies to Hong Kong, with no protest from the world’s democracies

On Jan. 9, an ill wind blew into the Fragrant Harbor. Peng Jingtang, a blood-thirsty paramilitary chief from Xinjiang, was appointed by China’s dictator Xi Jinping to lead Chinese troops in Hong Kong.

For years, Peng led the Chinese Communist Party’s (CCP) crackdown in Xinjiang—where there is an ongoing genocide.

The PAP is primarily charged with countering riots and protests. But Peng led “counterterrorism” efforts in Xinjiang, where there is little terrorism other than that imposed by the CCP itself.

In Xinjiang, the CCP uses the excuse of Uyghur terrorism to enforce its Han bigotry on the territory through a network of concentration camps, “reeducation” centers, and factories in which forced laborers are subjected to slave-like conditions, including torture, rape, mass surveillance, forced abortion, and state-imposed birth control.

In 2019, Peng bragged to the state-controlled Global Times newspaper that his paramilitary police squad had fired as many shots of ammo in Xinjiang in 2018 as all other security forces combined over the prior three years. Xi likely honored Peng’s squad in 2021 for killing 91 “terrorists.”

Now Peng will lead the Chinese military’s Hong Kong garrison, which seeks to put the fear of the CCP into any Hongkongers who might wish for a return to the freedoms of what could be called the inter-imperial years, between Britain’s control of the city and that of Beijing.

Peng’s appointment follows that of Zheng Yanxiong, a CCP official who became the first director of China’s Hong Kong Office for Safeguarding National Security. Zheng was previously an official in China’s southern Guangdong Province, where he suppressed newspapers and imprisoned villagers who opposed land grabs by CCP officials in the area. One protest leader died in police custody.

After Zheng’s appointment in July 2020, the Hong Kong regime imposed a violent crackdown on the city’s free press, including Apple Daily and Stand News.

China’s offices in Hong Kong do not operate according to Hong Kong law, which is a violation of China’s 1984 treaty with Britain that ensured an independent Hong Kong legal system, free speech, press freedoms, and other civil liberties after handover of the city to Beijing’s control in 1997. Those freedoms should have lasted, according to the treaty lodged with the United Nations, for 50 years until at least 2047. All of that is gone now, as is any shred of credibility that Beijing’s solemn treaty promises might previously have had.

After massive Hong Kong street protests of Beijing’s illegal control in 2019, the CCP imposed the National Security Law that not only resulted in the intimidation, imprisonment, and exile of democracy advocates, but had global extraterritorial effect, illegalizing any support anywhere for Hong Kong independence, for example.

Yet, independence should be a right for any territory under the control of a genocidal, and therefore illegal, regime. That includes any part of mainland China, Taiwan, and Hong Kong today. The failure of the world to at least morally support independence and democracy movements in China today is a failure of our morality and democratic ethics.

Electoral candidates in Hong Kong who do not demonstrate loyalty to Beijing are not allowed to stand for election to Hong Kong’s Legislative Council. The CCP only permits Beijing loyalists or “patriots” to hold office in the city, giving the lie to ludicrous CCP claims that communist China is anything close to a real “democracy.”

The dual appointments of Peng and Zheng in Hong Kong add more to the mountain of evidence that Beijing’s intentions in Hong Kong are anything but honorable. The world should finally recognize that the CCP is more of a terrorist, fascist, or mafia organization, than a legitimate source of governance for Hong Kong or China more generally.

The sooner the world faces these unfortunate realities, the sooner we will find effective strategies to defend ourselves. These should include much tougher economic and diplomatic sanctions on the CCP, support for the independence of regions subject to genocide, bans on trade with territories controlled by genocidal organizations, and bans on CCP international travel, including to free world cities like New York, Paris, Geneva, and Rome.

To break from business as usual with China, we must free our minds of the illusion that the CCP is a legitimate political party. The Chinese people deserve democracy and their independence from the totalitarian CCP.