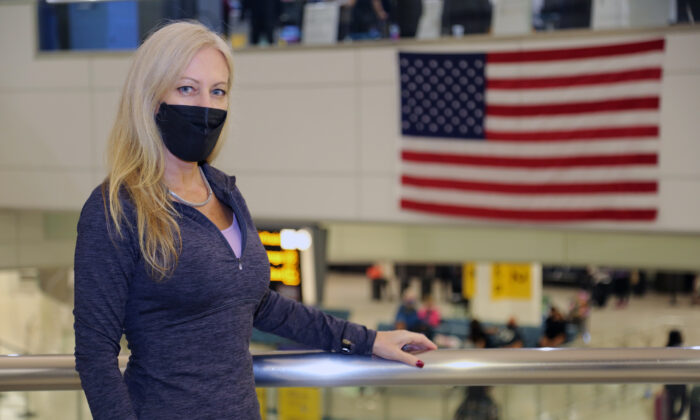 Lisa Williams, a flight attendant who was forced to get the vaccine against COVID-19 and has suffered major health problems since, on Nov. 18, 2021. (Richard Moore/The Epoch Times)
US Features

Lisa Williams, a flight attendant for a major airline, didn’t want to take the vaccine against COVID-19. But, against her conscience, she rolled up her sleeve in tears on Sept. 2 in order to keep her job and feed her three boys.

“I sat down in the chair at the minute clinic, rolled up my sleeve, prayed, asked God to forgive me, and cried,” Williams told The Epoch Times. “The minute they stuck that needle in my arm, pain went up through my neck and I have not been the same since.”

Williams wouldn’t disclose the airline that she works for, but she said she got the vaccine in order to keep her job.

“I don’t have a choice,” she said. “I have bills to pay and three boys to put through school.”

The day that she received the vaccine, Williams began having severe headaches and muscle spasms that would wake her from sleep. She said she went to bed and stayed there for four days in an “almost coma-like state.”

“If it hadn’t been for good friends, I would have laid in that bed and died,” she said. “On Sept. 7, four of my friends came over and made me go to the emergency room.”

Other symptoms had begun to develop, according to Williams.

“I felt as if an elephant was sitting on my chest,” she said, pausing between sentences to breathe properly. “My lungs to this day will not fill all the way up.

“My eyes were swollen almost shut, and I had nausea, fatigue, and a lot of coughing.”

Before taking the vaccine, Williams, 51, said she only took hormone supplements for post-menopausal symptoms.

“Other than vitamins and the stuff to regulate my hormones, I didn’t take any medications,” she said.  “I went to the gym and worked out—I was healthy.”

Along with the physical discomfort she’s experiencing, her health issues were causing financial issues as well, Williams said. After being off of work for eight weeks, she filed a workman’s compensation claim, which was denied.

“I didn’t have any time built in my sick bank,” she said. “I am thousands of dollars in credit card debt. Before this, I had a zero balance on my credit cards. It’s all medical-related debt.”

Although difficult for her, Williams returned to work after eight weeks. She loved being a flight attendant and has devoted three decades to the job.

Since receiving the vaccine, day-to-day living has been difficult—work is even harder—but she says she “has to go on.”

“I am on anti-inflammatories and a pill for migraines that cost me $100 per pill,” she said.

Initially, Williams applied for a religious exemption, but was denied. Then, she applied for a medical exemption because she had COVID-19 in December 2020, but the airline doesn’t accept natural immunity as an exemption.

Williams said her next step is to go to the Cleveland Clinic, where they “seem to understand” the negative effects of the vaccine against the CCP virus.

The Epoch Times, with Williams’ consent, has obtained an official diagnosis from her doctor that lists her as having an “adverse reaction to the COVID-19 vaccine,” which includes fatigue, myalgia, and joint pain.

“I was forced to play Russian roulette with my employer to save my career and provide for my family,” she said. “I lost.”

Adrianna Uballe, another flight attendant, said she also got the COVID-19 vaccine “under duress” and had health complications.

She, too, attempted to get a religious exemption and was denied.

“I called my union rep to seek advice,” she said in a written statement. “I expected good advice and help, but instead all I got was fear. I was told I’m out of time with not many options.”

Uballe said she was told by the union representative that she could “put in for a medical exception,” but that she would probably be denied. She was encouraged to “get the shot, or be terminated.”

“I was told that if I got the shot that day (Nov. 3) and sent a picture of my vaccination card that she (HR for airline) would call the dogs off. That’s when I caved and got the J&J shot—I was terrified,” she said.

Roughly 24 hours after receiving her vaccine, Uballe began to get sick.

“I had a severe allergic reaction to the shot,” she said. “I was rushed to the emergency room because my tongue, lips, and throat were going numb and tingly—then, the itching began.”

Uballe said her entire body started itching all over. Then she became lethargic, hot, and sweaty, with an “awful headache.”

“I was weak, and could barely stand,” she said. “My face swelled up, and [I] could not get enough air in my lungs while taking a breath and had chest pain on my right side.”

While Uballe is continuing to fight her body’s reactions to the vaccine, she has received a letter of investigation from her airline and remains on unpaid leave. She said she’s unable to pay her bills.

For 28 years, Jennifer Kiernan has worked for an airline and has been an “exemplary” employee.  Now, she’s “just a number” who’s in “limbo” when it comes to her employment status, she said.

“I decided against getting the vaccine because of a pre-existing condition,” Kiernan said. “They [the airline] denied it, then I applied for a religious exemption, and they denied that.”

Kiernan said she pays approximately $60 per month to belong to her airline union, so she thought that she could seek support through them.

“I told my union representative that I didn’t want the shot and [asked] what could I do,” she said. “He told me to bite the bullet and get the J & J shot because it was a one-and-done shot, and then I could keep my job.”

The experience has left Kiernan bitter and angry at her employer.

“I am on unpaid leave because I received a letter of investigation with no end in sight,” she said. “I have bills like everyone else.”

The 52-year-old flight attendant said she loves what she does for a living. She said she wouldn’t want to do anything else because she loves the hospitality end of her job, and she enjoys helping people.

“They can hire someone half my age at half the salary,” she said. “It’s all about money and their image at the airline. I never got a backup career like some people have—like a real estate license.”

Unlike her sisters, Kiernan never married or had children and now takes care of and financially supports her 89-year-old mother.

Kiernan said she knows Williams and has seen what the shot has done to her. Because of a pre-existing condition, she said she’s leery about the vaccine. If the shot can “turn a perfectly healthy woman” into someone who can barely move, what will it do to her, she said.

“I have the BRCA-1 gene,” Kiernan said. “It is rare, and I am the fourth out of five children in my family who have been identified with this gene.”

She said the BRCA-1 gene is a mutation “that puts me at a much higher risk of developing breast cancer or ovarian cancer compared with someone who doesn’t have the mutation.”

“I lost my sister to breast cancer,” she said. “I elected to have a complete mastectomy and a hysterectomy to lower my chances of getting cancer as a preventative treatment. I’m afraid of this shot.”

Friends have now become foes, according to Kiernan.

“It is now the vaccinated versus the unvaccinated within my circle of friends and co-workers,” she said. “I have good friends that I have lost because I am standing by my principles. I’ve been called a ‘plague rat’ on social media by people I thought were my friends.”

The CDC maintains that COVID-19 vaccinations are “safe and effective.”