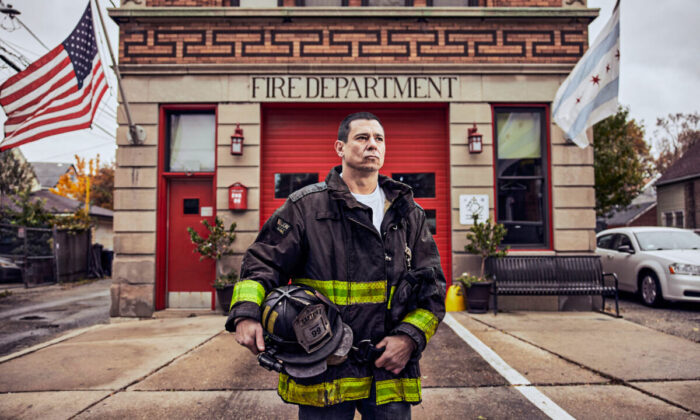 Fire Captain Scott Troogstad in front of his firehouse on the Southwest Side of Chicago, on Nov. 14, 2021. (Nathaniel Smith for The Epoch Times)
US Features

CHICAGO—Government control over people’s lives has spread like fire since the start of the COVID-19 pandemic, according to Scott Troogstad, a fire captain from Chicago.

Small-business owners were deprived of their livelihoods, students couldn’t go to schools, people of faith were forbidden to pray at their churches. Yet it wasn’t his fight, not at the time.

As captain of a firehouse on the Southwest Side of Chicago, Troogstad and his team had to remain on the front line of the pandemic, responding to COVID-19 patients, people overdosed on drugs, and victims of violent crimes.

Many firefighters and paramedics at the Chicago Fire Department contracted the virus, beat the illness after days or weeks of symptoms, and returned to the front line. Four died.

It didn’t take too long before that fire reached his own station.

In August, Chicago Mayor Lori Lightfoot announced her vaccination policy for city workers, including about 5,000 fire department employees. It was simple: All city workers were to be fully vaccinated by Oct. 15, except for those granted medical or religious exemptions.

Troogstad hoped his union would stand up and demand that the mayor loosen the policy, perhaps adding a testing option, or an acknowledgement of natural immunity. After all, his union, Chicago Fire Fighters Union Local 2, has a contract with the city that says any change in conditions of employment requires good-faith bargaining.

But his union didn’t. In fact, most unions representing Chicago city workers didn’t.

The only unions that took a strong stand on the vaccine policy were four law enforcement unions, which represent city police officers, sergeants, lieutenants, and captains.

However, their talks with city eventually broke down.

On Oct. 8, Lightfoot handed out her final vaccine mandate: all city workers had to report their vaccination status through an online portal by mid-October and be fully vaccinated by end of December, except for those with exemptions.

A failure to comply with either deadline would result in an individual being put on no-pay status and only allowed to return to work after complying with the mandate. Lightfoot also warned that those who remained noncompliant could be fired.

“If I don’t take the stand right now, I couldn’t look my children in the eye. That’s the way I feel about it—we are at a point where you have to act to preserve the American freedom for our children,” he told The Epoch Times.

“Finally, we got to a point where the government encroachments started to affect everybody. We got to the point where people are going to rise up. When I say ‘rise up,’ I mean nothing more than simply not comply,” he said.

Troogstad didn’t report his vaccination status through the online portal, nor did he submit a vaccination exemption request. Any acts of compliance, no matter how small, gave validity to the policy, he said.

He became a member of a fighting minority who wouldn’t comply in any way, shape, or form.

By mid-October, roughly three out of 10 fire department employees refused to report their vaccination status by the deadline—it was the second-lowest compliance rate among all city departments.

On Oct. 20, the department put Troogstad on no-pay status, which meant he couldn’t work until he complied with the mandate. That meant a monthly paycheck loss of around $8,00o as a fire captain, and a potential loss of his health insurance in the coming weeks.

His wife, who still works, has health issues and relies on monthly medication costing $5,000. He also supports two children: a son in college and a daughter in high school.

“My wife, I, and my kids are on the same team. I believe the moment we stand in is bigger than anything for us personally,” Troogstad said, almost coming to tears.

“It is time for us to start acting like Americans and reclaim our position as the government. I have nothing but faith in God. It will be a bumpy road, but I will be fine.”

While it’s a fire he can’t extinguish with a fire engine and a hose,  he can fight it with legal tools, he said.

On Oct. 21, a day after he was put on no-pay status, he filed a federal civil lawsuit along with 113 firefighters and paramedics and 21 city workers against the city of Chicago over the vaccine mandate.

The lawsuit stated that when COVID-19 infections were at their worst, firefighters and paramedics fought on the front line to save lives. Many caught the virus, recovered, and gained natural immunity, which several medical experts say is just as effective as the immunity acquired through a vaccine.

It says the city failed to give the employees due process before putting them on no-pay status, a violation of city ordinances. Moreover, it alleges the vaccine mandate violates a fundamental constitutional right—the right to privacy, which includes bodily autonomy.

It’s the type of lawsuit commonly seen across the country as state and federal judges are asked to reconcile the competing interests of public health and personal freedom during a pandemic.

Troogstad’s attorney, Jonathan Lubin, argues that, now that COVID infections are waning, the city’s actions to force a low percentage of unvaccinated essential workers (many of whom have natural immunity already) to get the shots or lose their jobs aren’t directly or rationally related to preserving the life and health of Chicagoans.

Lee also said he trusted the city had arrived at its vaccine policy through an informed, scientific, and rational process, according to a Chicago Sun-Times article.

On Oct. 29, he declined a request by Troogstad and fellow plaintiffs to temporarily halt the city’s vaccine mandate.

In the coming weeks, Lee will consider their request for a preliminary order to stop the mandate, after an examination of more evidence and arguments from both parties.

By Nov. 1, hundreds of previously noncompliant CFD employees changed course and reported their vaccination status. A few decided to do so after being placed on no-pay status and have returned to work.

But Troogstad is staying the course.

“It is a personal stand. It is a moral line in the sand that I would never, ever, allow myself to cross,” he said.

He tries to keep up his hope about the lawsuit, while at the same time looking around for jobs.

His last paycheck arrived on Nov. 5, and it says $600. His side gig at Northern Illinois Public Safety Training Academy training firefighters helps pay some of the bills. He also received donations from a local nonprofit.

But Troogstad needs to look for a job that comes with health benefits to cover his wife’s expensive medication. Any job he could find probably pays half of his fire captain income, he said.

“If I lose the fight, it will break my heart. But God has, and will, set me on a path, and I’ll continue to follow that path wherever it leads me,” Troogstad said.

On Nov. 10, Troogstad’s union filed a lawsuit against the city, accusing it of a union contract violation and demanding it bargain over the vaccine policy. The lawsuit also asks the court to halt the mandate until the discussions yield fruit.

On Nov. 1, Cook County Judge Raymond Mitchell ruled to stay the city’s vaccination deadline for Chicago police only, until such a time when the city and police unions come to an agreement on vaccine policy.

That small victory was won by the police unions, in part, because of police officers such as Stephanie Mingari.

Mingari was among the first group of police officers put on no-pay status for not complying with the vaccine mandate. That delivered hard evidence of the city’s violation of a union contract, she said.

At first, Mingari didn’t think the city would really do this to her.

She asks how police officers who allegedly committed DUI (driving under the influence) and domestic violence are still doing desk work and getting paid, while the city lets officers go home, unpaid, simply because they won’t report their vaccination status.

The city can’t make up rules without her union’s consent, she said.

Also, she thinks there’s another epidemic going on in Chicago—the epidemic of gun violence. In 2021, nearly 4,000 people were shot and 700 were killed, the highest level of violence the city has seen in over a decade. Surely the city would need every police officer on duty to combat the crimes, she said.

Though Mingari isn’t a patrol officer, she’s routinely called on by management to leave her police academy office and work the street when needed.

Earlier this year, she was detailed to a summer mobile unit for several months to beef up the patrol in violent districts on the South Side.

Last year, when the riots broke out, she was working 12 to 14 hours on the street every day for almost two months.

So Mingari said she was really hurt when told by her deputy chiefs to hand in her badge and go home on Oct. 18.

“You are pulling police officers. What about the thousands of people who have been shot or killed this year? What are the priorities? Me being vaccinated, or me out there and patrolling and protecting the citizens?

“I will not comply because they are doing this wrong. This is not about the vaccine. It is about our rights and a lawful order.”

By mid-October, Chicago’s police had the lowest compliance rate of the vaccine mandate among all city departments. It remains so to this day.

Mingari can make her stand because her family still has income and medical insurance from her husband’s job, she said. She feels for coworkers who complied under duress because of financial pressures, and she will fight for them.

“Other unions see that we are fighting and making progress, they are joining the fight too. Unfortunately, it did take our original group of police officers to go into no-pay status, but we made an impact.”

Judge Mitchell wrote in his order: “It is worth remembering that in the darkest days of the pandemic and the months that followed, when I worked remotely in the safety of my home, the men and women of the Chicago Police Department showed up to work. Several died after contracting the virus.

“In light of their terrible sacrifice, the police unions’ request just to have their grievances heard seems a pretty modest ask.

“‘Obey now, grieve later’—a maxim in labor law—is not possible here. If every union member complied and was vaccinated by December 31, they would have no grievance to pursue and there would be no remedy an arbitrator can award.

“An award of back pay or reinstatement cannot undo a vaccine. Nothing can.”