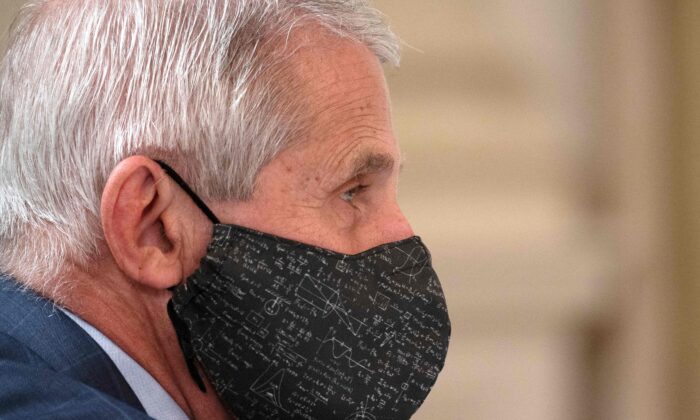 Dr. Anthony Fauci late Monday apologized for indicating the United States might not get COVID-19 under control for about a year.

In an interview on NPR, Fauci said that if things went well, including more people getting vaccinated against the virus that causes COVID-19, then “as we get into the fall and the winter, we could start to really get some good control over this as we get into 2022.”

“I have to apologize. When I listened to the tape, I meant to say the spring of 2022. So I did misspeak,” Fauci said later on CNN.

“In the conversation with Mary Louise Kelly, she was saying, when do I think we can get some control?” he added. “I said if we can get through this winter and get really the majority, overwhelming majority, of the 90 million people who have not been vaccinated, vaccinated, I hope we could start to get some good control in the spring of 2022. I didn’t mean the fall. I misspoke, my bad.”

Fauci, President Joe Biden’s chief medical adviser, is the longtime director of the National Institute of Allergy and Infectious Diseases. He frequently appears on television programs to discuss developments in the U.S. response to the COVID-19 pandemic. Fauci has received criticism for misspeaking a number of times, and for acknowledging he misled the American public on the issue of masks early in the pandemic because of concern over the mask supply.

“When he’s pressed about the number for herd immunity, at first, it was 60 percent, then all the way up to 90 percent. When people asked him, ‘Why does your goalpost keep moving?’ He says, ‘Well, I feel like the American people are now ready to hear what I have to say,'” Dr. Nicole Saphier said on The Epoch Times’ “American Thought Leaders” program in June.

The change in Fauci’s position from the fall to the spring of next year also drew some criticism.

“Cases always plummet in the spring—regardless of vaccination,” Dr. James Todaro, a partner in Greymatter Capital, wrote on Twitter.

Approximately 61 percent of the total U.S. population, or 201.7 million people, have gotten at least one COVID-19 vaccine dose as of Aug. 23, according to federal data. People 12 years old or older can get a vaccine.

He said he believes approximately 20 percent of the roughly 90 million Americans who have not been vaccinated against the virus will now get vaccinated because of the approval.

One way to motivate people to get vaccinated, he added, is the imposition of vaccine mandates.

“I think you’re going to see a lot more mandates and hopefully a combination of people who, on their own, decide because of this stamp of approval that they want to get vaccinated, combined with the mandates that we may be able to make a big dent in that 90 million people or so who are eligible but not vaccinated,” he said.

Biden, a Democrat, called on American companies to implement vaccine mandates during a speech on Monday.

“And when I say up to us, I mean it’s really how many people get vaccinated, how many people step up and say, you know, we’ve had enough of this, we’ve got to put an end to this terrible outbreak that’s completely disrupted our lives,” he said on “CBS This Morning” on Tuesday.

On the issue of herd immunity, or the number of people who have been vaccinated and who enjoy immunity against the CCP virus due to recovering from COVID-19, Fauci said it’s still not clear.

“You don’t know whether that’s 80, 85, or 90 percent, you just don’t know,” the doctor, who has largely ignored the growing body of science on natural immunity, said. “And when you don’t know, the thing to do is to just do whatever you can to get as many people vaccinated as you can. And when you reach that point, you’ll know it, because you won’t have any infections.”