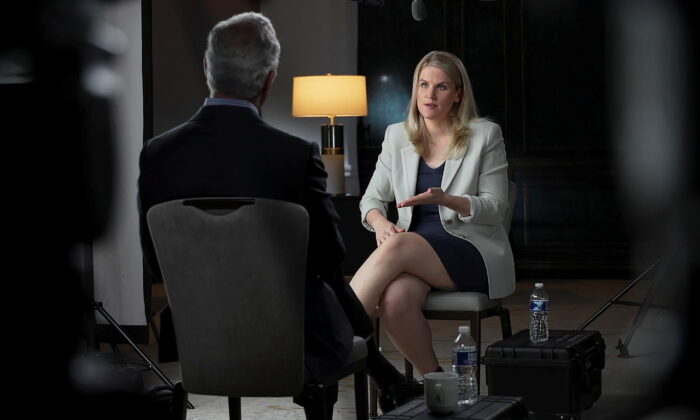 A Facebook whistleblower who is due to testify before Congress on Oct. 5 has accused the Big Tech company of repeatedly putting profit before doing “what was good for the public,” including clamping down on hate speech.

Frances Haugen, who told CBS News’ “60 Minutes” program that she was recruited by Facebook as a product manager on the civic misinformation team in 2019, said she and her attorneys have filed at least eight complaints with the U.S. Securities and Exchange Commission.

During her appearance on the television program broadcasted on Oct. 3, Haugen revealed that she was the whistleblower who provided the internal documents for a Sept. 14 exposé by The Wall Street Journal that claims Instagram has a “toxic” impact on the self-esteem of young girls.

That investigation claimed that the social media giant knows about the issue but “made minimal efforts to address these issues and plays them down in public.”

She explained that Facebook did so by “picking out” content that “gets engagement or reaction,” even it that content is hateful, divisive, or polarizing, because “it’s easier to inspire people to anger than it is to other emotions.”

“Facebook has realized that if they change the algorithm to be safer, people will spend less time on the site, they’ll click on less ads, they’ll make less money,” she claimed.

Haugen is expected to testify at a Senate hearing, titled “Protecting Kids Online,” about Facebook’s knowledge regarding the photo-sharing app’s allegedly harmful effects on children.

During her appearance on the television program, Haugen also accused Facebook of lying to the public about the progress it made to rein in hate speech on the social media platform. She further accused the company of fueling division and violence in the United States and worldwide.

“When we live in an information environment that is full of angry, hateful, polarizing content it erodes our civic trust, it erodes our faith in each other, it erodes our ability to want to care for each other. The version of Facebook that exists today is tearing our societies apart and causing ethnic violence around the world,” she said.

She added that Facebook was used to help organize the breach of the U.S. Capitol building on Jan. 6, after the company switched off its safety systems following the U.S. presidential elections.

While she believed no one at Facebook was “malevolent,” she said the company had misaligned incentives.

“Facebook makes more money when you consume more content,” she said. “People enjoy engaging with things that elicit an emotional reaction. And the more anger that they get exposed to, the more they interact and the more they consume.”

“We continue to make significant improvements to tackle the spread of misinformation and harmful content,” said Pietsch. “To suggest we encourage bad content and do nothing is just not true.”

Separately, Nick Clegg, Facebook’s vice president of global affairs, told CNN before the interview aired that it was “ludicrous” to assert that social media was to blame for the events that unfolded on Jan. 6.