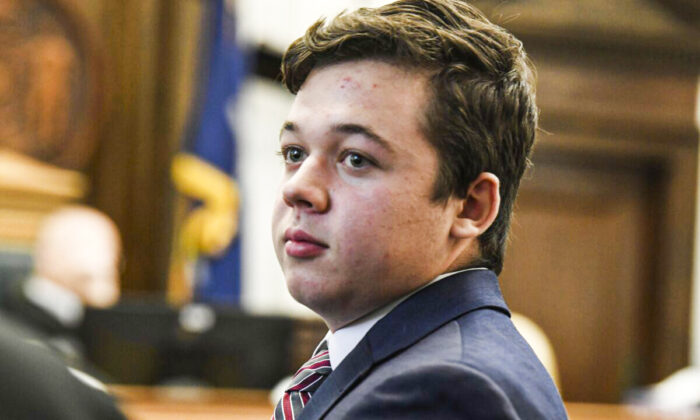 Facebook users are unable to find anything when searching for the name “Kyle Rittenhouse” in the social media platform’s search bar as the 18-year-old appears in court at his homicide trial in Kenosha, Wisconsin.

He is also charged with possession of a dangerous weapon while under the age of 18, a misdemeanor.

The former police youth cadet is testifying in his own defense. His defense team has argued he acted in self-defense when he opened fire.

But while his trial takes place, a Facebook search for Rittenhouse turns up no results, even when using both the mobile and desktop version of the platform.

It is unclear why search results are not appearing. The Epoch Times has contacted Facebook for comment.

Bizarrely, searches with the misspelled name “Kyle Rittenhouses” showed results as did “Rittenhouse Kyle” and just the last name “Rittenhouse.”

“It’s not actually new,” a Facebook representative told The Verge at the time. “We block searches for a ton of stuff—for instance, child exploitation content.”

The social media giant also said it was taking proactive measures to limit information in the wake of the incident, and a spokesperson told The Verge Facebook had, “designated this shooting as a mass murder and [had] removed the shooter’s accounts from Facebook and Instagram.”

Facebook confirmed to the Daily Caller in September that it had banned all content in praise of Rittenhouse, including posts from users who argue he acted in self-defense, and had placed him on a list of “dangerous individuals and organizations.”

During his testimony on Wednesday, Rittenhouse broke into tears, prompting the judge to take a short break to allow the teenager to compose himself.

On the night of the shooting, Rittenhouse said that after he spoke to a friend on the phone, he started toward Car Source to put out fires that were set during riots.

Before he shot Rosenbaum, Rittenhouse said Rosenbaum had threatened to kill him. Rosenbaum, he added, was “walking with a steel chain and he had a blue mask around his face” and “was just mad about something.”

The teen said that he was trying to determine if any of the people at the protest “needed medical help” before Rosenbaum screamed, “If I catch any of you [expletive] alone, I’m going to [expletive] kill you.”

He recalled: “After he throws the bag and he continues to run, he’s gaining speed on me, a gunshot is fired from behind me, directly behind me. I take a few steps, and that’s when I turn around. As I’m turning around, Mr. Rosenbaum is … coming at me with his arms out in front of him. I remember his hand on the barrel of my gun.”

When asked by defense attorney Mark Richards about Rosenbaum lunging at him, he replied, “I shoot him.”

He testified that he continued running with the intention of going to the police. “I didn’t do anything wrong. I defended myself,” Rittenhouse said.

Rittenhouse later claimed that Anthony Huber, who was also fatally shot, had tried to swing his skateboard at him “like a baseball bat” before hitting him. Rittenhouse said he fired his weapon once.

The teenager told prosecutors that Huber had hit him in the head twice with the skateboard and “was attacking me so I pulled the trigger,” but that he “didn’t know where the bullet would have went exactly” when it was fired at Huber.

During thorough questioning by prosecutors, Rittenhouse remained adamant that he his intention was not to kill Huber, telling them that, “If I didn’t pull the trigger, I thought Mr Huber was going to kill me,” and that he acted so that Huber would “no longer be a threat to my safety.”

Rittenhouse told prosecutors that he had “been attacked by several people” when Grosskreutz, moved towards him “with a gun in his hand,” and that he believed Grosskreutz “was a threat” to him.

“My rifle is down. His hands are up. His pistol is in his hand, and then he looks at me, and that’s when he brings his arm down … like his arm is like that with me on the ground and his pistol is pointed at me,” Rittenhouse said. “That’s when I shoot him,” he continued.

Rittenhouse faces life in prison if he’s convicted of the most serious charge against him.

UPDATE: This article has been updated to include further details from the testimony in Rittenhouse’s trial.