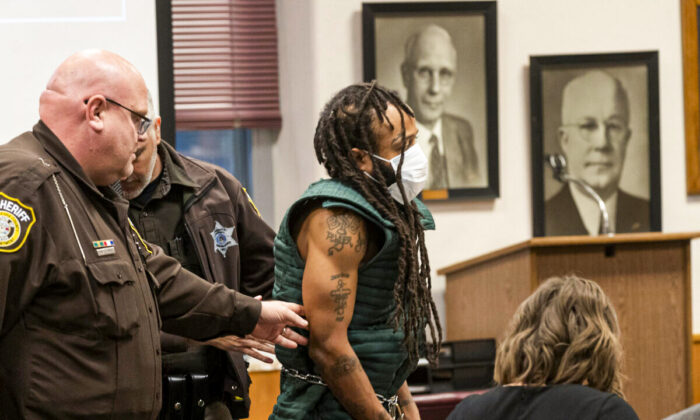 The suspect accused of killing at least five people and injuring dozens more after driving a vehicle through a Christmas parade allegedly made a social media post that promoted violence toward white people amid last year’s riots and protests.

Darrell Brooks, 39, appeared to be an amateur rapper with the moniker “MathBoy Fly” who appeared in several YouTube videos, had several social media accounts, and had a SoundCloud page. A since-deleted YouTube channel features several music videos of a man who strongly resembles Brooks, and a red SUV could be seen in at least one of the clips.

Daniel Thompson, the police chief of Waukesha, Wisconsin, said Monday that authorities had no reason to suspect the mass killing incident was related to terrorism. Thompson did not provide a motive in the case, and he also didn’t elaborate on why officials came to that conclusion.

Brooks was charged Tuesday with five counts of intentional homicide for allegedly mowing down parade-goers and bystanders in Waukesha, Wisconsin, on Sunday evening. His bail was set for $5 million.

A now-deleted Facebook account—”MathBoi Fly”—linked to Darrell Brooks, 39, suggested he made a post in June 2020 that “so when we start bakk knokkin white ppl [expletive] out ion wanna hear it.. the old while ppl 2 … KNOKK DEM [expletive] OUT!! PERIOD (sic).”

On Friday, the MathBoi Fly account also commented on the Kyle Rittenhouse acquittal verdict. “I wasn’t surprised 1 bit,” he wrote in response to a friend.

In 2015, the same account also allegedly posted a graphic about Adolf Hitler and the “real Jews,” alleging that black people are “the true Hebrews” and that the United States government moved “false white Jews into a state of Israel.” The meme appears to include claims from the Black Hebrew Israelite movement, who believe that black people are descendants of the Israelites in the Old Testament.

Meanwhile, a post made on the “MathBoi Fly” Twitter account was directed at rapper Kanye West, including a red baseball cap that reads, “Wire Kanye’s Jaw Shut Again.” Brooks’ Twitter account also posted a picture of black nationalist Malcolm X that included his quote, in part, importing supporters to “help Africa in its struggle to free itself from Western domination.”

The same account shared an article from ESPN last year about NBA player Kyle Kuzma talking about “what white privilege” is. It shared a post about a white officer’s conduct toward Black Lives Matter protesters about a week earlier.

In one of the tracks released by Mathboi Fly on Soundcloud, it includes the lyrics, “Yeah, we terrorists,” and references being a “killer in the city.” The song, “Loudmouths,” was posted to his Soundcloud page about three years ago.

A separate track, “All the Smoke,” appeared to include a photo of an individual holding a rifle. Another, “No Safety,” has lyrics that include “slidin’ through this city with no safety on,” referring to the mechanism designed to prevent the accidental discharge of a firearm.

A video for one of Brooks’ songs showed him rapping with a gun in his hand in front of a red SUV that appears markedly similar to the one that plowed through numerous parade-goers during Sunday’s incident.

The Epoch Times has contacted the Waukesha Police Department for comment on the posts. It’s not clear if Brooks has an attorney.