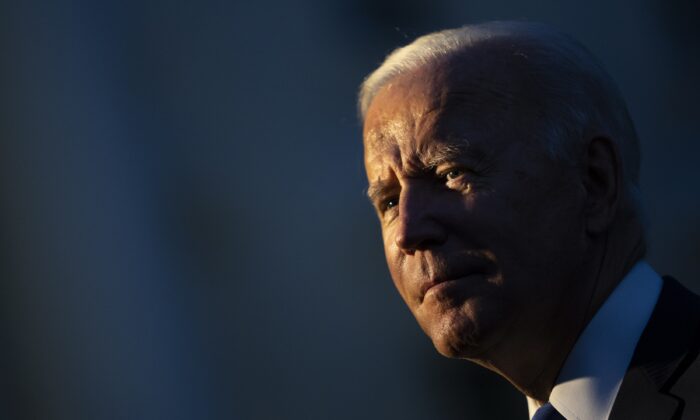 President Joe Biden speaks to reporters as he arrives on the South Lawn of the White House on Oct. 15, 2021. (Drew Angerer/Getty Images)
US News

The Department of Justice (DOJ) said on Oct. 15 that it will decide whether to take action against people who defy subpoenas from a congressional panel investigating the Jan. 6 breach of the U.S. Capitol.

“The Department of Justice will make its own independent decisions in all prosecutions based solely on the facts and the law. Period. Full stop,” a DOJ spokesperson told news outlets in a statement.

President Joe Biden told reporters earlier in the day that he would like the congressional panel and the DOJ to act against the people who are ducking subpoenas.

“I hope that the committee goes after them and holds them accountable,” Biden said, before being asked if he thinks the DOJ should initiate prosecution in such cases. “I do, yes.”

Biden has previously said the DOJ would act independently during his administration.

House Speaker Nancy Pelosi (D-Calif.) convened a panel to probe the Capitol breach after Senate Republicans rejected a measure to establish a Jan. 6 commission. The panel, which includes only two Republicans—both of whom voted to impeach former President Donald Trump—has issued a flurry of subpoenas in recent weeks, including to former Trump administration officials Kash Patel, Mark Meadows, and Steve Bannon.

Patel and Meadows are engaging with the committee, but Bannon “has indicated that he will try to hide behind vague references to privileges of the former President,” panel Chairman Bennie Thompson (D-Miss.) and Vice Chair Liz Cheney (R-Wyo.) said in a recent joint statement.

They also said they would “not allow any witness to defy a lawful subpoena or attempt to run out the clock,” according to the statement. “We will swiftly consider advancing a criminal contempt of Congress referral.”

Robert Costello, a lawyer for Bannon, said in a recent letter to the committee that Bannon refuses to comply because of Trump’s argument that he can invoke executive privilege to block Bannon’s testimony.

Trump sent a letter to the National Archives and Records Administration on Oct. 8 asserting executive privilege over some of the records the panel is seeking.

The same day, White House counsel Dana Remus told the archives that Trump using the privilege “is not in the best interests of the United States” and that Biden was waiving the privilege.

The committee is scheduled to vote on holding Bannon in contempt of Congress on Oct. 19. If approved, the measure would then go to the full House, where Democrats hold a slim majority, for a vote. If the House holds Bannon in contempt, the matter would be referred to the DOJ.