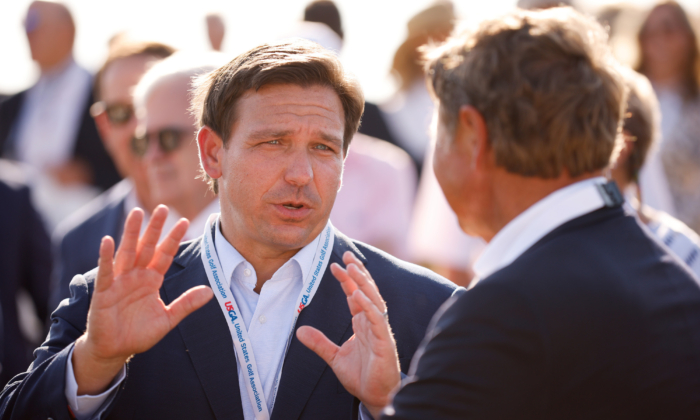 DeSantis on Critical Race Theory: ‘Offensive’ to Expect Taxpayers to Pay to Teach Kids to ‘Hate Their Country’

Florida Republican Gov. Ron DeSantis said on May 21 that he opposes teaching critical race theory being taught in the state’s public schools, claiming that the ideas pushed by its advocates are “based on false history” and are “teaching kids to hate their country and to hate each other.”

DeSantis made the remarks at a May 21 press conference in Pensacola, where he announced the signing of a bill temporarily establishing several statewide tax-free periods on items like storm supplies and back-to-school products.

In a recent interview on NTD’s “Focus Talk,” Yiatin Chu, an Asian mother of two and co-chair of the New York chapter of the Foundation Against Intolerance and Racism (FAIR), described critical race theory as pushing the idea that disparate outcomes, such as academic competency scores, can be reduced to a single variable: race.

Advocates of the theory, which she said is increasingly being taught at pre-college levels, push the socialist notion of equality of outcome, and blame differences in outcomes on entrenched privilege while dividing people into “oppressors” and their victims, the “oppressed.”

Republicans across the nation are trying to prevent the teaching of critical race theory in classrooms.

Recently, South Dakota’s Republican Gov. Kristi Noem took aim at both the “1619 Project” and critical race theory. Like DeSantis, she voiced opposition to their incorporation into school curriculums.

The “1619 Project,” inaugurated with a special issue of The New York Times Magazine, has attempted to cast the Atlantic slave trade as the dominant factor in the founding of the United States, rather than ideals such as individual liberty and natural rights. The initiative has been widely panned by historians and political scientists, with some critics calling it a bid to rewrite U.S. history through a left-wing lens.

“This isn’t a project about trying to teach children that our country is evil, but it is a project trying to teach children the truth about what our country was based upon, and it’s only in really confronting that truth—slavery was foundational to the United States. We, after the slavery, experienced 100 years of legalized discrimination against black Americans,” Hannah-Jones said. “Mitch McConnell and others like him want for our children to get a propagandistic, nationalistic understanding of history that is not about facts, but it is about how they would want to pretend that our country is.”

Proponents of critical race theory have argued that it’s needed to demonstrate what they say is “pervasive systemic racism” and to facilitate rooting it out.