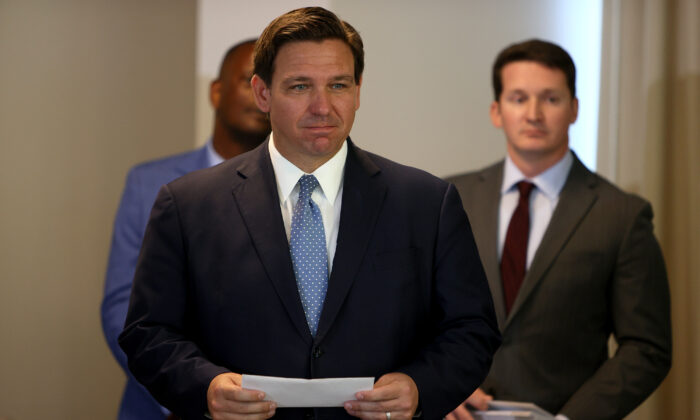 Florida Gov. Ron DeSantis waits to present a check to a first responder during an event to give out bonuses to them held at the Grand Beach Hotel Surfside in Surfside, Florida, on Aug. 10, 2021. (Joe Raedle/Getty Images)
Florida

“This is probably the best thing that we can do to reduce the number of people that require hospitalization,” DeSantis said at a news conference in Jacksonville, adding that vaccines were strongly encouraged and were effective at preventing hospitalizations and deaths by at least 70 percent.

“Clear benefits to this early treatment is keeping people out of the hospital and reducing mortality,” he said.

DeSantis noted the experimental monoclonal antibodies developed by Regeneron Pharmaceuticals were used by President Donald Trump after he contracted the CCP (Chinese Communist Party) virus, which causes COVID-19, in October 2020. Trump recovered in a matter of days.

A study released in April showed Regeneron’s antibody cocktail helped people recover faster after falling ill, and when given in the early stages, could prevent people from becoming sick with the virus.

Monoclonal antibody treatment is not well known, according to the governor, because it received federal emergency use authorization around the same time as the vaccines were being approved, and that the “focus rightfully was on vaccines at the time.” He said he felt that it was important to utilize this treatment alongside vaccines, and it was, in his opinion, “the most effective yet for people who are already infected.”

The Department of Health and Human Services website describes these monoclonal antibodies as “laboratory-produced molecules that may block the virus that causes COVID-19 from attaching to human cells, making it more difficult for the virus to reproduce and cause harm. These antibodies could help the immune system respond more effectively to the virus.”

For seniors—the most vulnerable population in Florida—Gov. DeSantis said he would be initiating “strike teams” to enter nursing homes that had had an outbreak and perform the antibody treatment on those who were exposed to COVID-19 to stop the spread.

He also said the state’s surgeon general, Dr. Scott Rivkees, will issue an order to make certain sites available to people who meet certain criteria where they won’t need a doctor’s prescription. Anyone is eligible, especially those in high-risk categories such as the elderly and those with diabetes, autoimmune disorders, and other preexisting conditions.

The rise in case numbers has alarmed many around the state, including public school officials, who are encouraging the use of masks and social distancing. DeSantis said as the seasons change, “waves” in COVID-19 cases will ebb and flow.

“Waves are something we have to deal with; waves are not uniform,” DeSantis said at the press conference. “Personal mitigation is a personal choice. COVID is not going to go away and early treatment is the most effective we can do.”

“These monoclonal antibody therapy sites will expand access to proven effective COVID-19 treatment,” Scheppke said. “The treatment reduces severe illness, hospitalization, and death risk by 70 percent, and reduces the odds of household contacts developing COVID-19 by 82 percent. Monoclonal antibody therapy helps prevent the COVID-19 virus from attaching to human cells, and is effective against variants of concern, including the Delta variant.”

DeSantis told the group at the press conference that he would like to get ahead of the virus as to keep the COVID infection rate down.

“You can approach it on the front end by protecting yourself,” he said. “But, of course, if you end up in a situation where you are infected and at high risk, getting in here early, this is the best shot we’ve got right now to keep people out of the hospital and keep them safe.”

To find locations to receive monoclonal antibody treatments around the entire state there is a website to find information; floridahealthcovid19.gov.