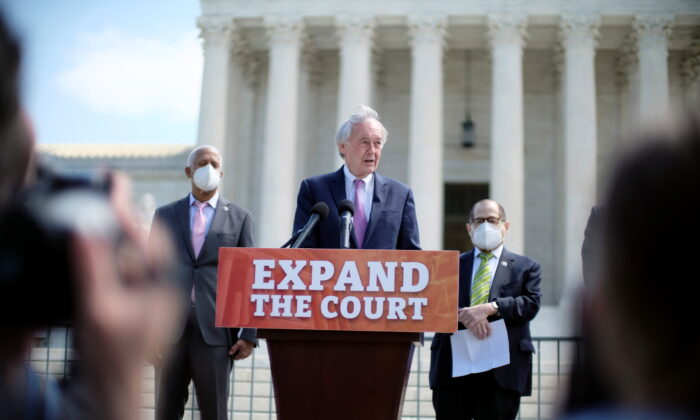 A group of Democrats on Thursday unveiled their bill to expand the Supreme Court, but party leaders showed little support and Republicans assailed the proposal as radical.

The “Judiciary Act of 2021” would add four seats to the nation’s top court, effectively flipping the balance from 6–3 in favor of conservative-appointed justices to 7–6 in the opposite direction.

The rationale fueling the proposal is that Republicans confirmed Justice Amy Coney Barrett after Justice Ruth Bader Ginsburg died last year. The GOP broke no rules or laws, but some Democrats were bitter that they did not hold the seat open for whoever won the 2020 election.

“Republicans stole the Court’s majority, with Justice Amy Coney Barrett’s confirmation completing their crime spree,” Sen. Ed Markey (D-Mass.) said in a statement. “This legislation will restore the Court’s balance and public standing and begin to repair the damage done to our judiciary and democracy.”

The representatives tried taking another angle on the proposal. Thirteen seats, they said, would match up well with the 13 circuit courts.

Top Democrats, though, showed lukewarm support for the proposal.

“I have no plans to bring it to the floor,” House Speaker Nancy Pelosi (D-Calif.) told reporters in Washington, as she voiced support for President Joe Biden’s commission to study possible changes to the court.

“I just heard about it. I’m not ready to sign on yet. I think this commission of Biden is the right move,” Sen. Dick Durbin (D-Ill.), the Senate majority whip, added.

Sen. Joe Manchin (D-W.Va.), one of the most moderate Senate Democrats, said separately Thursday that he opposes expanding the court.

Republicans decried the proposal as one of a number of Democrat attacks on institutions, including efforts to eliminate the filibuster.

“Last week, President Biden, who was marketed to the country as a moderate and an institutionalist, jumped in with both feet, set up a pseudo-academic commission to study the merits of packing the Supreme Court, just an attempt to close this transparent power play in fake legitimacy. But, alas, the far-left cannot even wait for the fake theatrics of the fake study to play out,” Senate Republican Leader Mitch McConnell (R-Ky.) said on the Senate floor.

House Minority Leader Kevin McCarthy (R-Calif.) accused Democrats of promoting a “plan to dismantle a government institution in pursuit of their socialist agenda.”

“Never in my time in politics did I ever believe they would go this far,” he added in his weekly press conference on Capitol Hill. “I question: is there a moderate Democrat left in the party?”

A counterproposal was introduced by Rep. Mike Gallagher (R-Wis.) earlier this week. His constitutional amendment proposal would limit the number of justices to nine.

Congress can adjust the number of seats on the Supreme Court with legislation, but it has been at nine seats since 1869. The last major effort to change the number, by President Franklin Roosevelt, a Democrat, was rejected in 1937 by Congress.

Democrats face an uphill battle in getting the bill passed. Their already-slim majority in the House shrunk to six seats with the swearing-in of Rep. Julia Letlow (R-La.), while they hold control of the Senate only through the ability of Vice President Kamala Harris to cast tiebreaking votes. A single defection such as Manchin means they would have to convince at least one Republican to join them, which is widely seen as unlikely.

Jones told reporters in Washington he “would have been shocked” if Pelosi had immediately backed the bill, claiming he would not have wanted that because he and the other proponents have not had a chance to speak with fellow Democrats about the legislation.

“The Supreme Court will continue to render down terrible decisions out of step with the American public and we will continue to, I think, see the Democratic caucus unified behind this in the House, in the Senate,” he said.