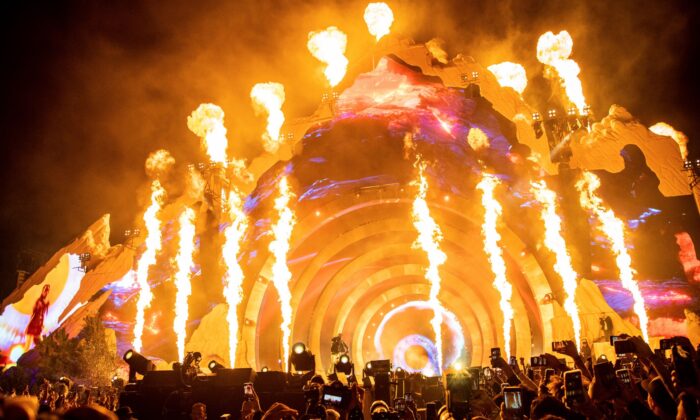 Travis Scott performs at Day 1 of the Astroworld Music Festival at NRG Park in Houston on Nov. 5, 2021. (Amy Harris/Invision/AP)
Crime and Incidents

Police officials said at least eight people were killed and many others injured in a crush when fans surged toward the stage at the Astroworld music festival in Houston on Nov. 5 while rapper Travis Scott was performing.

“This is a tragic night,” Houston Fire Chief Samuel Peña told a news conference outside NRG Park, the event venue.

“Eight confirmed fatalities, and we had scores of individuals that were injured,” he added, describing what occurred as a “mass casualty incident.”

Around 50,000 fans were in attendance at the festival, Peña said, when at around 9 p.m. “the crowd began to compress towards the front of the stage, and that caused some panic, and it started causing some injuries.”

“People began to fall out, become unconscious, and it created additional panic,” he said, adding that emergency response teams transported 17 people to area hospitals, with 11 of the victims in cardiac arrest.

Harris County Judge Lina Hidalgo said that some of those taken to hospital were as young as ten years old.

“Tonight’s focus … needs to be on the families and on the lives that we lost,” Hidalgo said. “Many of them extremely young, tragically young.”

“Our hearts are broken. People go to these events looking for a good time, a chance to unwind, to make memories,” Hidalgo said. “It’s not the kind of event you go to to find out about fatalities.”

The fire chief said the cause of death of the 8 deceased will not be officially known until the medical examiner has completed an investigation.

Houston Police Executive Assistant Chief Larry Satterwhite who was near the front of the crowd and told reporters at the press conference that the surge happened suddenly and played out over the course “of just a few minutes.”

“Suddenly we had several people down on the ground, experiencing some type of cardiac arrest or some type of medical episode,” Satterwhite said. “And so we immediately started doing CPR, and moving people right then, and that’s when I went and met with the promoters, and Live Nation, and they agreed to end early in the interest of public safety.”

The fire chief said that the event organizers had a “medical component” on hand to deal with emergencies, but “they were quickly overwhelmed when the crowd started falling out.”

Over 300 people were treated at an emergency field hospital set up at the venue, Peña said, with over 55 Houston Fire Department units later stepping in to provide assistance.

The show was canceled shortly after the incident, and the Houston Office of Emergency Management later announced that the Astroworld event had been canceled for Saturday.

“Please keep the eight victims and the hundreds injured in your thoughts and prayers,” the agency wrote in a tweet.

Houston Police Chief Troy Finner said “it’s very important that none of us speculate” about what caused the surge and to allow investigators to complete their work.

“Nobody has all the answers tonight,” he said. “We just don’t know. And we will find out. So, pray for these families.”