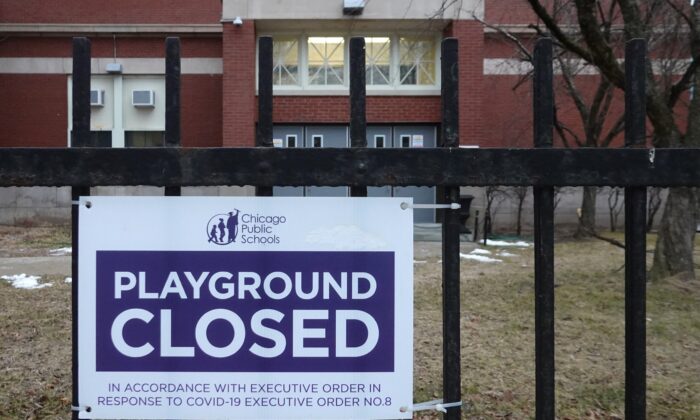 A sign outside of Columbus Elementary School lets visitors know that the playground has been closed in Chicago, Illinois, on Jan. 25, 2021. Chicago Public School teachers were scheduled to return to the classroom for in-person learning, but the union objected and voted to continue remote learning. (Scott Olson/Getty Images)
Education

The COVID-19 pandemic has exacerbated teacher shortages in public schools across the United States, forcing some to return to remote learning.

Teacher shortages and difficulties filling job openings have been reported in Tennessee, New Jersey, and South Dakota, which saw one school district begin the year with 120 teacher vacancies.

In Texas, Houston, Waco, and a number of other districts saw hundreds of teaching vacancies unfilled at the start of the year.

In one California school district, staff are reportedly sending flyers home with students to let parents know the district is “now hiring.”

The shortage comes amid a spike in retirements and resignations of teachers prompted by the stress of the COVID-19 pandemic. Additionally, schools are already under pressure to hire tutors to make up for lost learning time, while more positions need to be filled in order to run online learning classes for those who aren’t ready to return.

According to a June poll that surveyed 2,690 members of the National Education Association between May 19 and May 26, one-third of members reported plans to leave education sooner than they had initially planned as a result of the pandemic, which could further exacerbate the existing teacher shortage.

The survey noted that a higher proportion of teachers had reported experiencing frequent job-related stress and symptoms of depression when compared to the general population, citing pandemic-era teaching conditions, such as technical problems while teaching remotely, as just some of those job-related stresses.

Public schools across the United States were already suffering from teacher shortages, particularly in math, science, special education, and languages, prior to the pandemic. But several of them have now been forced to shut down and return to remote learning amid further unfilled vacancies.

Linda Darling-Hammond, president of California’s State Board of Education, said the shortage was “really a nationwide issue and definitely a statewide issue.”

The shortages could potentially lead to some schools, particularly those in low-income communities, hiring under-qualified teachers as they race to fill vacant positions while class sizes expand.

One school, Mount Diablo Unified School District, which serves 28,000 students east of San Francisco, has filled several of its elementary classrooms at the maximum capacity of 32 students—even while social distancing rules remain in place—in an effort to relieve pressure from remote teachers.

Initially, around 150 children had signed up for distance learning. But that number soon spiked to 600 during the pandemic.

As a result, some schools—including Mount Diablo district—are now offering sizable bonus schemes for some of their teachers in an effort to fill vacancies.

Another California school district, San Francisco Unified, is offering a similar bonus scheme for 100 paraeducator jobs, while nearby West Contra Costa County Unified School District is providing $6,000 signing bonuses for teachers, with a third of that paid out after the first month.

And the teacher shortage isn’t just a problem facing U.S. schools. In New South Wales (NSW), Australia, the alarming shortage of teachers led to numerous occasions of combined classes of up to 45 students and minimal supervision throughout regional and intercity schools.

“This is an example of the very real impact teacher shortages are having on students and teachers in schools from the inner west of Sydney to the Far West of NSW,” NSW Teachers Federation President Angelo Gavrielatos said in a statement. “As we prepare for schools to go back next term, it is a stark reminder of why teacher shortages must be addressed as a matter of urgency.”

Rebecca Zhu and The Associated Press contributed to this report.