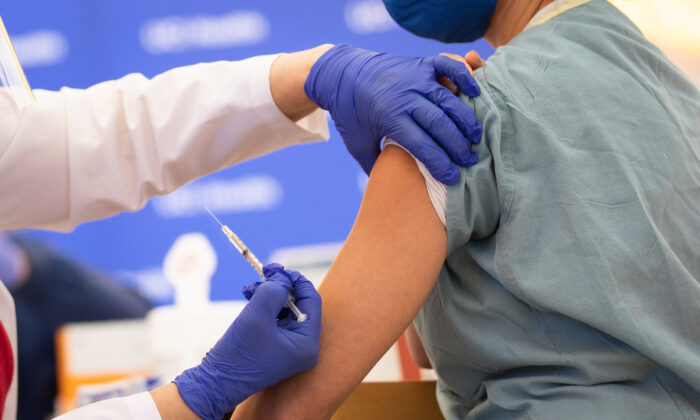 Some employers are considering adding a $20 to $50 monthly surcharge to their unvaccinated workers, according to a health benefits consultant group.

“Employers have tried encouraging employees to get vaccinated through offering incentives like paid time off and cash, but with the Delta variant driving up infections and hospitalizations throughout the country—at the same time that vaccination rates have stalled—we have received inquiries from at least 20 employers over the past few weeks who are giving consideration to adding health coverage surcharges for the unvaccinated as a way to drive up vaccination rates in their workforce,” Wade Symons, with consultancy group Mercer, told Forbes magazine on Aug. 8.

Symons didn’t disclose the names of the firms that are working to add surcharges to workers who haven’t received COVID-19 vaccines.

Several large companies, including Google, Facebook, and Walmart, as well as hospital systems and others, have mandated that their employees get vaccinated. And on Aug. 9, the Department of Defense stated that all military members will have to get the vaccine, coming more than a week after President Joe Biden announced that federal employees would have to either get the vaccine or be subject to routine testing.

Symons separately wrote in a column that some employers have held off on vaccine mandates “because of potential employee relations issues that such a move might provoke,” but he added that with the Delta COVID-19 variant and a stall in vaccinations, “health coverage surcharges for the unvaccinated are a tactic employers are reviewing as an alternative to a mandate.”

“The rationale for adding a surcharge to health insurance contributions for unvaccinated employees is seen as similar to that for a tobacco-use surcharge,” he wrote. “If an employee is unvaccinated and contracts a COVID-19 infection, that creates higher claims costs, which can impact the employer’s bottom line, and mean higher future contributions for other employees. Beyond plan costs, there are the public health benefits of greater vaccination rates, in addition to workplace safety considerations.”

And any vaccine-related surcharge, Symons noted, would have to be compliant with the landmark 1996 Health Insurance Portability and Accountability Act, or HIPAA, law.

Other than mandates from employers, some cities are considering requiring patrons at certain establishments to provide proof of vaccination via a so-called vaccine passport system.

After France announced it would use a vaccine passport system, thousands of demonstrators have taken to the streets for several consecutive weekends to rally against the government’s mandate. As of Aug. 9, police officers were seen asking customers at tables to show proof of vaccination in Paris.

The Epoch Times has contacted Mercer for additional comment.

Correction: A previous version of this article’s headline suggested that some companies are now making deductions. The error has been fixed to say that companies are “considering” the move. The Epoch Times regrets this error.