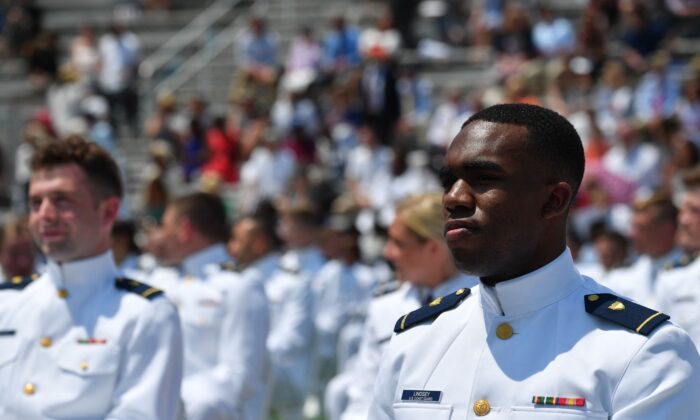 “Have the member describe how they consistently keep the tenets of their faith and demonstrate those in their daily life. Ask them to be as specific as possible,” the memo directs the chaplains to ask of exemption-seekers.

“Put the specifics acts (or lack thereof) in the memo.”

The referenced memo is a record that the chaplains are required to create of their interviews with requesters. A copy of the questions section of the memo was made available to The Epoch Times, which verified that it’s a Department of Defense product authored by “Lee, Amanda M CDR.”

“Almost none of the questions in that memo are appropriate, although some are certainly more inflammatory and offensive than others. The only obligation the service member has is to establish that they have a sincerely held religious belief that is being substantially burdened by the government,” First Liberty Institute General Counsel Mike Berry told The Epoch Times on Sept. 23.

“Once they show that, the burden shifts entirely to the government.  The government has no authority and no legitimate basis to ask the sorts of questions that are in the memo, and it demonstrates overt hostility to religious beliefs.”

The memo also warns the chaplains to be wary of Guardsmen who may be abusing the exemption process.

“It is important to provide context in the memo discussing the member’s belief. If they come to the meeting and begin by discussing concerns about safety, politics, etc., note that in the memo,” the DoD memo reads.

“Even if the member eventually states that it is a belief based on religion, note their first expression and how they moved from non-religious beliefs to religious ones. Note any comments made by the member that make it appear they are using the religious exemption as a ruse to avoid the vaccine.”

The DoD memo also includes a series of questions to be asked of Guardsmen who express concerns about the use of cells from the tissue of aborted babies in the development of the three vaccines currently approved by the FDA on an experimental basis to combat COVID-19.

Secretary of Defense Lloyd Austin, acting on orders from President Joe Biden, announced in August that all members of the U.S. military must receive the vaccine. Those who refuse the vaccine and aren’t given a religious or medical exemption are subject to discipline, not excluding discharge.

The Biden administration said on Sept. 22 that it opposes an amendment in the House version of the National Defense Authorization Act (NDAA) that specifies military members who refuse the vaccine can only receive an honorable discharge.

The honorable discharge provision “would detract from readiness and limit a commander’s options for enforcing good order and discipline when a Service member fails to obey a lawful order to receive a vaccination,” the White House Office of Management and Budget (OMB) said in a statement.

The U.S. military “must have the ability to give orders and take appropriate disciplinary measures” in order to have “a uniformed force to fight with discipline,” the OMB statement reads.

Rep. Mark Green (R-Tenn.), a medical doctor and military veteran, was the principal author of the honorable discharge amendment.

“This was a bipartisan amendment—not one Democrat on the House Armed Services Committee opposed it,” Green told The Epoch Times. “Nothing is more telling of the current political climate than the Biden administration refusing to respect the rights of our military that every House Democrat on the Committee voted for.”

Berry said his organization has been flooded with requests from members of the military who have reservations about the vaccine and who have reported experiencing a hostile work environment after making their concerns known to commanders.

“I’d estimate we’ve been contacted by somewhere between 200 and 300 service members from across the branches, of varying ranks and duty assignments, and the vast majority report experiencing significant hostility once they inform their commands they will be seeking a religious exemption from the vaccine,” he said.

“Many report to me that their commands have been very coercive and have suggested things such as ‘you can submit a religious exemption request, but the Army/Navy/Air Force/Marine Corps is not going to approve it, and then you will be processed for separation or court-martialed.’

“Others inform me that they have experienced varying degrees of adverse action as a direct result of their religious exemption requests.  These adverse actions include things such as aviators being removed from flight status and being threatened with removal from command.  All of these actions are unlawful.”

Austin “has made it clear that he expects the services to move as energetically as they can on vaccinating our service members because he is concerned about the rise in deaths and the impact that the Delta variant has had on the force,” Maj. Charlie Dietz, a DoD spokesman, told The Epoch Times on Sept. 23.

“Should a service member request a waiver, whether it be administrative or medical, the member should be treated with care and compassion,” Dietz said. “A key portion of the process is ensuring our members have access to information and resources about the vaccine, including speaking with their doctor about it. If their doctor believes that it is in the service member’s best interests to not get the vaccine, they can write an exemption for them and file it inside their medical records.

“With more than 91 percent of active duty service members having already been given one shot, we are fully confident that the number will continue to increase and are fully aware that the number of exemptions will most likely increase.”