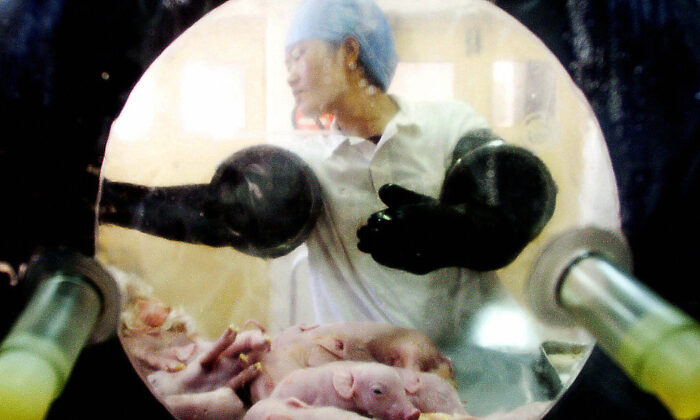 A Chinese veterinarian checks the newly-born piglets, which were removed from the womb of an experimental pig fed only with a special diet, free from any pesticides or viruses, at a laboratory in Beijing on Oct. 20, 2003. (AFP via Getty Images)
Social Issues

While forced organ harvesting of prisoners of conscience in China has drawn worldwide condemnation, the Chinese Communist Party (CCP) has been investing heavily in controversial research on using genetically modified pigs as a source of human organ transplantation, touting it as a “world first” achievement.

According to Chinese media, in 2020, gene editing-related startups in China alone received about 2 billion yuan ($310 million) in funding.

CCP mouthpiece Xinhua published a special feature on Sept. 22, 2020, saying that Chinese scientists had made another breakthrough in xenotransplantation technology in genetically edited pigs.

Xenotransplantation is a medical procedure whereby animal organs are transplanted into humans.

The paper describes how CRISPR-Cas9 knockout and transposon gene insertion technologies were used to modify a group of genetic cassettes in pigs to further enhance “the pigs’ immunological compatibility and blood-coagulation compatibility with humans.”

The paper says, “The engineered pigs exhibit normal physiology, fertility and germline transmission of the 13 genes and 42 alleles edited.”

Prior to this, there had been several technological breakthroughs in genetically modifying pigs to make their organs more suitable for human transplantation, several of which resulted from the work of Yang Luhan’s mentor at Harvard Medical School, Professor George Church.

In 2017, eGenesis announced that it had produced the world’s first genetically modified pigs that do not carry endogenous retroviruses, eliminating the risk of virus transmission from pigs to humans; and in 2018, eGenesis produced the first immunoplex-engineered pig, reducing the immune rejection of pig allogeneic organ transplants.

In addition to the above two issues, there was another technical challenge of functional compatibility: It was not yet known whether the pig organ could perform the hormonal and metabolic balance functions of the original human organ after transplantation.

After resolving these problems, the next step was to conduct a large number of clinical trials. First, pig organs would be transplanted onto monkeys; next, clinical trials would need to be done on human transplants.

However, the commercialization of pig xenotransplantation faced ethical and regulatory challenges.

Ethical and Regulatory Challenges of Xenotransplantation

From the beginning, xenotransplantation has been accompanied by ethical controversies involving the privacy of transplant recipients, allocation of resources, animal rights, distributive justice, the potential public health risk to humans due to the porcine endogenous retrovirus, and the public and religious acceptance of transplanting animal organs to humans.

The first few items can be resolved through specific improvements and strict regulation, but xenotransplantation seriously increases the risk to public health via diseases. Public acceptance of transplanting animal organs into humans varies widely given cultural and religious backgrounds.

When these challenges became too difficult to resolve, China, where ethical and legal regulations significantly lag behind technological development, provided an opportunity. Relevant researches were then moved to China to continue the work.

In 2017, Yang Luhan and Church co-founded Qihan Biotech in China, “with the mission to leverage CRISPR technology to make xenotransplantation a routine medical procedure for the delivery of safe and effective human transplantable cells, tissues and organs.”  The timing was exactly when clinical trials needed to begin—a stage where ethical review was generally more stringent than in the research phase alone.

“Technological advances are often ahead of regulation, ethical norms and public acceptance. As researchers and technology enablers, we have a responsibility to think well about these issues and share the logic of our thinking with the public,” Yang Luhan told Xinhua in 2019.

At present, the global ethical regulation of new biotechnology, such as xenotransplantation, is generally lagging behind technological development.

However, compared to China’s virtually non-existent and opaque ethical review, the corresponding legal regulations and ethical supervision in the United States are relatively strict. In areas where regulations have not yet caught up, Western research and development generally try not to touch on the more ethically controversial topics.

For example, the first clinical trial of immune AIDS gene-edited babies conducted by Chinese scientist He Jiankui’s team in 2018 was condemned by both Chinese and international surgical community upon its release—not because of his technology, but for the obvious ethical issues involved.

The 122 Chinese scientists who signed an open letter to oppose He’s research criticized the Chinese communist authorities’ ethical review of biomedical research as a “sham.”

As a matter of fact, the CCP did implement the “Ethical Review of Biomedical Research Involving Human Beings” on Dec. 1, 2016. The extensive human rights and bioethics requirements listed in it are essentially a replica of the United Nations Educational, Scientific and Cultural Organization’s Universal Declaration on Bioethics and Human Rights, which was launched in 2005.

Unlike the U.S. regulations on genetic modification, which come from the Food and Drug Administration (FDA), the CCP’s ethical biomedical review is adopted and implemented by the CCP’s National Health and Family Planning Commission—the same agency that has killed hundreds of millions of unborn babies in China over the past 40 years through its controversial one-child policy.

On Dec. 15, 2020, the FDA approved GalSafe Pigs, which are genetically modified to remove alpha-gal sugar, for use in medical drugs, organ and body tissue transplants, and food.

However, the FDA also emphasized, “It’s important to note that these pigs have not been evaluated for use as xenotransplantation products for transplantation or implantation into human subjects. Developers of any such human medical products must first submit an application to, and obtain approval from, the FDA before these products can be used in human medicine.”

This site covers a total area of about 6.67 hectares. The first phase of about 0.7 hectares has been completed, including the various functional areas of pig breeding and operating rooms, laboratories, etc. “It is a high standard test base for pigs for medical purposes, as well as an organ factory,” according to a report by Sichuan Daily published on Sept. 15, 2020.

Currently this base has more than 200 pigs with more than 10 kinds of genetic modifications.

“A few days ago, a batch of pigs for medical purposes was shipped from the base to a certain hospital of the Chinese Academy of Medical Sciences to be used for heart transplant research,” the report stated.

Pan Dengke, the founder of Clonorgan Biotechnology, said that this kind of scale and factory production of genetically modified pigs could ensure sufficient supply for xenotransplantation, and the price is cheaper than human organs.

In 2019, Pan’s team transplanted the kidneys of genetically engineered pigs into rhesus monkeys and kept the monkeys alive for 32 days while using human clinical immunosuppressants. Pan said this had set a global record for the longest survival of an allogeneic kidney transplant under the same conditions.

According to Pan, pigs were chosen as the source of human organ transplants instead of monkeys because pigs’ organs are similar in size and function to those of humans, and pigs have a short breeding cycle and high reproduction rate.

Another reason is that compared to more intelligent monkeys and orangutans, pigs have fewer ethical issues with regard to animal rights, and there are no endangered animal protection issues, etc. Chinese people, whose main meat is pork, are more tolerant of the killing of pigs and using pigs’ organs than people in Western countries.

However, Pan may have overlooked the fact that traditional Chinese culture has a lot to say spiritually about the spirituality of human beings, and that what a transplanted heart can bring to a human being may not be as simple as a virus.

Despite the numerous controversies surrounding xenotransplantation, the CCP has shown strong support.

For example, in addition to the financial support and the publicity of CCP media, Yang Luhan was selected as one of the World Economic Forum’s 2017 Young Global Leaders in March 2017, and was added to Fortune’s “China’s Most Influential Women in Business 2020 (Future List),” with her title listed as co-founder and chief scientific officer of eGenesis.

Qihan Biotech in Hanzhou is a sister company of eGenesis. On March 29, 2021, the company raised an additional $67 million in Series A++ financing with the participation of its strategic investors including Lilly Asia Ventures and Matrix Partners China, as well as its existing shareholders Sequoia Capital and China Merchants Bank International. The cumulative Series A financing has exceeded $100 million.