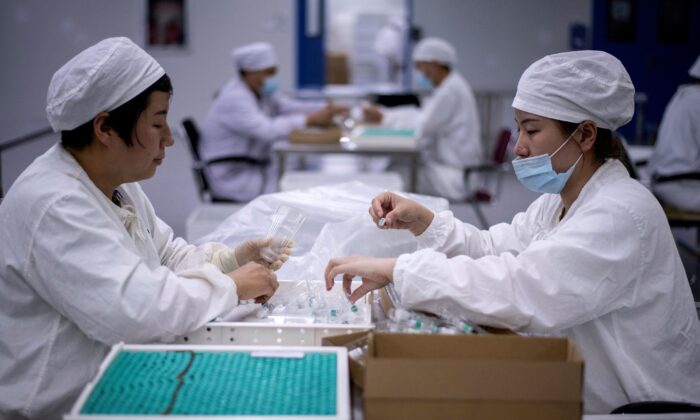 Workers package rabies vaccine at a lab where researchers are trying to develop a vaccine for the COVID-19 coronavirus, in Shenyang, in China's northeast Liaoning province, on June 9, 2020. (Noel Celis/AFP via Getty Images)
INSIDE CHINA

As the Chinese regime races to inoculate tens of millions through coercive policies and a propaganda blitz, some local officials are quietly dodging the shots themselves.

Amid Beijing’s aggressive vaccine push, dozens of officials from parts of Liaoning, a province in northeastern China, have cited various health reasons not to take the Chinese COVID-19 vaccine, internal documents dated late March and obtained by The Epoch Times reveal.

In a town called Xintai, located in the center of the province, only three out of 66 officials have gotten vaccinated, with another two on the registration list—showing a dismal willingness rate of less than 10 percent.

Fifty government officers and those with the local judicial office and law enforcement gave reasons such as underlying illness, allergy, pregnancy, recent surgery, or a cold, according to a March 29 chart that summarizes the region’s vaccination efforts.

Allergy stood out as the top reason, cited 22 times. Twenty people also cited high blood pressure while five mentioned diabetes—even though both are chronic diseases that would mark them as highly vulnerable to the CCP (Chinese Communist Party) virus.

In Tai’an County, which has jurisdiction over the town, only four people in the 56-member Housing and Urban-Rural Development Bureau consented to being inoculated, with three people excusing themselves over “poor health.” In the county’s political and legal affairs committee, a well-funded CCP organ that has direct oversight over the court system, one person mentioned toothache. In Tai’an’s fiscal service center, some said they’re taking Chinese medicine or have unspecified illnesses.

The vaccination acceptance is no more sanguine in the Tai’an Occupation Education Center, the county’s major technical college, where around a third claimed to have an allergic constitution and many said they were recovering from the seasonal flu.

The low participation rate from the officials, who have been tasked with “leading by example” in China’s latest vaccination drive, appears to signal a greater lack of enthusiasm within the country.

The regime has been promoting its homegrown vaccines at home and abroad, shipping free doses to 69 countries and celebrating a record of 100 million administered across China by the end of March. Gao Fu, head of the country’s Center for Disease Control and Prevention, recently told state media they were aiming to vaccinate 70 to 80 percent of the Chinese population to achieve herd immunity.

Yet achieving the vaccination record has taken the mobilization of communist party cadres countrywide. In some cases, overzealous officials have gone door to door to vaccinate residents and even threatened to blacklist the uncooperative.

The campaign has meanwhile been riddled with questions about vaccine quality.

Still very little is known about the Chinese vaccines the regime has rushed to distribute. The leading vaccine maker, state-owned Sinopharm, announced plans on March 28 to conduct third stage trials overseas to observe how long protection from the virus would last. In Hong Kong, at least 12 locals have died following Beijing’s Sinovac shots, although authorities said the vaccine was not the direct cause for their deaths.

Neither company has made its clinical data public, although the World Health Organization on March 31 vouched for efficacy levels being above 50 percent—the minimum bar for a vaccine’s public use.

“We know nothing about this vaccine,” a mainlander surnamed Li told the Chinese-language NTD, an affiliate of The Epoch Times. “There’s no third stage trial data nor analysis on whether it can produce antibodies at all, whether we can still get infected or infect others. We know nothing.

“We are better off simply having a few bowls of chicken soup at home to boost our immunity, don’t you think?”

Amid public skepticism, the regime has been drumming up the pressure. State media anchors have endorsed vaccination slogans urging people to “lend an arm.”

In southern Hainan Province, a local town called Wancheng told residents they wouldn’t be able to take buses or go to restaurants and supermarkets without vaccination certificates.

“If you don’t take vaccines, it will affect your children’s schooling, work, joining the military, and housing in the future,” according to a notice that has since gone viral on Chinese social media. The officials later apologized amid the backlash and rescinded the mandate.

Mr. Wu from China’s central city of Wuhan recently received a text from his local neighborhood committee and his workplace telling him to get the vaccine on a certain date.

Both he and his father, a government official, consider it unnecessary, he said, citing a history of issues with past Chinese vaccines.

“The Chinese Communist Party seems pretty anxious about people’s lack of interest in getting the vaccines,” he said in a recent interview. “A lot of people seemingly support the Party and hate America during normal times, but if you were to ask them to take domestic vaccines no one would agree.”

“A lot of common people are worried about this, and so am I,” he told The Epoch Times in a recent interview.