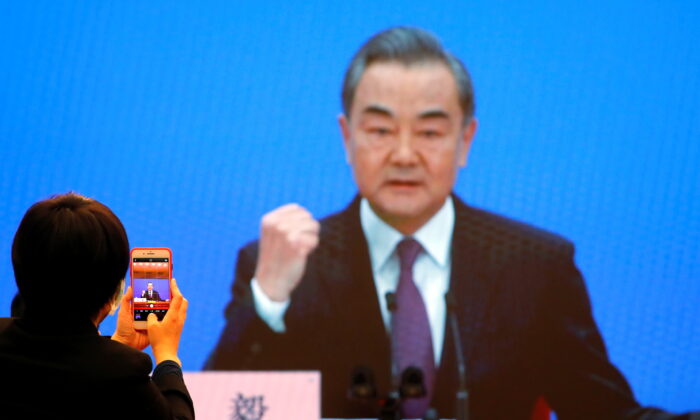 Chinese State Councillor and Foreign Minister Wang Yi is displayed on a screen as he attends via video link a news conference on the sidelines of the National People's Congress (NPC), in Beijing, China on March 7. (Reuters/Thomas Peter)
International Relations

By Frank Fang and Cathy He
biggersmaller
Print

From France to Venezuela to the United States, the Chinese communist regime’s diplomats have been busy this past year blustering, threatening, and denigrating their host countries as part of an all-out effort to advance Beijing’s agenda on the world stage.

This aggressive style, dubbed “wolf warrior” diplomacy, was on full display in March during the first face-to-face meeting between Biden administration officials and Chinese Communist Party (CCP) diplomats in Alaska. In a widely publicized blow-up, Chinese diplomats responded to U.S. criticism of the CCP’s aggressions domestically and abroad by launching into an extended tirade accusing the United States of similar infractions.

Yang Jiechi, the top CCP official in charge of foreign affairs, broke protocol by taking up more than 15 minutes for opening remarks (the agreed-upon time was two minutes), during which he lambasted the United States over what he described as its struggling democracy, poor human rights record, and unfair foreign and trade policies.

After both Secretary of State Antony Blinken and White House national security adviser Jake Sullivan responded in defense of the United States, Yang retorted: “Well, it was my bad. When I entered this room, I should have reminded the U.S. side of paying attention to its tone in our respective opening remarks, but I didn’t.”

He then accused the U.S. side of speaking in a “condescending way,” and breaking diplomatic protocols. “So let me say here that, in front of the Chinese side, the United States does not have the qualification to say that it wants to speak to China from a position of strength,” Yang added.

Chinese state media made hay of the clash, spinning the event as a win for the Chinese diplomats, who exuded “confident body language” in contrast with the “closed off” gestures of their U.S. counterparts.

But the display was not only for domestic consumption. Emboldened by the regime’s purported success in weathering the pandemic compared to other nations, the CCP has recently been pushing the narrative of “the East is rising while the West is declining”—and its diplomats’ behavior is embodying that message on the international stage.

“The wolf warriors personify the desire to present the PRC [People’s Republic of China] as a powerful country that can set the rules for world order,” June Teufel Dreyer, professor of political science at the University of Miami told The Epoch Times in an email.

Dreyer described the confrontational approach as an intensification of a trend that could be observed as early as 2010, when Yang had a similar outburst at an ASEAN regional security meeting in Hanoi, Vietnam. Fuming at 12 countries who raised their concerns over Beijing’s growing assertiveness in the disputed South China Sea, Yang fired back, “China is a big country and other countries are small countries and that is just a fact,” while staring at the foreign minister of tiny Singapore.

Rise of the ‘Wolf Warrior’

The CCP’s wolf warrior diplomacy came into full force during the pandemic last year, as Beijing moved to aggressively fend off international criticism of its cover-up of the CCP virus outbreak. Since then, foreign criticism of the CCP’s actions, from its human rights abuses in Xinjiang to its military aggression in the South China Sea, has routinely drawn fiery responses from officials on Twitter and other forums.

The descriptor is named after two hit jingoistic Chinese movies of the “Wolf Warrior” franchise, released in 2015 and 2017. The movies centered around a Chinese special forces soldier fighting foreign mercenaries at China’s southern border and Africa.

In a now-infamous tweet, Chinese foreign ministry spokesperson Zhao Lijian last March accused the U.S. Army of bringing the virus to Wuhan when participating in a military sports event in October 2019, prompting a firestorm of criticism from the United States and Western democracies. The baseless accusation marked the start of Beijing’s ongoing campaign to spread virus origin disinformation to deflect attention away from its mishandling of the outbreak and shun scrutiny on the possibility that it leaked from a Wuhan lab.

Also in March, the Chinese Embassy in Caracas slammed unnamed Venezuelan officials for calling the virus the “China” or “Wuhan” virus by telling them to “put on masks and shut up.”

Zhao struck again in November, drawing fury from Australia for tweeting a photoshopped image of an Australian soldier holding a bloodied knife to the throat of a young child. The image was a reference to a report that found some Australian special forces soldiers unlawfully killed civilians in Afghanistan during a mission there. The tweet came amid heightened tensions between the two countries after Australia called for an independent investigation into the origins of the virus. Beijing responded with economic coercion—by slapping import restrictions on a range of Australian goods including beef, coal, barley, and wine.

The brawly style is a direction set straight from CCP leader Xi Jinping, Anders Corr, publisher of the Journal of Political Risk and founder of Corr Analytics, told The Epoch Times.

“[Xi] wants an aggressive diplomacy to try and scare the U.S., Japan, Taiwan, and their allies into territorial and trade concessions,” Corr said in an email. “He believes that might makes right, and therefore a strong China should be duly accommodated.”

When countries push back against Beijing’s assertiveness, Xi doubles down by “direct[ing] his diplomats to increase the volume, intensity, and even anger of their diplomacy,” Corr said.

It was unclear when the term “wolf warrior” was first used to describe CCP diplomats or diplomatic tactics, but two Taiwanese media used it around October 2018 to describe the regime’s diplomatic responses after Chinese tourists were removed from a hotel in Sweden by local police and a subsequent satirical talk show in the country criticized Chinese tourists in general.

In response to these incidents, the Chinese Embassy in Sweden issued a statement claiming that Sweden was not safe for Chinese tourists to travel to. Diba Central Army, a popular Chinese social media platform known for allegiance to the CCP, also called on its users to “bombard the Facebook pages of the Swedish Ministry for Foreign Affairs” and the talk show’s host, according to China’s hawkish state-run outlet Global Times.

Following the 2018 incident, BBC Chinese used the term to describe a July 2019 heated Twitter exchange between Chinese foreign ministry’s spokesperson Zhao Lijian and former U.S. National Security Adviser Susan Rice, in which Zhao made racist comments about black and white populations in Washington. The term was later picked up by the Global Times and gained traction during the pandemic as a way to describe the CCP’s bare-knuckled responses to rising global criticism over a range of issues.

The concept underlying “wolf warrior,” however, finds its roots in Maoist thought, going to the heart of the CCP’s ideology. Then-CCP leader Mao Zedong, Chinese media reported, told the regime’s first diplomats, “Diplomatic work is a political struggle. You don’t fight using weapons, you fight with your pen and mouth,” in a statement chiming with the Party’s expansive doctrine of political warfare. The strategy calls for using all tactics short of full-on military assaults to defeat an enemy.

Having “wolf nature” is equivalent to having a “Party nature,” that is, the quality possessed by people who have absolute loyalty to the CCP, the municipal government in Nantong, a city in coastal China’s Jiangsu Province, said on its website, reposting a 2020 article from a local newspaper.

Outside of people, the concept has also been used to describe institutional cultures. A 2006 social science paper analyzed how corporate “wolf culture” existed at China’s telecom giant Huawei and computer maker Lenovo. Former employees at Huawei previously told The Epoch Times that the company zealously promoted “wolf culture,” a philosophy advocated by founder Ren Zhengfei, who drew from his background with the Chinese military.

CCP officials have publicly endorsed this style. Last May, Liu Xiaoming, who was the Chinese ambassador to the UK at the time, told China’s state-run broadcaster CCTV that Chinese diplomats should act like “wolf warriors.”

“So I encourage diplomats at all levels of the [Chinese] embassies to take on the fight proactively” whenever they see a “wolf.”

Months later, in a daily briefing in December, China’s foreign ministry spokesperson Hua Chunying said she didn’t “see any problem in living with that ‘wolf-warrior’ title.”

Beijing also claims it has the support of the people to engage in such a form of diplomacy. In December, Global Times reported that 71.2 percent said Beijing should adopt “wolf warrior” diplomacy, in a recent survey of 1,945 people in 16 Chinese cities.

Ultimately, however, the CCP’s methods have been backfiring, according to Corr.

“Other countries quickly recognize it for what it is, are repulsed by its crudeness, and respond through closer economic and military coordination and alliance-building,” he said.

For Dreyer, the United States and other countries should send a clear message that the regime’s behavior is not acceptable.

“Countries must counter Chinese aggression by refusing to accept its territorial claims, by being vigilant against its united front tactics, by calling out its soft power and sharp power tactics,” she said.