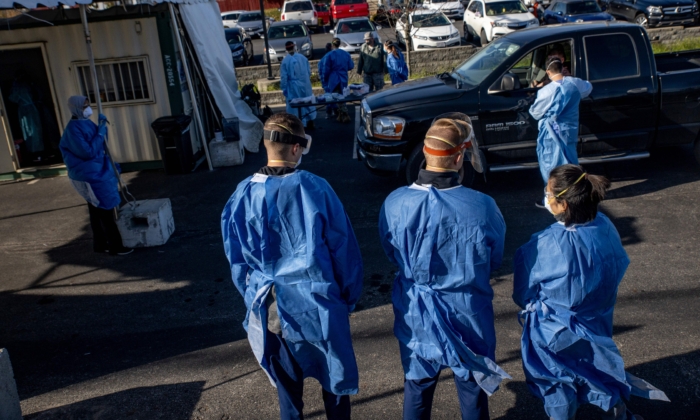 Health care workers administer free COVID-19 tests to people in their cars in the parking lot of the Columbus West Family Health and Wellness Center in Columbus, Ohio on Nov. 19, 2020. (Stephen Zenner/AFP via Getty Images)
AMERICA

The U.S. Centers for Disease Control and Prevention (CDC) issued an alert to health care workers across the United States to prepare for a potential surge of COVID-19 infections due to the high transmissibility of the Omicron variant.

The alert is designed as an update to “recommendations to enhance protection for healthcare personnel, patients, and visitors, and ensure adequate staffing in healthcare facilities,” the alert said, which added that the CDC’s contingency options include shortening the amount of time health care workers need to quarantine following a COVID-19 infection.

“Under conventional conditions, healthcare facilities can allow asymptomatic healthcare personnel with SARS-CoV-2 infection, regardless of vaccination status, to return to work after seven days and a negative test in accordance with CDC guidance,” said the alert, referring to another name for the CCP (Chinese Communist Party) virus.

But under “crisis” conditions, health care workers can return to work after five days as a last resort without any testing as long as they remain asymptomatic. Those health care workers should wear a respirator or well-fitting face mask while on the job, the agency said.

Certain circumstances need to be factored into any decision on whether to allow a COVID-19-positive health care employee back to work, the CDC said.

“This includes healthcare personnel who are moderately to severely immunocompromised,” the CDC said. “Also, in the event of ongoing transmission within a facility that is not controlled with initial interventions, strong consideration should be given to using more stringent work restriction for healthcare personnel with higher-risk exposures.”

A recent study released by the Imperial College London found that Omicron patients were 20- to 25-percent less likely to need hospital care and 40- to 45-percent less likely to be hospitalized for at least one night, as compared to Delta variant cases. They estimated that natural immunity, or protection from a prior infection, reduces the risk of hospitalization by upwards of 50 percent and the risk of staying at the hospital for a night or more by about 61 percent.

A similar sentiment was made by White House COVID-19 advisor Anthony Fauci, who has courted controversy with statements he’s made about the U.S.’s involvement in funding research at a lab in the Chinese city of Wuhan, on Sunday morning during an ABC News interview.