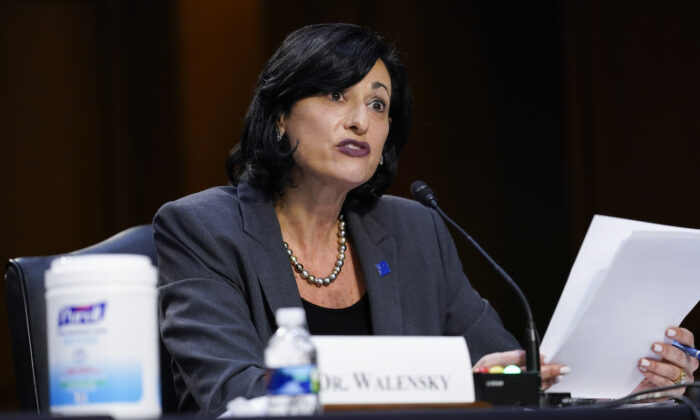 Rochelle Walensky, director of the Centers for Disease Control and Prevention testifies during a Senate hearing on the federal COVID-19 response on Capitol Hill in Washington, on March 18, 2021. (Susan Walsh/Pool/Getty Images)
Executive Branch

CDC Director: Definition of ‘Fully Vaccinated’ May Change in the Future

The director of the Centers for Disease Control and Prevention (CDC) on Friday suggested that the definition of what constitutes being “fully vaccinated” may change as boosters become more commonplace, echoing a move handed down several weeks ago by Israeli officials.

For now, in order to meet the CDC’s criteria for being “fully vaccinated,” one has to have two shots of either the Moderna or Pfizer COVID-19 vaccine, or one dose of Johnson & Johnson’s.

“If you’re eligible for a booster, go ahead and get your booster and we will continue to follow,” she added. Walensky did not offer a timeline or other details about a possible change.

Walensky’s comments Friday represent a reversal of a previous position she took during a COVID-19 briefing. In late September, she said that federal health officials are not considering changing the definition of “fully vaccinated” for the time being.

It comes after the CDC recently expanded the eligibility for booster doses, approving them for individuals who have received Pfizer or Moderna shots if they are either aged 65 and older or aged 18 and older in long-term care settings. The agency also ruled that anyone who is 18 and older who got the J&J vaccine can get a booster shot two months later.

In recent weeks, health officials in countries like Australia have publicly toyed with the idea of continuous booster shots as a prerequisite for employment or having a valid vaccine passport.

“We’re going to be getting into booster issues, so it won’t be your first or second dose, it’ll be, ‘have you had, have you had, your third?'” Victorian Premier Daniel Andrews said during a recent news conference. “And then the other issue will be, well who knows what variants are coming?”

But Israel in early September became likely the first nation to say the country’s so-called “green passes,” or a type of vaccine passport,  would expire six months after the second dose of the Pfizer vaccine. Authorities in Bahrain followed suit, saying that those who are eligible for booster shots but don’t get them risk losing their vaccination status.

Both in Israel and Bahrain, vaccine passports are required to enter many venues such as restaurants, theaters, and bars. Several European countries including France and Italy have implemented similar measures nationwide.

Walensky on Friday also again called for people who haven’t got the COVID-19 vaccine to get vaccinated but stipulated that “no vaccine—even a boosted vaccine—provides 100 percent protection.”

Recent CDC data, meanwhile, shows that more Americans are getting booster shots than getting their first COVID-19 vaccination shot.