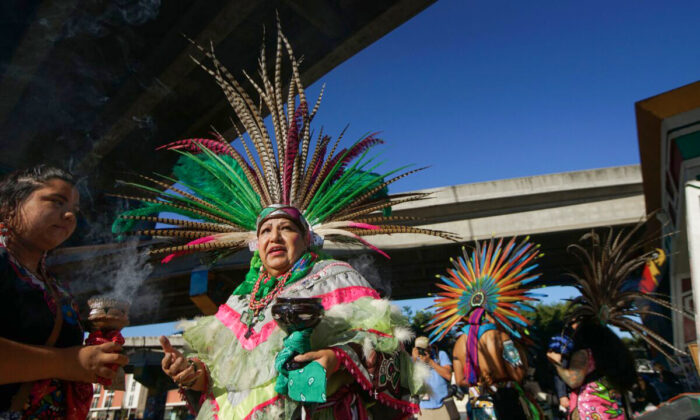 Parents in California and a civil rights group are suing the state over its imposition earlier this year of a novel public school curriculum that reportedly has students praying to Aztec gods.

“The curriculum’s unequivocal promotion of five Aztec gods or deities through repetitive chanting and affirmation of their symbolic principles constitutes an unlawful government preference toward a particular religious practice,” Frank Xu, president of Californians for Equal Rights Foundation, said in a statement.

Paul Jonna, a partner at LiMandri & Jonna LLP and Thomas More Society special counsel said in a statement: “The Aztecs regularly performed gruesome and horrific acts for the sole purpose of pacifying and appeasing the very beings that the prayers from the curriculum invoke.

“The human sacrifice, cutting out of human hearts, flaying of victims and wearing their skin, are a matter of historical record, along with sacrifices of war prisoners, and other repulsive acts and ceremonies the Aztecs conducted to honor their deities.

“Any form of prayer and glorification of these bloodthirsty beings in whose name horrible atrocities were performed is repulsive to any reasonably informed observer.”

The case, Californians for Equal Rights Foundation v. State of California, was filed Sept. 3 in the Superior Court of California, County of San Diego, by attorneys from the Thomas More Society, a national public interest law firm.

Californians for Equal Rights Foundation is a nonprofit civil rights organization headquartered in San Diego. It was founded after the defeat of Proposition 16 in 2020, which if passed, according to Ballotpedia, would have repealed the 1996 Proposition 209. Prop 209 provided that government and public institutions may not discriminate against or grant preferential treatment to persons on the basis of race, sex, color, ethnicity, or national origin in public employment, public education, and public contracting.

The other plaintiffs are Eric Gonzales, Steve Houbeck, and Jose Velazquez, all of whom are parents who now have or had children enrolled in public schools in California, according to the legal complaint.

The legal complaint details the California State Board of Education’s approved Ethnic Studies Model Curriculum (ESMC), which includes a section on “Affirmation, Chants, and Energizers.” Among these is the “In Lak Ech Affirmation,” which invokes five Aztec deities. This chant addresses the deities both by name and traditional titles, recognizes them as sources of power and knowledge, invokes their assistance, and gives them thanks.

The chant invokes the names of five beings worshiped by the Aztecs as gods or demi-gods, specifically Tezkatlipoka, Quetzalcoatl, Huitzilopochtli, Xipe Totek, and Hunab Ku.

According to the legal complaint, the state Board of Education appointed R. Tolteka Cuauhtin, a co-author of the 2019 book “Rethinking Ethnic Studies,” to chair a committee tasked with developing an ESMC. In his book, Cuauhtin “demonstrates an animus towards Christianity and Catholicism—claiming that Christians committed ‘theocide’ (i.e., killing gods) against indigenous tribes.”

In March, the Board of Education approved the ESMC.

The curriculum also includes the “Ashe Affirmation,” which “invokes the divine forces of the Yoruba religion four times—honoring this divine force and seeking assistance for the school day,” the complaint states. Yoruba is “an ancient philosophical concept that is the root of many pagan religions, including Santeria and Haitian vodou or voodoo,” according to the Thomas More Society. It reportedly has 100 million believers worldwide in West Africa, Brazil, Colombia, Cuba, Puerto Rico, Guyana, and in Caribbean nations.

“Our clients have both a religious and civic objection to the Aztec prayer, and they do not want their children chanting it, being asked or pressured to do so, or risking ostracism if they refuse,” Jonna added.

“Under both the California and United States Constitutions, they have the right to expect all branches of the state government, including the State Board of Education and the Department of Education, to respect this choice. Furthermore, all Californians have the right to expect that tax-supported public schools will not aid or promote this religion.”

California Attorney General Rob Bonta, a Democrat, couldn’t be reached for comment over the holiday weekend.