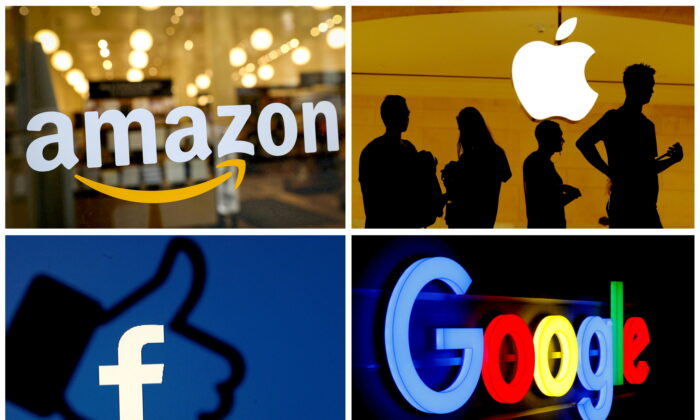 The logos of Amazon, Apple, Facebook, and Google in a combination photo. (Reuters)
Congress

Two senators have introduced bipartisan legislation that would make it harder for online tech giants to make acquisitions that “harm competition and eliminate consumer choice,” according to the office of Sen. Amy Klobuchar (D-Minn.), one of the bill’s co-sponsors.

Klobuchar and Sen. Tom Cotton (R-Ark.) on Nov. 5 jointly announced the Platform Competition and Opportunity Act, which would make it easier for the government to block deals it believes violate antitrust laws by requiring companies that have dominant market positions to prove that mergers don’t stifle competition.

“We’re increasingly seeing companies choose to buy their rivals rather than compete,” Klobuchar said in a statement.

“This bipartisan legislation will put an end to those anticompetitive acquisitions by making it more difficult for dominant digital platforms to eliminate their competitors and enhance the platform’s market power.”

Klobuchar and Cotton’s proposed bill would shift the burden in merger enforcement to dominant platforms to prove that the merger isn’t anticompetitive.

“Big tech firms have bought up rivals to crush their competition, expand their monopolistic market share, and to harm working Americans. That’s bad for America,” Cotton said in a statement.

“Under this bill, the largest tech monopolies will have the burden of proving that further acquisitions are lawful and good for the American people.”

In October, Klobuchar joined Sen. Chuck Grassley (R-Iowa) and others to introduce a measure that would bar big tech platforms from unfairly favoring their products and services. Called the American Innovation and Choice Online Act, the bill seeks to bolster online competition and prevent dominant platforms from abusing their market power in anticompetitive ways.

“Big Tech needs to be held accountable if they behave in a discriminatory manner,” Grassley said in a statement. “Our bill will help create a more even playing field and ensure that small businesses are able to compete with these platforms.”

A coalition of policy nonprofit organizations that opposes the American Innovation and Choice Online Act signed an open letter (pdf) on Oct. 28, saying that “the big government regulations included in this bill would empower enforcers to weaponize antitrust laws and punish American companies for providing products and services that consumers widely enjoy.”

Other legislation has been introduced seeking to rein in the outsized market power of tech firms. So far, none has become law, although one, which would increase resources for antitrust enforcers, was approved by the Senate.