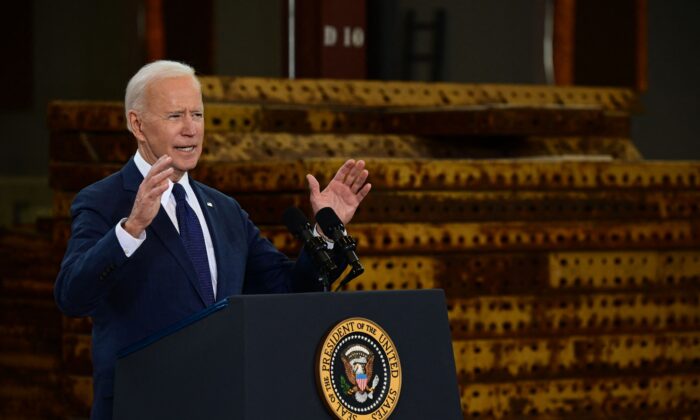 In a speech in Pittsburgh, President Joe Biden unveiled his $2 trillion infrastructure plan, consisting of traditional projects such as roads and bridges as well as funding to combat climate change and money for the care economy, a service industry.

What will pay for it all? Corporate tax increases.

“Today, I’m proposing a plan for the nation that rewards work, not just rewards wealth,” Biden said on March 31. “It builds a fair economy. … It’s going to create the strongest most resilient, innovative economy in the world. It’s not a plan that tinkers around the edges.”

Biden described his proposal, which he dubbed the “American Jobs Plan,” as “a once-in-a-generation investment in America, unlike anything we’ve seen or done since we built the interstate highway system and the space race decades ago.”

He said the heart of the plan is modernizing transportation infrastructure.

Biden’s wide-ranging proposal, the details of which were laid out in a fact sheet released by the White House on March 31, is the first part of a two-part economic plan he aims to pass through Congress in the coming months. The second part of his plan features even more ideals outside of the traditional infrastructure scope, such as expanding health insurance coverage, extending the expanded child tax benefit, and more.

“It will create millions of jobs, grow the economy, make us more competitive around the world … and put us in a position to win the global competition with China in the upcoming years,” the president said. “It has two parts: the American Jobs Plan and the American Families Plan. Both are essential to our economic future.”

According to the White House, the $2 trillion plan will be paid for by increasing the corporate tax rate to 28 percent from the current 21 percent. A senior administration official told reporters earlier March 31 that the infrastructure plan wouldn’t include increases in the top marginal tax rate or to the capital gains tax.

Some of the areas Biden’s plan includes are $621 billion for transportation infrastructure, $400 billion toward “expanding access to quality, affordable home- or community-based care for aging relatives and people with disabilities,” the modernization of 20,000 miles of highways and roads, $300 billion for boosting manufacturing supply chains, and building 500,000 electric vehicle chargers.

There are many mentions of fighting climate change in the fact sheet. Biden’s plan includes calling on Congress to invest $35 billion “to achieve technology breakthroughs that address the climate crisis,” and projects such as the creation of a new national lab focused on climate that will be affiliated with historically black colleges and universities.

The combined two-part package is expected to cost between $3 trillion and $4 trillion over the course of a decade, unnamed sources involved in the discussions told The Wall Street Journal.

“Biden’s proposal could mean an over $2 trillion tax increase on businesses of all sizes, hurting America’s poor and working families most. These tax hikes mean lower wages and higher prices for Americans,” Matthew Dickerson, director of The Heritage Foundation’s Grover M. Hermann Center for the Federal Budget, said in a statement.

Economic experts recently told The Epoch Times that Biden’s infrastructure plan amounts to a massive federal power grab, potentially the largest in decades. They largely criticized the expansion of the definition of infrastructure as well.

Former President Donald Trump, in a statement on March 31, called the plan “among the largest self-inflicted economic wounds in history.”

“If this monstrosity is allowed to pass, the result will be more Americans out of work, more families shattered, more factories abandoned, more industries wrecked, and more Main Streets boarded up and closed down—just like it was before I took over the presidency 4 years ago,” Trump said, adding that the plan will “implement the largest tax hike in American history.”

“Unfortunately, much of the Biden plan ignores ABC’s infrastructure policy recommendations, while proposing tax increases on job-creating construction firms that are still recovering from the effects of the COVID-19 pandemic,” Bellaman said in a March 31 statement.

During a press gaggle earlier in the day with White House deputy press secretary Karine Jean-Pierre, a reporter asked if the infrastructure was split into two parts because the administration was less confident about the second part.

“There’s multiple pillars. And one is not more important than the other,” Jean-Pierre responded, according to pool reports. “No one is more equal or better than the other. In a couple weeks, [the president] will talk about the second part of this one.”