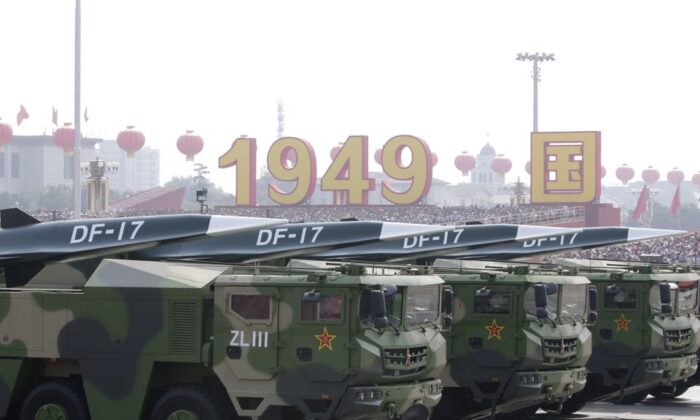 Back to the Future, the Chinese Lead the Re-birth of Hypersonic Missiles

In a dramatic turn of events, while General Milley is concerned with understanding white rage, the Chinese conduct a startling test of a hypersonic missile.

This missile, with a more technical name of a Hypersonic Glide Vehicle (HGV) is boosted to low earth orbit and then conducts a hypersonic flight around the world, dipping into the atmosphere and then skimming back up into low space before diving down at its target. The HGV approach offers unique attributes that makes it a desired capability in the strategic weapons quiver.

Legacy intercontinental ballistic missiles have a higher, more predictable arc through space which makes shooting them down a relatively easier math and operational problem set. HGVs are harder to track, detect, and engage.

They also proffer the capability for multiple bomb drops (Fractional Orbital Bombardment—FOB) before they finish their flight. This is not a new missile or capability; this is a re-discovering of the lost arts of the missile duel of the Cold War between the United States and the Soviet Union.

A forgotten part of Cold War History is the Boeing X-20 DynaSoar (Dynamic Soaring Vehicle). The X-20 is still shrouded in semi-secrecy (it has been substantively de-classified) and perhaps intentional obfuscation.

It has been described as a research vehicle, orbital bomber, reconnaissance craft, maintenance cart, and a re-supply vehicle to the emerging “Air Force” Manned Orbiting Laboratory (MOL) which is another mystery-shrouded program in itself.

These two efforts were really led by the CIA, back during a time when the CIA pushed the envelope to protect America instead of working to topple a president.

The X-20 was big, it was bold, it personified the boundless vision of the Kennedy administration, and it was an incredible leap forward in technologies. It doubled down U.S. strategic superiority over the Soviets. Yet the X-20 is most often referenced as a “failed” program. It is a forgotten asterisk in Cold War history.

Not so fast, I would assert the X-20 was as much an information operation as it was a revolutionary HGV. It did represent an advanced operational capability which would have given the United States a decisive advantage over the Soviets. It freaked out the Soviets who were beside themselves in trying to match this capability.

It essentially stared down the Soviets into signing the Space Treaty in 1967, which limited HGVs, FOBs (fractional orbital bombardment system), and so on. The Space Treaty ostensibly, de-militarized space. Mission accomplished—the Soviets signed the treaty, and the X-20 was no longer needed.

China is a signatory nation of the Space Treaty, as is the country of Taiwan. But with the flight of the Chinese HGV and the obvious next logical step of arming the HG-17 with a warhead (or warheads), the effectiveness and enforceability of the Space Treaty is in question.

Yes, perhaps the Chinese HGV missed its target by roughly 20 miles, but that can be refined. And when asked by reporters about the Chinese HGV test, the White House press secretary gave the incredulous response of welcoming, “stiff competition” from the Chinese. What planet are we on? A more re-assuring statement of American resolve to deter and defeat these capabilities is in order.

At this point, it is a statement of the obvious that the agonizing contortions of the Biden administration public policy statements are so overwrought as to be nothing but a signal to “Strategic Competitors” that the Administration is intellectually brilliant, but incapable of articulating the simple concept of resolve and deterrence, much less a tangible statement on anything.

This is a failure of not only the Administration but the entire national security apparatus of the swamp that has become gargantuan, overfed, and glacial in its ability to pivot to the threat.

Dwight D. Eisenhower warned us of the “Military-Industrial” complex (which includes the Intelligence Community). He was right, it is here, it is the Swamp and Biden is President of the Swamp, not the American people.

The Chinese just demonstrated a capability and sent us a strategic signal—they intend to defeat our missile defense systems and destroy American cities. Missing by 20 miles is irrelevant if you place a five megaton (MT) warhead on the HGV. That is a big warhead in power, but small in the physical size on the HGV.

I’m a positive person who feels we’ll win this struggle with the Chinese regime, but realistically, the American “Military-Industrial” complex is currently out of position and in an improper stance.

A National Training Center-Pacific would manifest this American resolve in the Indo-Pacific Theater while American and Strategic Partner forces train to deter the CCP. The Army, Navy, Air Force, Marines, Space Force (and Coast Guard) need to pivot fast and dispense with the drag co-efficient of Critical Race Theory and forced vaccinations.

In my almost 40 years of service, I’ve had to pivot from conventional to special operations to cyber. The American national security apparatus found themselves out of position with the Soviet Sputnik in 1957, but rapidly re-focused and within a few years produced the X-20 and many other strategic systems which intimidated and deterred the Soviets. With the right president, we can do this again.