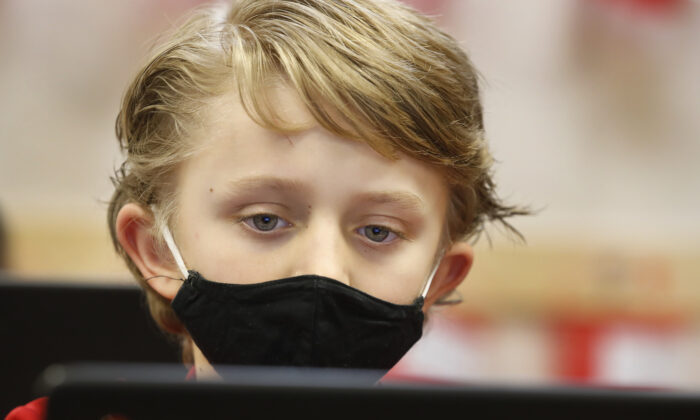 A student wears a mask as he does his work at Freedom Preparatory Academy in Provo, Utah, on Feb. 10, 2021. (George Frey/Getty Images)
PUBLIC HEALTH INFORMATION

The research note titled “Experimental Assessment of Carbon Dioxide Content in Inhaled Air With or Without Face Masks in Healthy Children: A Randomized Clinical Trial,” authored by Harald Walach and colleagues, was published in June. Based on measurements of carbon dioxide in air inhaled by 45 children between 6 and 17 years of age, the study found that children wearing face masks were inhaling carbon dioxide levels “deemed unacceptable by the German Federal Environmental Office by a factor of 6.” The researchers concluded that their findings “suggest that children should not be forced to wear face masks.”

JAMA Pediatrics retracted the research letter on July 16. In a retraction notice, Dr. Dmitri Christakis and Dr. Phil Fontanarosa cited “numerous scientific issues” raised about the study methodology, including concerns about whether the proper device was used to measure carbon dioxide levels and if the measurements were an accurate reflection of carbon dioxide levels in inhaled air, along with “issues related to the validity of the study conclusions.”

“In their invited responses to these and other concerns, the authors did not provide sufficiently convincing evidence to resolve these issues, as determined by editorial evaluation and additional scientific review,” Christakis and Fontanarosa wrote.

“Given fundamental concerns about the study methodology, uncertainty regarding the validity of the findings and conclusions, and the potential public health implications, the editors have retracted this Research Letter.”

But Walach, who holds a doctorate in clinical psychology from the University of Basel, Switzerland, told Just The News in an emailed statement that JAMA didn’t specify how he failed “to provide sufficiently convincing evidence” to back his conclusions.

“I would actually also like to see how those conclusions were reached, but I am afraid that there was no solid conclusion,” he told the outlet. Walach pointed to “potential public health implications” as a “key phrase” in the retraction notice that, to him, suggests “the retraction was political, because some people did not like our data.”

Walach’s study has, thus far, drawn 21 official comments, most of which are critical. In a written response to the comments (docx), Walach and colleagues defended their research.

“Facts are not constituted by single studies, but by multiple replications and discourse,” they wrote. “This is the first peer-reviewed study of carbon dioxide content under face masks in children in a short measurement set-up. The measurements, we contend, are valid and were conducted by individuals with high content expertise.

“If someone doubts our results, the way to go is not to claim they are wrong without proof, but to produce better and different results.”

This comes as the American Academy of Pediatrics (AAP) on July 19 issued updated guidelines for school reopening, urging all staff and children over the age of 2 to wear masks in schools, regardless of vaccination status, a posture that is stricter than the mask-wearing guidance issued by the Centers for Disease Control and Prevention (CDC).

The AAP called its new guidance a “layered approach,” which includes recommendations for building ventilation, quarantining, as well as enhanced cleaning and disinfection.

The association said universal masking is necessary because much of the student population is not eligible for vaccines, and “masking is proven to reduce transmission of the virus and to protect those who are not vaccinated.”

There are dozens of circumstantial studies suggesting that masks work to stem the spread of the CCP (Chinese Communist Party) virus, which causes the disease COVID-19, although there has been just one randomized-control trial during the pandemic, carried out in Denmark. The researchers found that wearing a “surgical mask when outside the home among others did not reduce, at conventional levels of statistical significance, incident SARS-CoV-2 infection compared with no mask recommendation.”

Senators in New Jersey recently held a hearing to explore the efficacy and negative effects of mask mandates in schools for children. They found that the scientific evidence doesn’t support such mandates.

Mask wearing amid the COVID-19 pandemic has become a hot-button issue, with some questioning the efficacy of facial coverings and others opposing mandates on grounds of personal liberty. Advocates, on the other hand, have broadly taken a better-safe-than-sorry approach in the face of underpowered efficacy studies, while generally viewing mandates as a minor inconvenience that helps protect people who are prone to serious complications if they get infected.