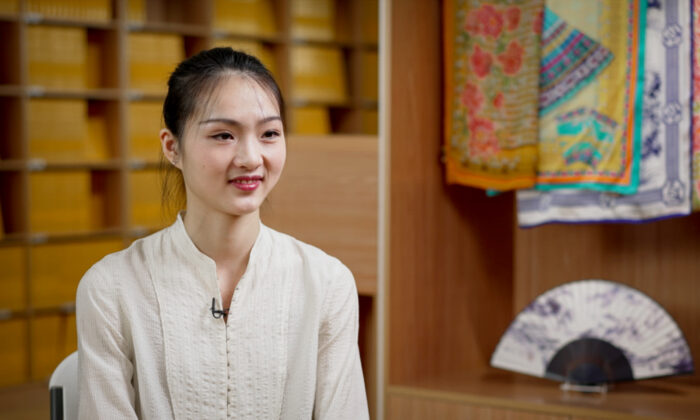 What 'beauty' means to an artist whose mission is to revive 5,000 years of civilization
By Catherine Yang
biggersmaller
Print

Evangeline Zhu was at Lincoln Center in New York, hours away from stepping on stage, when she got the news: The show would not go on. In the 14 years that Shen Yun Performing Arts had been performing, seldom had there been a canceled show—though the Chinese Communist Party has certainly tried to have Shen Yun canceled. Zhu thought it was a joke; it turned out to be anything but. A pandemic was sweeping across the world, shuttering gathering places and venues for art and entertainment.

It was a year and a half before Zhu could come face-to-face with the audience once more. In September, she took to the stage in Stamford, Connecticut, with a heart of gratitude.

“It’s pretty exciting,” she said ahead of the show. “It’s been a year since I’ve seen an audience.”

In that interim period, Zhu and her dancer colleagues in Shen Yun have kept busy. In recent years, the New York-based dance company has been perfecting and reviving a dance method that has been lost to modern-day China.

Zhu says that dance is a body language. “You have to use your body to express what you’re feeling, to communicate your message to the audience,” she said.

As such, the ancient method of “shen dai shou,” or the body leading the arms and hands, has completely changed the way Shen Yun’s classical Chinese dance looks on stage. In essence, the technique does exactly what its name says: The body leads the arms and hands into movement, and the body is alive with movement in dance.

A requirement of this method is that the force driving upper body movement begins at the center of the body, over the heart. So essentially, you are dancing from the heart, and the dance is even more expressive, Zhu explained. “After learning this method, our classical Chinese dance is grander, clearer, and gives people this sense of brightness.”

This is a method that appears only in name in old dance and pedagogy books, but the instructions for how to do it and how to teach it have otherwise been completely lost. Yet, those who are familiar with Shen Yun’s mission seem to grasp why Shen Yun is the only dance company that has recovered this sought-after method: Shen Yun seeks to revive the true traditional Chinese culture, Zhu said.

She explained that from careful research and restoration of traditional dance techniques to living out traditional values, like the Confucian virtues of benevolence, righteousness, propriety, wisdom, and fidelity, all of Shen Yun’s artists have pursued this path of tradition in order to bring audiences something truly bright and positive.

“Dance expresses what is in your heart, and Shen Yun’s dancers are, step by step, cultivating their character, working on their hearts,” she said. “We strive to do everything to the standard of truthfulness, compassion, and forbearance.”

Zhu’s mother had an unrealized dream of being a dancer, so before she had Zhu, she had the thought that if her child ever showed an interest in dance, she would support it. As a young girl, Zhu took dance classes, but she had no concept of dance as a career. And then she heard of Shen Yun.

“I think it was fated,” she said. She saw what looked like ethereal beings gliding across the stage, and remembers the physical sensation of what felt like a winged horse-drawn chariot soaring above her during the show’s opening. Becoming part of Shen Yun became her dream.

This is another thing that Zhu thinks Shen Yun does differently: From the moment the curtains open, the audience is invited into a world that is bright, beautiful, and wonderful.

“There’s actually a lot of hopelessness and listlessness in the world, but then suddenly you see this scene of wonder, and it kind of washes away the negative. … You see something bright and positive—and grand. You experience something greater than yourself, and somehow the day-to-day troubles feel lesser.”

“Dance and music transcends culture; this is why any audience understands Shen Yun,” Zhu said. “Things like truth, goodness, and beauty are universal.”

“And I think art that can inspire and elevate people is what is truly beautiful,” she said. “Art can elevate us—and I think art is something we all need in our lives.”