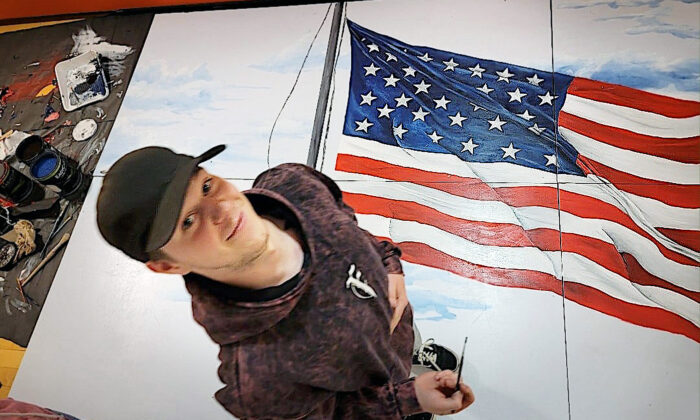 The son of two U.S. Air Force veterans has made his town proud by painting an American flag mural for his high school—a project that took a whole semester to complete.

Eighteen-year-old Hunter Delsite, from the military town of Mountain Home, Idaho, tackled the project with encouragement from his art teacher. The pair noticed that every classroom had a flag to say the pledge to, except the gymnasium.

The young artist was up for the task of painting one, though.

“I started drawing it out and it took a while to get it done,” the Mountain Home High senior told KTVB 7. “Then it was figuring out how big to do it.”

Delsite settled on a mammoth 8-by-16-foot composite mural, a surface that would take him over 3 months to cover and finish in full detail. It’s the teen’s largest project, to date.

The artist drafted a flying flag, rippling in the wind, the colors bold and bright, with a pole and cable across an overcast sky, with a stark white background creating dramatic contrast.

The plan was to to have it mounted in the gymnasium, behind the bleachers.

Delsite has practiced art for years, but started taking it “a lot more seriously” when he landed Brenda Raub as his art teacher—who pushed him to take his work further.

She said she’s lucky to have had Delsite as a student and was impressed with him from the start.

“When you have a kid that you see for four years and teach, and they just keep doing amazing things, there’s just not much you can ask for,” she told the station.

It wasn’t just for the school that Delsite took on the project, though; he also painted it for his parents who once served their country as Airmen.

While working, Delsite contemplated the flag’s significance, and what it mean to him—union, freedom, and being able to speak one’s mind.

“The flag to me really means coming together, that union of all of us … Americans are really from everywhere,” he said.

Raub posted photos of her student’s finished work on Facebook; both teacher and student were blown away by the reception it garnered, as likes, comments, and shares amassed.

“Everybody loves it,” Delsite told the station. “I just thought I would put it on the wall and people would say the pledge to it. There has been a lot of love for it.”

The painter graduated on May 28, and now plans to study architecture at the University of Idaho—leaving the mural behind to inspire future classes of students.

“It’s really, really awesome to get to say that I left something that big here at the school, you know?” Delsite exclaimed. “Not a lot of students get to do something like that.

“It makes me really happy.”