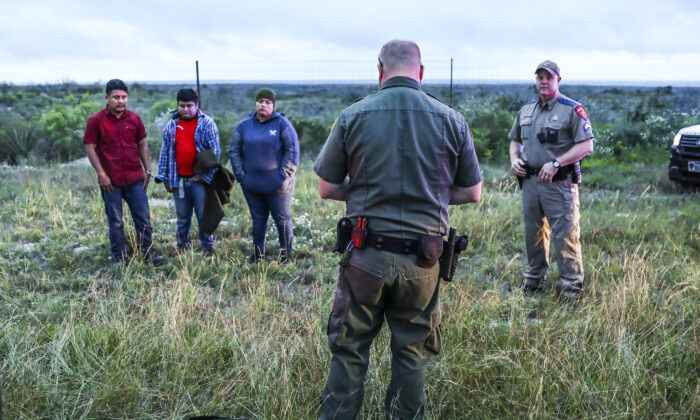 Apprehensions along the U.S.–Mexico border in October set a new record for the month, unpublished data obtained by The Epoch Times show.

Border Patrol logged about 163,000 arrests of illegal immigrants at the northern and southern borders, according to preliminary data that doesn’t include Customs and Border Protection’s Office of Field Operations (OFO). While arrests at the U.S.–Canadian border are typically less than 100 each month, the OFO has recently recorded at least 5,096 arrests per month.

While the total apprehensions are down from the previous month, they established a new record for October, easily clearing the 91,410 arrests recorded in October of 1999 and well above the figures seen during recent administrations.

“It’s an improvement, but it’s still four or five times the level that we saw during the Obama or Trump administrations,” Steven Kopits, president of the Princeton Policy Advisors, told The Epoch Times.

The new October record isn’t the only one set by the Biden administration. The arrests last month mean the administration has presided over the year with the most arrests, with two months still left to go.

For the full year, Princeton Policy’s forecast stands at 1.87 million apprehensions, up from the prior record of 1.61 million set under the Clinton administration in 2000.

Most of the October apprehensions took place in the always-busy Rio Grande Valley Border Patrol sector in Texas. But agents in other areas also made significant arrests, with the number breaching 22,400 in the Yuma, Arizona, sector.

Illegal border crossings have exploded since President Joe Biden took office in January. The Democrat quickly reversed or altered key Trump-era border security and enforcement policies, including halting the construction of the border wall and stopping the “Remain in Mexico” program. The administration also ended the expulsion of many illegal immigrants despite the COVID-19 pandemic and released hundreds of thousands into the U.S. interior, some without official papers to appear in court.

The Biden administration, which has called Trump-era policies “inhumane” and “cruel,” has said its immigration system overhaul will take time to complete.

Secretary of Homeland Security Alejandro Mayorkas has said the agency’s three-part plan is to invest in countries that people are leaving, to build “safe, orderly, and humane pathways” for immigration, and rebuild the asylum system and refugee program.

Scores of illegal immigrants have said they’ve traveled to the United States because of Biden’s policies. Mexico’s government also appears to have become more lenient with illegal immigrants transiting through since Biden took office.

Many Haitians who crossed into a primitive camp under the international bridge in Del Rio, Texas, recently told The Epoch Times that now was the time to come because it was easier to get in and stay in under Biden. The majority had been living in Chile or Brazil for years.

“Those gotaway numbers are higher than I’d have expected—they’re equivalent to 30 percent of apprehensions,” Mark Kirkorian, executive director of the Center for Immigration Studies, told The Epoch Times in an email.

The decline in arrests from September may stem from a decrease in the number of U.S. job openings, Kopits said.

Correction: A previous version of this article misstated when the Biden administration would set a new yearly record. It already has. The Epoch Times regrets the error.