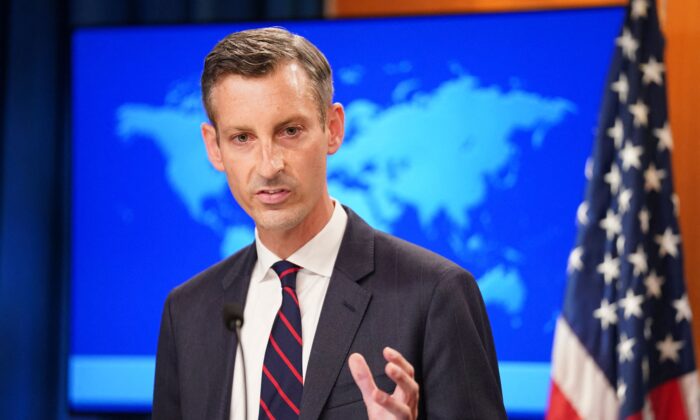 Another 21 Americans Evacuate Kabul via Charter Flight: US State Department

More than 20 Americans were on board a Qatar Airways flight from Afghanistan to Doha on Sept. 19 and have safely evacuated the Taliban-controlled country, the U.S. State Department confirmed on Monday.

“We can confirm that a Qatar Airways flight departed from Kabul … with 21 U.S. citizens and 48 lawful permanent residents on board,” State Department spokesperson Ned Price said in a statement.

“We are thankful to Qatari authorities, who continue to coordinate these flights with the Taliban,” he added. “As we have stated before, we will continue to help U.S. citizens, lawful permanent residents, and Afghans affiliated with the U.S. government to depart Afghanistan.”

The latest departure was the fourth Qatari chartered flight carrying civilians from Afghanistan to Qatar since U.S. forces withdrew from the war-torn nation last month after the country’s swift takeover by Taliban insurgents.

Qatari assistant foreign minister Lolwah Rashid Al-Khater said that besides Afghans and Americans on board the airliner, citizens from Germany, Belgium, Ireland, Canada, France, Italy, Britain, Finland, and the Netherlands were also part of the evacuation operation.

Khater said that “more than 230 passengers” were on board the Sept. 19 flight. The evacuees will initially stay in a compound in Doha, the capital of Qatar, which is currently hosting Afghans and other evacuees.

“Qatar will continue its collaboration with international partners on efforts that ensure freedom of movement in Afghanistan while working with various parties on the ground towards more general progress in the country moving forward,” a Qatari official who was not identified said, Reuters reported.

On Sept. 18, one day before the latest Qatar Airways flight departed Kabul, the U.S. State Department confirmed that 28 Americans have been flown out of Afghanistan since the full withdrawal of U.S. troops.

“We can confirm that a Qatar Airways charter flight departed from Kabul yesterday with 28 U.S. citizens and 7 lawful permanent residents on board,” Price said in a statement, suggesting that the evacuation succeeded because of the Taliban’s cooperation.

Between 100 and 200 U.S. citizens were believed to be in the country when American troops exited on Aug. 30. That number remains above 100, but “it is closer to 100” than 200, White House press secretary Jen Psaki told reporters in Washington.

President Joe Biden stuck to his self-imposed Aug. 30 withdrawal deadline, even as he promised to keep troops there until all Americans who wanted to get out were able to leave.