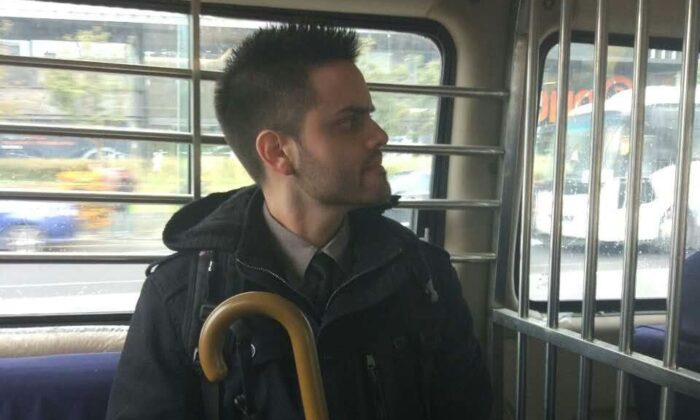 Steven Schaerer on the way to detention in China after being illegally arrested. (Courtesy of Steven Schaerer)
Northern California

SANTA CLARA, Calif.—Steven Schaerer, originally from the San Francisco Bay Area, is a survivor of detention in China with a harrowing story to tell.

After graduating from college, he worked in Beijing for five years and, while in his 20s, founded an educational consulting firm. In October 2016, while still in China, he was wrongly accused of illegal employment, arrested, and thrown into prison, even though he and his employees were all legally employed with visas. He said the Chinese regime often views foreigners as a threat, especially if they are successful.

“And so, when I was in interrogations for hours with Chinese police officers, one of the first questions, one of the questions they routinely ask was, ‘Do you know how much money we make?’ And they were looking at my tax documents, and they said, ‘Do you know how much you make? You make more than we make,’ kind of implying that was in and of itself illegal. I should not as a foreigner be making more money domestically in China than the police officers.”

Schaerer was imprisoned in what he describes as a full military-style detention center, with 20-foot-high metal walls and armed guards around the perimeter. Prisoners were stripped naked, marched through metal detectors, had their blood drawn, and had all their belongings taken away. The cell conditions were something people living overseas cannot fathom, he said.

“You are sharing this one single, moldy, disgusting squatter toilet among 17 inmates, locked in this 24/7. You are eating out of a communal trough … they basically pour some kind of yellow sludge into a bucket, through a funnel in the door. Seventeen inmates just try to rush and try to eat this out of a bucket.” Schaerer said.

“The conditions are horrific; they’re designed to kill you. There are suicide warning signs plastered on the walls.”

They slept with blood-stained blankets on frozen wooden planks with bright fluorescent lights beaming down the whole time. They took turns keeping watch, making sure that prisoners didn’t kill each other during the night. They were also constantly told they couldn’t contact anyone in the outside world. He was imprisoned for a little under a month.

By the time that Schaerer was finally deported and was safely back in San Francisco, he was malnourished, sleep-deprived, and sick. He had to go through therapy to readjust to living normally again.

He wrote a book detailing his entire experience, titled “Surviving Chinese Communist Detention,” which was released in May. In it, he shares stories about other groups of people who were detained, tortured, and executed for their beliefs: Falun Gong practitioners, Muslims, Uyghurs, Chinese Christians, Tibetan Buddhists, human rights lawyers, and political dissidents.

His experience provided him with a newfound appreciation for the U.S. Constitution and the rights that protect people in the United States.

“That is kind of one of the things that keeps you motivated every day to share your story, to share my story, to share this story, with the rest of the world and to kind of warn people and say, ‘Hey look, we don’t want encroaching CCP influence here in the West,’” Schaerer said.

While he was given a three-year ban from China, he says has no plans of returning, as long as the country is still communist.

Schaerer, who now works in technology, is sharing his story on multiple platforms.